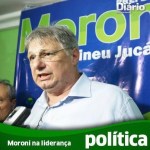 [The second part of a translation of an article written by Emanuel Santana and published on the Brazilian group blog, Vozes Mórmons. The article raises many questions about politics and the Church—questions we are familiary with in the U.S. and perhaps Canada, but which are new territory for Mormons in Brazil and elsewhere around the world. Part one of this series was published yesterday.]

Moroni Torgan and the Church in Fortaleza

Out of the books and stories of their elders.

I can not remember anything of Moroni’s first election, since occurred just a few years after I was born. His subsequent elections, as lieutenant governor, and again as a member of the House of Deputies, I remember somewhat. The political rallies were lively, including comedians, forró bands and gifts meant to encourage people to come. In Brazilian elections, each candidate is assigned a number which is used by the voter in the electronic ballot box. Moroni’s number for the House of Deputies election was 4512. Given his track record of fighting crime, he claimed that this was his number because he walked, with a “45” in one hand and a “12-gauge” in the other. This tag line proved its worth since Moroni won all three elections he contested in the nineties.

In 2000 Moroni sought the mayoralty of the city of Fortaleza for the first time. He had split away from Tasso Jereissati and shifted his allegiance to the PFL (Liberal Front Party – a center-right political party in Brazil). The popular Juraci Magalhães tried to win re-election, and from the beginning polls pointed to his victory. In addition to Moroni and Juraci, there were two significant candidates in the election: Patricia Saboya (the first of two Patricias who married later presidential candidate Ciro Gomes) and Inácio Arruda.

Expectations among Church members were high. Allusions to the Mormon candidate were constant. Whenever anyone at church spoke of patriarchal blessings, it was claimed that Moroni’s blessing contained a promise that he would be a “famous politician in Brazil,” and that this promise had already been fulfilled, since he was an active Congressman.

During the campaign season, Moroni himself would visit the wards in Fortaleza and was often invited to come to the pulpit and give his testimony after being introduced by some local leader. “Brothers, think carefully before voting. We have a chance to elect a mayor who every day asks Heavenly Father for advice on how to lead this city,” was part of the speech my bishop gave in sacrament meeting. I remember asking him if that statement did not violate the church’s policy of neutrality in elections. “Those were the exact words that the Brazil Area president said at the conference in another stake. I also thought it was strange. I’m just repeating what I heard,” answered the bishop.

Moroni’s campaign held a rally especially for church members at a large private school in the city. Buses were sent to the stakes to take people to the rally. I took a neighbor to this meeting, explaining to him that although those attending were almost all Mormons, it was not a religious meeting and the church had no connection with it. However, the first girl I introduced him to asked him a question that made clear what was in the minds of the young people who were on the bus: “Is the first time you’ve been to a church activity?”

The school gym was full. Members from all the stakes in the city, eight at the time, were in attendance. Many politicians and church leaders were on the dais. Moroni commented on the joy of gathering the brethren of the church there and made some comparison with the army of Helaman. I remember little of the speeches, since I was less than one year shy of sixteen. My main concern was “preparing the ground” with the “laurels” and “mia maids” for the following year, when I could date.

After the speeches there was a party, a “dance” as we call it in church. Since those in attendance were overwhelmingly LDS, it was decided that the event would end before 11:30 p. m., because the next day was Sunday. My stake’s bus was one of the first to leave (to my chagrin), but not early enough to prevent me from seeing some of my fellow church members dancing to a song in which the singer repeated over and over his favorite sexual position.

Juraci Magalhães was re-elected that year. The PFL candidate was in third place, beating the former first lady. Third place wasn’t bad, given that Juraci and Inácio were the most recognized names in the city, while Moroni was still closely associated, in the popular imagination, with the Tasso Jereissati, whose electoral niche was more in the country than in the city of Fortaleza.

Two years later Moroni was elected as a federal deputy for the third time.

← The Rifts of Rime
Moroni Torgan and the Church in Fortaleza, Brazil (part 3) →