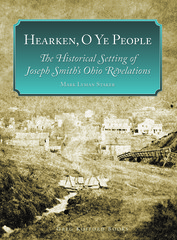 I received my review copy of Hearken, O Ye People at work; I opened it and began to read on the El heading home. And, from page 1 (or, actually, page xvii), my jaw dropped. Staker opens his book with an almost-15-page chronology of Kirtland, beginning in May 1796 as a group begins to survey townships in the Western Reserve and ending on July 6, 1838, when Kirtland Camp leaves Kirtland to settle in Missouri. For that chronology alone, Hearken, O Ye People is worth its price, at least for those for whom the Kirtland years are overshadowed by the founding of the Church in upstate New York, the conflicts and eventual extermination order in Missouri, and the theological and organizational innovations in Nauvoo. Because, it turns out, Kirtland wasn’t merely a flyover town in the Saints’ constant move westward; more canonized revelations occurred in or around Kirtland than any other location. To understand our canon, then, it is helpful to understand what happened in Kirtland that led to these revelations.

Chapter 1 immediately introduces “Black Pete,” a former slave who became a member of the Morley Family in Ohio, and later, when the Morley Family became Mormonites, a Mormonite. Staker argues that he introduced some ecstatic traditions into Mormonite practice. I get the impression that Staker’s attribution of certain things to Black Pete is speculative—Pete himself was illiterate, and there appear to be few documents specifically referring to him—but it is based in Staker’s deep familiarity with religious practices of the early 19th century.

That said, Staker didn’t quite convince me of the centrality of Black Pete on the early Kirtland church. Yes, he was a member of the Morley Family, and yes, the idea that the Kirtland church may have incorporated Black Church practices is fascinating. Still, the evidence seems thin at best. And Hearken, O Ye People does its part to undermine Black Pete’s essential part: after Part One ends, he is, to the best of my recollection, not mentioned again.

And herein lies one of my big frustrations with the book: Part One takes us from 1770 to about 1836. Then Part Two goes back to about 1814. It traces the history of other people—in this case, N.K. Whitney and Sidney Gilbert—but it never situates their stories in relation to the stories from Part One. Instead, it lays out a parallel chronology. I remained largely confused during Part Two as I tried to figure out how it connected with the world of Black Pete and ecstatic religious experience I had just read about. Eventually, it occurred to me that the book could more fruitfully be read as a series of independent topical essays and, as I read it that way, my frustrations began to melt away.

And melt away they should. There are details and background that shed interesting new (to me, at least) light on some pretty fundamental parts of our history. Staker provides context for many of the revelations that have been canonized in the Doctrine and Covenants, explaining the context of the questions answered by the Lord. His description of Shouting Methodist practice, and how Joseph’s First Prayer both followed and substantially broke with Shouting Methodist prayer practice provides an amazing early example of Joseph’s ability to provide new meaning to old practices. (See pages 133-136.) Fascinating vignettes provide the reader with a picture of a world substantially different than her own. We learn about cheese-making (p. 270), about making potash, “an excellent cash product,”  (p. 210) and, dear to my heart, a farmer’s take on his son who studied an practiced law: he “never loved that creature called work.” (p. 273.)

Hearken, O Ye People ends with a lengthy description of banking in Ohio, from the general lack of specie to unchartered banks to the Mormonites’ attempt to get a charter for the Kirtland Safety Society to the fallout from its failure. And this discussion of banking was, for me, a high point to a pretty remarkable book. Though I knew the broad contours of the rise and fall of the Kirtland Safety Society—Mormonites tried to form a bank, couldn’t get a charter, issued notes anyway, it all ended up collapsing, and land speculation may have been involved—Staker provided the details. For example, subscribers for shares didn’t put the full amount down at once. Instead, the Society could theoretically make capital calls (my terminology, not theirs). Banknotes represented loans that had to be repaid. And the liquidity that the notes created increased local wages substantially, until, as the notes devalued, wages again fell.

I still dream of a chronological history of the Mormonite experience in Kirtland. But I guess the chronology at the front of the book essentially provides that, and the rest of the book provides priceless details and context for those occurrences. While there are still glaring gaps in my knowledge about the Kirtland years, those gaps are now significantly fewer and less glaring than they were before. The book takes work to navigate—any detailed 600-page book would, of course—but it is worth the effort to read, and it would make a welcome addition to the Mormon history section of anybody’s bookshelf.

8 comments for “The Kirtland Church: A Review of Hearken O Ye People”