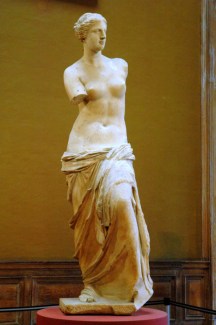 The same drive which called art into being as a completion and consummation of existence, and as a guarantee of further existence, gave rise also to that Olympian realm which acted as a transfiguring mirror to the Hellenic “will.” The gods justified human life by living it themselves—the only satisfactory theodicy ever invented.

During part 1 I described for you my personal awakening to the existence of Heavenly Mother. In this post, I’ll explore some of the implications that discovery had for the way I view God, religion, and myself. (Also see parts 3 and 4)

It’s funny, it wasn’t until I became experientially aware of the reality of Heavenly Mother that I realized there is a gigantic hole in the way I had been imagining God. All of a sudden, in the midst of a deluge of male pronouns in scripture and hymn and church discourse, all I could hear was a deafening silence about the feminine side of God.

Women and men of many religious traditions seek out and worship versions of the Divine Feminine. But Mormon doctrine contains certain points that render a female aspect of God peculiarly relevant.

Part of Joseph Smith’s departure from mainstream Protestantism was his unorthodox view of the Godhead as completely separate individuals, and the even more radical proposition that God the Father and Jesus Christ have glorified, perfected, and immortal physical bodies.

Joseph Smith described the spirits of human beings as the literal offspring of God who lived with Him before birth. He taught that God the Father had at one time lived a mortal life like Jesus, and like us. From this followed our ultimate goal to return home to live with God. We were to eventually be not only with Him, but also like Him. This doctrine was encapsulated by Lorenzo Snow’s celebrated epigram: “As man now is, God once was. As God now is, man may be.”

I’ve always found this idea inspiring. Just as our children look forward to growing up to be like us, we look forward to growing up to be like God. And the trials, pains, and joys of human life are the best possible preparation we could have in our progress toward that eternal goal. As Nietzsche once said (although he might be startled to find his philosophy wrested into the service of Mormon theology), “The gods justified human life by living it themselves—the only satisfactory theodicy ever invented.”

To continue my Mormonized version of Nietzsche’s words, when we view our life in light of Snow’s couplet, God really does become a “transfiguring mirror”; As we look deep into what He is, we see what we can become, and are transformed. In the words of Joseph Smith, “If men do not comprehend the character of God, they do not comprehend themselves.”

Only recently have I felt the irony of reading that statement as a woman. Who is this God I am to comprehend and someday become like? The Heavenly Father we worship is spiritually, physically, and in every other way male. What is the character of His shadowy female companion? Who am I really if my divine counterpart is a mysterious cipher?

Over the past year or so, I have contemplated those questions over and over, mostly to myself and my husband, because as you may have noticed, we barely ever talk about Heavenly Mother at church. A few months ago, when the Relief Society President in my ward solicited anonymous questions for the Stake President to answer at a special meeting during Ward Conference, I thought I’d give it a shot. So on my little slip of paper I wrote, “Tell us everything you can about Heavenly Mother,” and then folded it up and dropped it in the box.

At the very least, I thought it might inspire an interesting class discussion. Sure enough, a few weeks later I sat in Relief Society listening as the Stake President answered a list of truly random questions. When he got to mine, he said he wished he’d had time to research the topic, but had been very busy.

Despite lack of research, he was able to repeat off the top of his head the oft-heard platitude that we don’t really talk about Her because “Heavenly Father has put her on a pedestal and wishes to protect her from anyone who might profane her name.” The woman sitting next to me chimed in that perhaps we don’t talk about Heavenly Mother because if we talked about Her too much, we might start worshiping Her, “like the Catholics have with Mary.”

I find both of the above-referenced ideas fascinating. Neither is a real doctrine of the Church, but both are widely held. The first, which is colloquially known in the Church as the principle of “sacred silence,” paints a sort of traditional Victorian portrait of an idealized woman. I suppose we could stretch the interpretation to mean that Heavenly Father and Heavenly Mother agreed together that She should not be spoken of by Her children (although being a mother myself, I would find that an odd move for a divine mother to make). However, people putting forth this idea invariably cite the Father as the only actor, who has decided to protect Her by rendering Her invisible to Her children. No mention is ever made of how She might feel about the situation, let alone the idea that She might participate in decision making of this sort. It is odd to me that this is our picture of the essence of exalted womanhood.

Meanwhile, at the Pagan Fertility Cult

The second idea disturbed me even more, though. The underlying premise seems to be that there is something unthinkably wrong about anyone worthy of worship being female. I see no logical basis for this idea. It appears to be more of a visceral rejection than anything else. But if we worship our Father, what could be inappropriate about worshiping our Mother? Is there something inherent about being female that makes Her unworthy of worship? Is She a lesser being, not quite as divine as the Father, a sort of demi-goddess? Or not divine at all? Is She perhaps just some lucky woman who ended up married to God?

In conjunction with the horrified “but we might start worshiping her!” members sometimes bring up the pagan fertility cults (presumably involving worship of a divine female figure) that are roundly condemned in the Old Testament. I heard someone speculate the other day that perhaps the danger we’re trying to forestall when we avoid talking about Heavenly Mother is the impulse to turn her into a fertility cult. There seems to be a sense that worshiping a divine female figure tends automatically toward corruption and perversion.

This is disturbingly reminiscent of Medieval beliefs about the inherent impurity of women’s bodies and the supposed danger of their corrupting influence on men, just as Eve had, according to their theology, “ruined” Adam. In a church that honors Eve and views her decision to partake of the fruit as one of the most important and wonderful acts in the history of the world, I find it strange that we would retain these ideas about womanhood and our Divine Mother.

While the ideas that came up in that Relief Society meeting are not officially sanctioned by the Church, the functional silence about Heavenly Mother serves to reinforce them. This silence begins to seem much less “sacred” when I consider the devastating impact it has on many women of the Church, myself included. Consider again Joseph’s teachings about the nature of God and man. How can I possibly comprehend myself without comprehending the God(dess) who is my Eternal Mother? The connection between Her identity and my identity as a woman is too powerful to ignore.

When I look in that transfiguring mirror and find it empty, I wonder who my Mother really is. Is She tucked away in some lace-curtained corner of heaven, a shy sweet soul too busy gestating babies to hear Her grown-up children when they pray? Or is She omnipotent, omniscient, wonderful and terrible, and listening to my every cry with tender compassion and patient wisdom? Does she stand meekly in the background, nodding superfluous acquiescence to everything He says? Or do They stand side by side in counsel, power, and authority?

If gender is an eternal characteristic (which our Church vigorously affirms is the case), then presumably an exalted female is different from an exalted male. If those differences are in any way meaningful, then I need a divine female role model. When I stand in front of the transfiguring mirror of deity, nothing makes sense until I see Her looking back at me. Until I recognize the feminine as fully divine, it is impossible for me to recognize the feminine (myself!) as fully human.