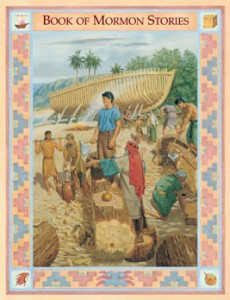 I love stories. A narrative strikes me as the most fundamental way of ideas with other people. And by ideas, I mean not only the bare events of the narrative, but also abstract concepts, morals, and emotional truths. It makes sense to me that our basic scriptural texts have strong narratives. The Old Testament is a collection of stories, with the consequences of one generation’s choices setting the stage for the actions of the next. The Book of Mormon also has very strong narratives.

Other classic stories that we are familiar with, we feel free to reimagine. We update fairy tales, retell myths in modern settings. Even the stories of Genesis are recognized as archetypes that we re-present and reinterpret. But too often Mormons tend to shy away from this type of creative engagement with the text and narratives of the Book of Mormon, perhaps from a kind of self-censorship that fears corrupting in some way the most true book on the face of the earth.

Unfortunately, that means that while we regard the book as wholly inspired (or just holy), it often remains dry and emotionally opaque to us. Although we are counseled to apply the scriptures to ourselves, we often don’t actually take the obvious first step of sympathizing with the people of the Book of Mormon as though they were real, feeling men (or women, for the few that are explicitly mentioned in the text). 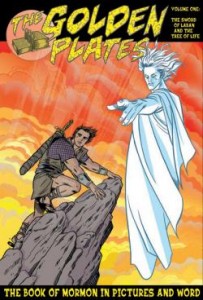 The unfamiliar names muddle together to the point that seminary students no longer know or care who did what. Is there that much difference between Coriantumr, Coriantumr, and Corianton? Or as adults review the reading for their Sunday School lessons, they often simply dismiss the reality of the prophets and other actors in favor of role-based identifiers, for example, “Abinadi was that prophet who Noah burned at the stake” without ever thinking of them as real, conflicted people.

Thinking of the Book of Mormon and its narratives as fixed begins with the indoctrination of our youth. The illustrated Book of Mormon Stories volume available from Church Distribution is a very static presentation. There is no action, and none of the characters seem particularly approachable. To be fair, there have been a few exceptions to the model that strands the Book of Mormon on an uncritical pedestal. One I remember from my youth was Chris Heimerdinger’sTennis Shoes Among the Nephites series. (I haven’t read any of the books for about 20 years, so I really cannot speak to its merits.)

But now there are a few new players on the Book of Mormon creative reinterpretation scene, specifically the graphic novel/comic book format. One is Michael Allred who has a classic Marvel style version of the Book of Mormon (See article in Slate here). I have not gotten my hands on a copy of this yet. 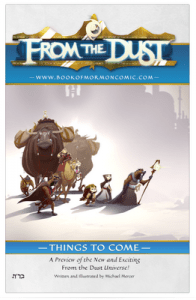 Another artist entrepreneur is Michael Mercer. I met him at the Provo farmer’s market this summer as he was building up buzz for his “From the Dust” series that re-envisions Jeremiah, Lehi, Nephi, and their contemporaries as animals. (See his blog here. Do not do a google search for “from the dust.” Trust me.) We have Mercer’s promotional comic as well as the character playing cards he printed. (Sunday my kids spent part of their afternoon using them to play go fish.) Mercer takes the Book of Mormon very seriously, and the kids love his graphic style.

And last, but not least, Stephen Carter and Jett Atwood have published a collection of their Book of Mormon comics previously published in Sunstone. (And another blog here.) My kids and I have enjoyed the comics since they began appearing in Sunstone, but I was surprised at how much more I liked them in the collected format. iPlates begins with the stand alone story of Ammon that sets the tone and graphic style for the rest of the episodes that follow Zeniff through Noah, Abinadi, and Alma.

The iPlates collaboration is a particularly good example of how the comic book medium requires reader interaction. All graphic works force the reader to participate with the narrative in a different way than text only words do. One example is the visual representation of the passage of time as the dumbstruck King Lamoni stares at Ammon over the pile of severed arms. It is easy to skip over that in the regular text, to move on to the action, but the graphic form slows the reader down, gives them the visual prompt to consider awkwardness of that silence. Carter and Atwood are also good at visualizing characters who develop through time. Young Zeniff the spy is fleshed out, as are the Lamanites he had been taught to caricature. He matures and ages, as does his son Noah. The drawings of the characters show how each person is a single, continuous entity, even as his choices and experiences change and mold him through time. 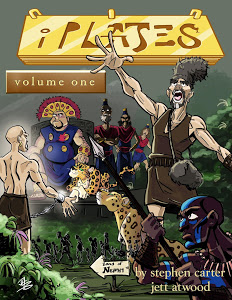 None of these comic representations of the Book of Mormon is as radical and as faithful to the text as is The Book of Genesis Illustrated by R. Crumb. But they all good steps in making the Book of Mormon our own, of telling it and retelling it in creative ways so that narratives are freed from the dryness of untouchable texts, and the stories come alive to us. Through the stunning desertscapes of From the Dust and the bold, dynamic strokes of iPlates we have been given new eyes to see the Book of Mormon. And who doesn’t love pikachu-style sheep?

Disclosure: Stephen gave me a copy of the iPlates. I had a hard time reading through it because the kids kept taking it away from me.

12 comments for “Book of Mormon Comics”