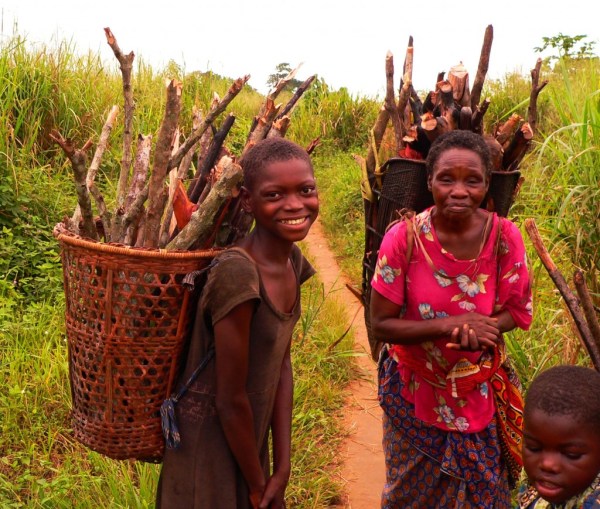 I won’t lie, I was frightened going to the Democratic Republic of the Congo.1 So frightened that I refused to pack, and wouldn’t get dressed even when the taxi was on its way to carry us to the airport. I’ve been to some wild places in the middle of nowhere. I’ve lived several places that scare the hooklajulie out of my family and friends. I even honeymooned in the midst of the second Intifada in Palestine/Israel.  But the DRC scares me to the point of my joints cramping and impeding action. I’ve read a lot about the sufferings and imagined the horrors (particularly to women), and I just didn’t want both James and me to be on our way to a land still lost in the repercussions of a decade of war and the long-term struggles endemic to post-colonialism. The thought of orphaning my biological children while in the process of going to adopt two more kept me awake during the weeks leading up to the trip. 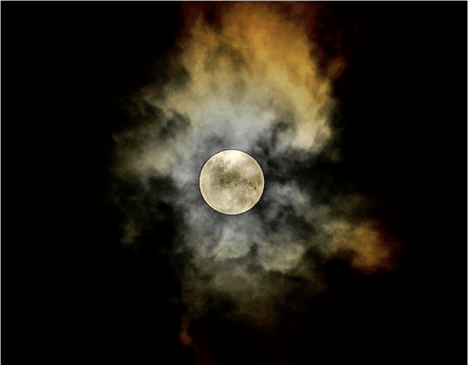 Then there was the omen-esque timing. We flew out on the 29th of October, the Hunter’s Full moon. In ancient Norse religions this is when the veil between the living and the dead is transparent, the day you can sail to the Isle of Shining and speak to your sleeping ancestors.  You leave an apple on your window sill so that the Golden Stag (symbol of the Father God) will come to you in your dreams and let you ride on his back as you travel to that island. As Elder Scott said, “Revelation can … be given in a dream when there is an almost imperceptible transition from sleep to wakefulness. … Inspired communication in the night is generally accompanied by a sacred feeling for the entire experience. The Lord uses individuals for whom we have great respect to teach us truths in a dream because we trust them and will listen to their counsel. It is the Lord doing the teaching through the Holy Ghost. However, He may in a dream make it both easier to understand and more likely to touch our hearts by teaching us through someone we love and respect.” It’s a beautiful night and a beautiful tradition and I love the sacred truths I find studying world religions (one of our subjects in homeschool). But learning about this particular tradition made me think of sailing to the land of the dead under the rays of the full moon riding on the back of our Boeing 737 rather than a Golden Stag, and was nothing close to comforting.

We got to DRC on October 31st. They don’t celebrate Halloween, they celebrate All Saints Day on November 1st, the day we flew out. All together, it was just too much death for the moment. Too many black cats, although I usually love black cats. Way too many cemeteries out the window of the plane as we were landing, although I usually love the peace and beauty of cemeteries. It was several days of the dead and omens of death, coupled with a visit to a country riddled by violence and 5+ million orphans, many of whom are on the brink of death. Despite all of these omens and reminders of my mortality, I feel like I gained a new ability to understand the connection between death and life, and it culminated in a joyful reunion. We got to see the twin girls who will soon come home to our family. (“Immerse yourself in searching for your ancestors [and posterity]. … I can think of no greater protection from the influence of the adversary in your life.”)

On Día de los Muertos, the Day of the Dead, November 2nd in Mexico, families have festive picnics in the cemeteries in honor of their beloved dead. They eat the favorite foods of those departed and offer some on a plate by the tombstones. I don’t know if it is normal, but we just read about one practice where instead of throwing the plates of food away, families add it to their compost pile. In this way the offerings to deceased family provides one with food in the coming year as gardens grow off of the nutrients from their Day of the Dead meal, and this cycle of the dead sustaining the living is continued again and again. Just as the dead mother tree’s rot feeds the newly covered seedling acorns we continue to live because of the offering of those who came before us. (“Anyone who stands at this pulpit to deliver a message feels the strength and support of members throughout the world. I’m grateful that that same support can come from a beloved companion on the other side of the veil. Thank you, Jeanene.”) 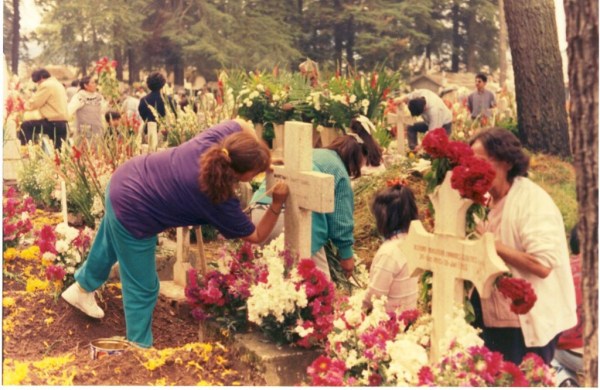 Tonight, (we had serious jet-lag and so we were a day late) we celebrated Día de los Muertos as a family. No picnic because we have no cemetery that we can enter (Qataris apparently see a cemetery as ritually unclean and so women never visit them and men very rarely). But we gathered with pictures of those we have lost and love and we told stories of them and ate some of their favorite foods. Well kinda. Grandpa Maxwell and Grandpa Owings apparently loved rabbit stew, and I ain’t got no rabbit other than the neighbor’s annoying pet that poops in our yard (I know, I know, so I had a rabbit that was begging for a stew pot, but I’m not that kind of neighbor). We had salmon stew and thought of them chasing rabbits. For Grandma Maxwell, our girls freshly squeezed lemons and we made lemonade with stevia, just as she loved it. For Grandma Owings it will be biscuits and jam in the morning. Our decorations of pale pomegranates and pink lady apples are for you Granny Pink.

And I realized, that the veil was thankfully thin throughout this past week. Not that I was about to cross its threshold into that shining isle of death, but because these people  who love us so have watched over our family, and were overjoyed for us to meet the daughters that they have been watching over for months before we could greet them in person. “This work is a spiritual work, a monumental effort of cooperation on both sides of the veil, where help is given in both directions.” 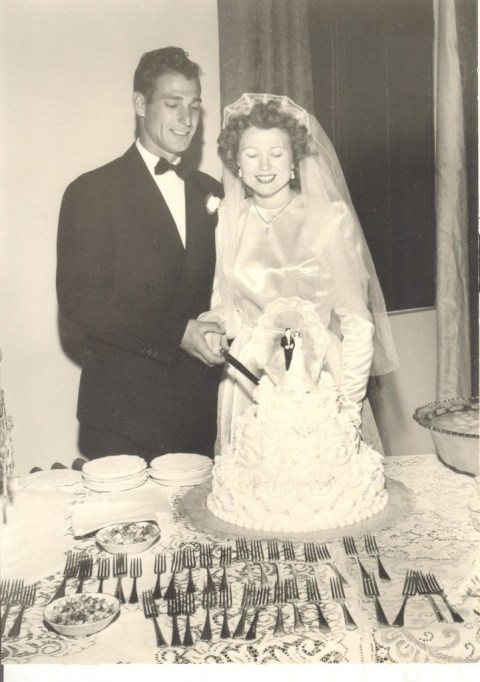 So here’s to you, our dearly departed. Jason, Justin, Aunt Donna, and our dear Grandparents. We’ll think of you with every piece of teeth-destructive delectable we enjoy this week (no, of course we did not replace tricker treating! Thank you to our friends who  took our kids sugar collecting while we were in DRC!). We’ll think of the power of love that binds families beyond the present that we can see, as we travel yet again to bring our little girlies home. (“Relationships can be strengthened through the veil with people we know and love. … We can strengthen our relationship with the departed individual we love by recognizing that the separation is temporary and that covenants made in the temple are eternal.”) 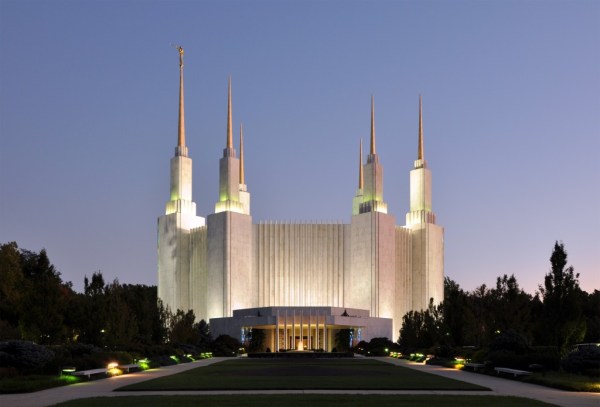 Our Day of the Dead has been a Day of the Living. A day to remember and work to strengthen the eternal bonds between us and our ancestors (still living but in a realm unseen), between us and our children. Elder Scott’s words have inspired us in our efforts. I believe, as Elder Scott believes, as President Joseph F. Smith believes: “I believe we move and have our being in the presence of heavenly messengers and heavenly beings. We are not separate from them. We are closely related to our kindred, to our ancestors who have preceded us into the spirit world. We cannot forget them; we do not cease to love them; we always hold them in our hearts, in memory, and thus we are associated and united to them by ties that we cannot break. If this is the case with us in our finite condition, surrounded by our mortal weaknes, how much more certain it is to believe that those who have been faithful, who have gone beyond can see us better than we can see them; and that they know us better than we know them. We live in their presence, they see us, they are solicitous for our welfare, they love us now more than ever. For now they see the dangers that beset us; their love for us and their desire for our well-being must be greater than that which we feel for ourselves.”

As often happens, I had many good intentions of dissecting and analyzing and commenting on the two talks – but if the road to hell is paved with good intentions, I’ve got enough raw materials to lay down an interstate. Instead I’m cheating. My wife and I (well, mostly my wife; but I helped) wrote a post on our family blog (here) weaving together our personal life and a recent trip to the DRC to visit the daughter’s we’re adopting with some of the themes from these talks. I’m copying it here. ↩

1 comment for “Dia de los Muertos: We Live in their Presence”