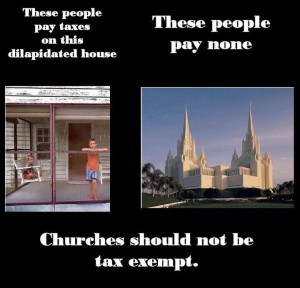 There is, I’ve been told, a Facebook meme going around, juxtaposing a decaying house and the San Diego temple to support the argument that churches should not be exempt from taxation.

And, like Facebook memes everywhere, this one is dumb. Dumb primarily because the first two statements are tautological, and its punchline doesn’t follow. Because of course a tax-exempt organization does not pay taxes that a non-exempt individual pays. That’s pretty much the definition of tax exemption.

Of course, saying that a Facebook meme is dumb and tautological makes for a pretty short and boring post. Far more interesting, imho, is to take seriously the point that the people spreading the picture are trying to make, and complicating that rhetorical picture a little bit.

Isn’t It Unconstitutional to Tax Churches?

There is, of course, some argument about this, and I’m not a constitutional expert, but I’d say almost certainly not. Churches already pay taxes on their unrelated business taxable income, they pay the employer portion of employment taxes, and, if they lose their exemption, at least one court has found taxing them to be constitutionally permissible.

Why Are Churches Exempt, Anyway?

Great question. And a hard one to answer. The quick reason is, “public charities,” including churches, have been exempt from federal taxes since the beginning of the modern federal income tax. And the exemption may merely be a historical artifact. It may be because churches provide services that relieve the government of needing to provide those services, or it may be to allow taxpayers to directly control some portion of government expenditure. At least one commentator asserts that churches are co-sovereigns and, as such, cannot be taxed by the government.

So, Then, Why Do We Want to Eliminate the Exemption?

The first thing that the picture leaves out is the why. Why should we eliminate churches’ tax exemption? A couple reasons that I can think of:1

(1) Revenue needs. That a church is exempt from tax means that the government gets less revenue than it would otherwise get (or, possibly, it raises the same amount of revenue, but each non-exempt taxpayer has to pay incrementally more to make up for the lost revenue). For the most part, this is probably not a compelling reason to tax churches. As I’ve explained elsewhere, imposing income tax on churches is unlikely to raise any significant amount of revenue.2

(2) Fairness. This seems to be the implicit argument of the picture: it’s not fair that these poor people3 have to pay taxes while the rich churches avoid them.

The thing about that, though, is that we need to articulate a theory of fairness. In tax law, we generally divide fairness into horizontal equity and vertical equity.4 Horizontal equity says that similarly-situated taxpayers should be taxed similarly. So, for example, a family of 4 with $30,000 of income should pay roughly the same amount of taxes as another family of 4 with $29,000 of income. A corporation with revenues of $1 million should pay roughly the same amount in taxes as another corporation with $1 million. Horizontal equity clearly doesn’t apply here: I’m not sure what the appropriate similarly-situated taxpayer is for a church (clearly another church; perhaps a humanism society?). A family, however, is clearly not a relevant comparison.

Is there another theory of fairness that would demand that churches pay taxes? I don’t know, but without it, a fairness argument kind of falls flat.

But there’s kind of a conflation going on, too: the picture deals specifically with the property tax. And there its argument (such as it is) breaks down on a couple levels.

Moreover, the property tax is (mostly) separate from the federal income tax.

States could, it turns out, probably tax church property. In colonial times, states exempted their established church from state property tax, while taxing dissenting churches.6 Over time, for various reasons, they began to remove churches from their tax rolls. Today, most states don’t impose their property tax on the property of churches and other tax-exempt organizations.7

Most—though not all—states base their tax laws on the Internal Revenue Code, and then vary it in particular and idiosyncratic ways. Most of them that I’m familiar with at least reference 501(c)(3) status, but it may or may not mean anything. In Illinois, for example, a federal exemption letter is relevant to getting a state exemption, but not definitive.

Which is to say, even if you were to eliminate the federal income tax exemption of churches, you may or may not cause them to pay property tax. That’s a state-by-state consideration, which often is—and even more often could be—de-linked from the federal rules.

Remember above where I said it’s probably constitutional to tax churches? Yeah, about that. See, churches have been exempt from federal taxation since at least the Revenue Act of 1894 (which was ruled unconstitutional, which ruling eventually paved the way for the 16th Amendment and the modern federal income tax). Starting from a blank slate, they almost certainly could have been taxed.

But we don’t have a blank slate. Which means that eliminating churches’ tax exemption today likely runs into constitutional problems.8 (And let me preface this with the fact that I’m basing my constitutional analysis on class I took almost a decade ago; feel free to update my Establishment Clause analysis in the comments.)

Basically, legislation that affects churches has to pass the Lemon test. Under this test, legislation affecting religion must (a) have a secular purpose, (b) not have a primary effect of advancing or inhibiting religion, and (c) not excessively entangle the government with religion. It seems to me that legislation that removes the tax exemption from churches fails this test; it’s hard to articulate a secular purpose (because it really doesn’t raise a ton of revenue) and it’s even harder to argue with a straight face that it does not have a primary effect of inhibiting religion.

That’s not to say that you couldn’t eliminate churches’ tax exemption. But you may not like the compromises it would require. Clearly, if Congress revoked section 501(c)(3) entirely, it should pass the Lemon test. But even if you are opposed to the exemption of churches, it’s not clear that revoking the exemption of hospitals, universities, museums, symphonies, the Red Cross, etc., is a price worth paying.

Alternatively, you could limit taxpayers’ deductions. Romney proposed limiting deductions to something in the $15,000-$20,000 range, while Obama has proposed capping deductions at 28%. As long as it was applied uniformly to donors to all tax-exempts, that probably passes the Lemon test, because it doesn’t single out religion.

I’ve been told that the Lemon test may not be as relevant today as it was when I was in law school. And it is not impossible that properly-designed legislation could do it. But I’d think that, at the very least, you’d want a compelling-ish reason to make the change. Given the minimal revenue it would likely raise, I think a legislature would be hard-pressed to come up with a reason beyond “We don’t like big rich churches” for making such a targeted change.

Conclusion (Such As It Is)

There’s a decent conversation to be had about tax exemption in general, and the exemption of churches in particular. But, given its complexity, reach, and constitutional issues, a two-photo panel is probably not the best way to hold that discussion. But, to the extent you enter the discussion (and, by all means, enter it!), it never hurts to define and to dig deep.

← Literary BMGD #47: While of these emblems we partake
The Shocks We Will Face After This Life →