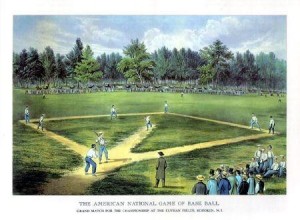 “In the 1830s, on the western frontier of Missouri, ball was the favorite sport of Joseph Smith, founder of a new religious sect called the Mormons1.”

A couple of years ago I received as a Christmas present the Baseball documentary by Ken Burns, the PBS series that as much as anything has driven my current fascination with the game and led to the Mormon Baseball blog. Early in the first of the documentary’s 10 parts, the narrator makes the above claim, something that even today I don’t hear from Mormon historians. Could it be that Joseph Smith played and loved baseball?

My first thought when I heard this line in the documentary was to wonder where the evidence was. If Joseph Smith’s favorite sport really was baseball, why don’t Mormon historians say as much? So, I started looking around for evidence.

I think it likely that the reason Mormon historians don’t talk about this is that in Joseph Smith’s day it likely wasn’t called baseball at all, but “ball,” which today we might find ambiguous because when we go out to play “ball” we could mean not only baseball, but football or basketball or just catch or even, perhaps, keep-away. So when records of Joseph Smith’s activities mention “ball,” most of us today don’t automatically think baseball. Assuming that Joseph wasn’t playing baseball, Mormon historians instead have focused on Joseph Smith’s other sporting activities, especially wrestling and pulling sticks.

The traditional story of the origin of baseball may have led Mormon historians to dismiss the possibility. The story of the origin of baseball traditionally told claimed that the game had been invented by Abner Doubleday in Cooperstown, New York in 1839, and spread to New York City, where the first codified rules were recorded in 1845, a year after Joseph Smith’s death. Under that story, Joseph playing baseball would be all but impossible.

But that traditional story is not accurate, it was an invention in the early 20th century. Instead, Baseball gradually developed from Early English bat and ball games like Cricket and Rounders. It was played in North America since at least the 1790s, and several local variants developed prior to baseball, including town ball, which featured a square field and the ability to throw out runners by hitting them with a thrown ball (ouch!). It is likely that Joseph played one of the variants of the game.

So what is the evidence in favor of Burns’ claim in the baseball documentary? I don’t know what he and his researchers found, but I have myself found several pieces of evidence.

First there are those who talk of Joseph playing ball:

The problem with these memories is that they are not specific enough for a claim that Joseph played baseball itself. While the fact that baseball was called “ball” at that time hints at this possibility, these statements could be speaking generically. Fortunately, there is better evidence.

First, there is the recollection of Mosiah L. Hancock:

“This summer (1841) I played my first game of ball with the Prophet. We took turns knocking and chasing the ball, and when the game was over the Prophet said, ‘Brethren, hitch up your teams,’ which we did, and we all drove to the woods [to gather firewood for the poor]5.”

Next, there is an account by Jane Parish Lindsay, who remembers he brother playing ball with the prophet:

“In about the year 1841 we moved to the beautiful city of Nauvoo. There we made our home not far from the Temple for father and my brother Joel worked on the Temple,and Joseph Smith and Joel being together so much. …

I have seen Joseph and Joel play ball together. Saw them go out back of the barn and throw the ball against the wall and catch it for practice.… 6“

Again, not quite clear from today’s viewpoint, but practicing catching the ball sounds like they were expecting fly balls. And since other games involving catching balls hadn’t reached North America yet, it sounds like a form of baseball.

And finally, Aroet Hale gives what is perhaps the clearest description of the Prophet playing baseball:

“The Prophet … frequently used to come out of the Mansion [House] and play ball with us boys, his son Joseph being near my age. [The Prophet] Joseph would always conform to the rules. He would catch till it came his turn to take the club, then, being a very stout [strong] man, would knock the ball so far that we used to holler to the boy that was going for the ball to take his dinner. This used to make the Prophet laugh. Joseph was always good natured and full of fun.”7

Here we have the prophet catching (I don’t know if this is actually playing catcher like we know today, or if it is a reference to fielding) and batting–hitting the ball a country mile, from what it sounds like. If this isn’t baseball or one of its variants, I don’t know what it is!

Perhaps skeptics will see a way to see this as something else–not baseball at all. The biggest problem with this evidence is that it is largely written 40 or 50 years after the fact. The subsequent popularity of baseball may have influenced the recollections of those here. Perhaps there is more that I don’t know about, references that are clearer and more timely. If you find them, I’d love to know what the references are.

So, does this make “ball” Joseph’s favorite sport? Clearly he enjoyed it, but for me ‘favorite’ would require a bit more evidence — such as an indication that Joseph chose to play baseball instead of something else, or an expression that baseball was his favorite. Without knowing what Burns’ evidence is, I can’t say for sure, but it looks like the documentary goes a bit too far in this case.

But I think the bulk of the evidence does indicate that the Prophet did play baseball, and enjoyed it a lot. The History of the Church, which is largely compiled from contemporary documents, does have multiple entries for Joseph “playing ball” with “the Brethren” and with children, perhaps even more than any other physical activity. Yes, I must conclude, Joseph Smith played, and liked playing, baseball.

There is one additional piece of information that I should probably mention—baseball was known among other Mormons as well. In fact, a Mormon group seems to have been the first to play baseball in California (as far as is known), less than 5 years after the martyrdom. But what group and how that happened will have to wait for another post.

[Cross posted from Joseph Smith and Baseball: The Evidence on Mormon Baseball. Comments can be made there.]

← Still Outside
The God Who Weeps: Darwin →