Two years ago, we spent one of my favorite Christmases ever in Italy. We were living in a little town nestled against a mountainside between the Ligurian and Maritime Alps. 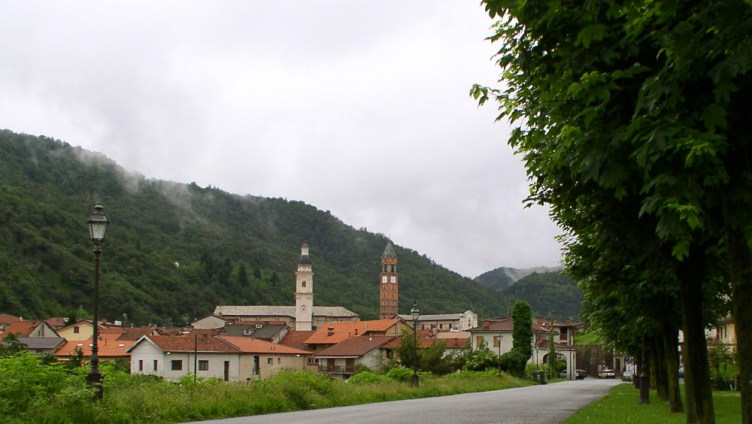 Every Sunday we drove a half hour through the Piedmont countryside to meet with our little LDS branch. I loved our branch to death, but it was in that awkward in-between stage where there are enough members to necessitate a full complement of auxiliaries, but not nearly enough to comfortably staff said auxiliaries. We generally kept things more-or-less together, but we didn’t have a lot of extra time or resources after barely managing to accomplish the essentials.

Since I was the branch music chairperson, I had realized a few months before that I should probably plan a special musical number or two for the Sacrament meeting the week before Christmas. My husband was in the branch presidency, so I asked him what Presidente had in mind. He laughed and responded that he was sure Presidente didn’t have anything in mind yet, and why didn’t I put something together and present it for his approval. Not only was our branch tiny, but we didn’t even have a choir, so I went online and got the simplest Christmas Sacrament Meeting Program I could find. It was just excerpts from the Christmas story in Luke interspersed with Sally DeFord hymn arrangements that I could download and print for free. I wouldn’t have to translate anything into Italian, and the only thing hard about the music was the piano accompaniment, which I could do myself. We were set for a stress-free Christmas program. Except that I was living in Italy.

When Presidente saw the program, he approved it on the spot, as I expected. But he also did something I did not expect. He said that instead of doing it for Sacrament Meeting on Sunday, he wanted it performed the Saturday before. That way it could serve as the branch Christmas party too, since nobody had planned one yet. My heart sank a little, but it still seemed like everything could be fairly simple.

Unfortunately, I was also in the Relief Society presidency. I went to our presidency meeting that month and mentioned the musical Christmas party. The rest of the presidency were delighted, and immediately shelved the rest of the meeting agenda and began contemplating grandiose and complicated additions. At its height, the uncontrollably ballooning activity included a gallery of local painters and woodcrafters, a Christmas play with live animals and elaborate sets painted by a professional artist, a creche display, a dramatization of A Christmas Carol, a photography contest, and an appearance by Babbo Natale (Santa Claus), bearing chocolate-covered hazelnuts, regular chocolate, handmade gifts, and various other food and non-food items. There was much debate over whether the part of baby Jesus should be played by the Primary president’s four-month-old or the premature baby who had been born the week before. I voted strongly for a doll.

During the three previous Christmases, we’d lived in San Diego, and every year I had participated in dramatic and ambitious Stake Christmas programs involving things like huge choirs, half an orchestra, African drums, a dozen young women dancing through the audience in elaborate homemade costumes, cultural halls filled with homemade treats and educational displays from dozens of different countries, and performances in front of the Temple. I looked back fondly on those Christmas programs, but it was obvious to me, at least, that our little Italian branch was in a very different situation from that huge, affluent southern California stake. Most people had multiple callings, and we were lucky if even the really essential things like Sunday school lessons and important meetings ended up happening on any given week. The economic times had hit nearly everyone so hard that they were working extra hours and spending a lot of time stressed over money matters, especially during the holidays. I knew that none of us had the time, resources, or emotional energy to carry out even a fraction of all the beautiful but impractical ideas that were flowing so freely in our presidency meeting.

Luckily, I had spent a little time with Italians, and I knew that they love to talk effusively, but all the talk doesn’t necessarily have to come to fruition for them to be happy. Eventually, I managed to pare the program down to the photography contest (which had already been more-or-less planned and frequently announced by the previous Relief Society presidency, and was otherwise going to need to be–heaven forbid–a separate Christmas activity) plus my original Christmas program, with the addition of a living nativity done by the primary children (sans live animals, although a manger with real hay was insisted upon). Everyone assumed I was in charge, since I had provided the original idea, so I was determined to make sure it was something that actually sounded doable to me. Being the rain-on-the-party American, I was already contemplating the practical underpinnings of the plan, and considering how it could be accomplished in real life.

By the time the day of the party dawned, I had invited two non-member friends, but in the end I don’t know that it was such a bad thing that neither one showed up. Although most of the branch was present and the children were running around in sheets and bathrobes in the hallway for the half hour before it was supposed to start, nobody seemed in much of a hurry to sit down in the chairs we had set up. The branch President had emailed Tony a few hours before it started, saying he had to work and would not be able to attend. That left Tony in charge of directing, except that he couldn’t very well start the meeting when everyone was out in the hall chatting and bustling.

Twenty minutes after the time to start had passed, I finally decided I had to take matters into my own hands, or we were never getting to bed that night. I sent Tony out in the hall to round everyone up and tell them it was time to start. I sat down myself at the piano and started playing some soft Christmas music with lots of hard-to-hear flourishes in the upper register, which magically did reduce the noise level. After ten minutes of playing and waiting, I knew something must have happened to Tony, so I was forced to leave the piano and go in search of him, utterly negating the progress I’d made toward achieving some semblance of quiet in the room. He informed me that someone had just rushed out the front door to find someone else, and admonished him not to start without her. We were now over a half hour past the starting time, and I said we should start anyway. Tony gave up and agreed with relief.

We finally managed to get everyone seated, including the costumed primary children. After that, everything proceeded without a hitch. Well, mostly. The first musical number, a piano solo, still hadn’t shown up. Luckily, I had one up my sleeve just in case, and I played it myself. In fact, I was so nervous I began playing it before the narrator (who had been roped into also directing the meeting) had time to introduce the program. Tony came up behind me and whispered my mistake, so I turned it into a little prelude, and continued the number after the narrator had finished his introduction. The narrator must have been nervous too, because he promptly began reading his narration during my piano solo. Tony went up behind and whispered to him too. He ended up reading a couple of passages twice, but it all came out right in the end.

The primary children were supposed to be sent up in groups between musical numbers (first Mary and Joseph, then the shepherds, etc.), but a few minutes into the program, the nursery leader panicked and started sending them all up at once. Tony rushed to the back of the room to stem the flow of primary children, so that only half of the angels came out early. 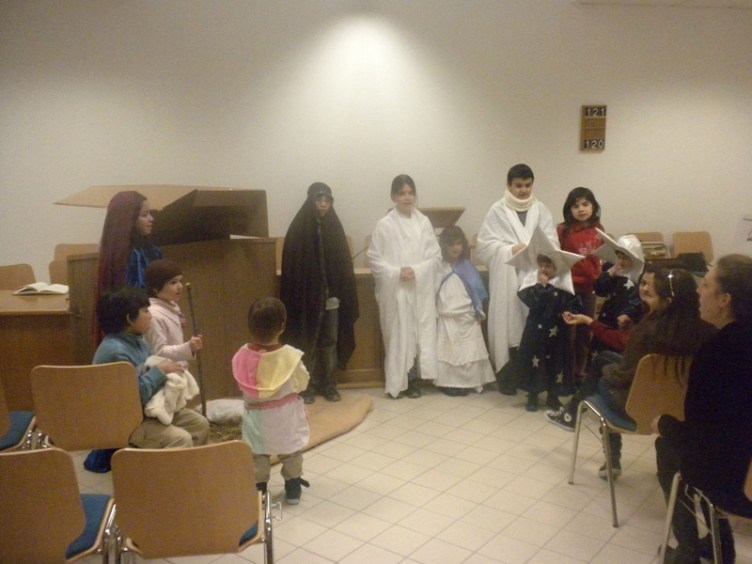 In all the excitement, I had completely forgotten to inform the missionary who was leading the congregational singing that there was supposed to be a congregational hymn in the middle of the program. So after the primary president and I finished our violin/piano duet, I sent her to find him and tell him what the hymn was. I neglected to mention the Elder’s name, and of course she found the wrong missionary, who didn’t know how to conduct, but bewilderedly came up to the front, thinking it must be time for the men’s trio of Silent Night that he was supposed to participate in.

After he had been sent back to his seat and Tony had whispered to the narrator to announce the congregational hymn, the other missionary did eventually make it up to the front to lead the singing. Having gotten all their energy out before the program, the primary children were good as gold, and stood quietly at the front during the whole thing.

There had been some confusion about the three kings, since two of them ended up being out of town at the last minute. The kings were supposed to sing the Silent Night trio at the end. But somehow the two missionaries got asked to sing, while the young men (we only have two in the branch) were dressed up as kings in African and Moroccan attire, so we ended up with all of them. That wasn’t so bad, since none of them had much time to practice the singing, and as one of the missionaries pointed out, the Bible doesn’t actually specify a number of wise men. Either way, Tony (bless his heart forever!) made up the third of both groups of kings, in a pink crown with matching cape and purple and pink tunic, accented by a large heart-shaped pink jeweled clasp, all donated by Axa. 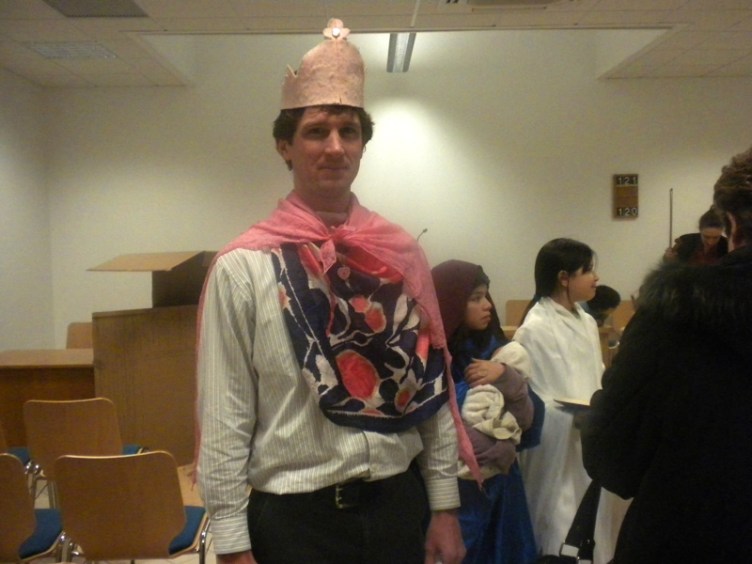 Only a minor amount of hay was spilled from the manger, and somebody besides me brought several loaves of panettone by way of refreshments, and somebody else found a lot of orange drink and soda pop in the refrigerator left over from the last activity, so in the end it actually turned out to be quite a success. At least when we consider the purpose for which it was intended, which was to help us all feel closer together and think about the reason for Christmas. The Relief Society president summed it up perfectly. She said it was like a Christmas Eve play done in famiglia: simple, but beautiful because of its simplicity.

Looking back on the elaborate Christmas programs in which I had participated during previous years, I couldn’t help feeling that mine was as far from their grand scale and artistry as humanity from Divinity. But isn’t that what Christmas is all about? The miracle of God condescending to not just come down among us, but be one of us, and in doing so, to lift us all back to Him.

Somehow, for me, even in all the chaos and unintended comedy, there was something transcendent about our little Christmas program. Many times during the weeks and hours leading up to it, I wondered why I had ever entertained this idea in the first place. But as I watched the branch, celebrating Christmas together like a family, I felt that my neurotic, inept efforts had been both accepted and magnified. Truly, angels were all around (even if some of them were running through the halls dressed in sheets), and perhaps a bit like that first humble Christmas, heaven was near.

2 comments for “The Best Christmas Pageant Ever”