My definition of the term is non-standard, but I believe it both fits as the antithesis of epistemic humility and matches our intuition that there’s something to extremism that is more than merely being far removed from the mainstream. After all, if you live in a society where child sacrifice is the norm and you consider it an abomination you are an extremist in a technical sense, but that lacks the pejorative connotations that we typically bundle in with the term.

People believe things for a lot of reasons, but the very last reason is that they have gone through some kind of rational evaluation of the evidence and logic and concluded that the belief in question is likely to be true. It is my experience that, almost without exception, our explanation of our positions (political, religious, aesthetic, etc.) are not explanations, but post hoc rationalizations.

I initially came to this conclusion as an undergraduate philosophy major (and promptly switched my major to math), but the really exciting work is coming out of behavioral economics where, as Bryan Caplan argues in The Myth of the Rational Voter, people are understood to have preferences over beliefs. Simply put, this means that we would like for some things to be true rather than others. For example, we would generally like to believe nice things about ourselves. I think that probably the most important, pervasive, and powerful source of preferences over beliefs has to do with our desire to maintain social bonds, however. We use beliefs as a way to signal our in-status to our peers.

Along with this desire to believe certain things, however, there is also a desire to be right. In “Paying for Confidence: An Experimental Study of Preferences over Beliefs”, researchers demonstrated that people are willing to pay for non-instrumental information that will increase their probability of being right without actually influencing their decision. They explain the setup this way:

Would you prefer to make a decision that has a 90% chance of being correct rather than a 60% chance? Certainly most people would say yes. If this is so, would you be willing to pay for information that might raise your prior belief from 0:60 to 0:90? While this information is non-instrumental to your decision – you would be making the same decision under both posteriors – it might make you feel better about your decision.

Experiments verified that people will indeed pay for this information, and that “a person would pay for such information because he values having a high posterior at the time of making a decision, or put differently, ‘he wants to feel confident in his decision’.” Taken in conjunction, the combination of preferences over beliefs and a willingness to pay for non-instrumental information tell a simple story: we seek to feel certain rather than to be correct.

I believe that is the essence of epistemic pride, the antithesis of epistemic humility, and the true root of extremism. It is also, in a very real sense, a counterfeit salvation. After all, don’t we believe that the kind of rest we find in the next world is not a lack of work, but a freedom from the hard slog of fighting temptation? Well, this false certainty offers a reasonable facsimile of freedom from temptation but leaves us plenty of opportunity to be anxiously engaged in “good” works.

To give in to extremism, by which I mean to adopt epistemic closure around our irrationally chosen beliefs, is to “call evil good, and good evil” and to “put darkness for light, and light for darkness” (as Isaiah would say) or to “exchange a walk on part in the war for a lead role in a cage” (as Roger Waters would say).

So how might this play out in the real world? First, you adopt a position, probably not just one belief but rather an entire bundle of related political and aesthetic viewpoints. Congrats: you have found your imitation Zion with its counterfeit unity. The next step, having found your solace, is to protect it by creating defenses around your certainty in your beliefs. How might that be accomplished? Well, you want to find evidence that supports your belief and avoid evidence that might question it. With social networking, partisan news outlets, and some judicious application of RSS subscriptions it is easy enough to get a good start on that, but the primary risk comes from those outside your chosen sphere. Especially the smart, reasonable ones. If you engage with them in dialogue, 2-way communication, your beliefs will be horrifically exposed to new information or critique, and so the most effective way to insulate your beliefs is to refuse to listen to them. This is usually accomplished by taking it as axiomatic that they are all stupid / evil, although more subtle renditions generally include the idea that anyone who appears to be smart and reasonable is an illegitimate anomaly who can be filed away as an irrelevant exception.

So far so good, but trying to maintain a positive belief that millions of your fellow citizens are some combination of horribly ignorant and malignant requires maintenance. Luckily, you find that your opponents can actually serve your needs here. The trick is to find the most easily rebutted of them, take their views, and then deride them with your friends. It’s very important that this be a group bonding activity since, after all, that was the starting point for the whole exercise. By cherry picking bad arguments you not only maintain your assumption that the other guys are all dumb jerks, but you also inoculate yourself to their alternative viewpoints in precisely the same way a vaccination works in the real life. And of course it is easy to justify this by claiming that the most vile examples of your opponents are those which cry out most desperately for some kind of redress. After all: someone on the internet is wrong. 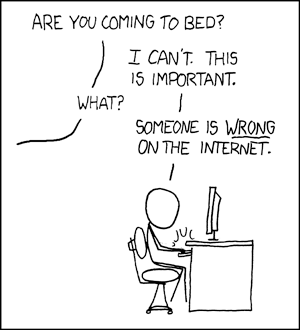 I trust the pattern I’ve outlined is familiar. If it isn’t: check your Facebook news feed.

I’ve already highlighted the fact that this entire pattern of behaviors is patterned quite closely as a cheap knock off of the genuine quest for Zion and salvation. Here is something else interesting to note: the extremists on either side of an issue (take your pick) give the appearance of fighting (based on the words) but are in fact cooperating (based on their actions). “Cooperate” might be too dignified a word. Perhaps terms like “enabling” and “co-dependent” are more appropriate, but the key fact is that the extremists are feeding off of and supporting each other in a perpetual feedback loop of outrage.

So this is where I will tie back into the idea of the two churches from my second post and cite one of the insights from my third post: the priority once again of deed over word. I will do this by first bringing in Hugh Nibley again, however, once more from “The Prophetic Book of Mormon”.

At the center of ancient American studies today lies that overriding question, “Why did the major civilizations collapse so suddenly, so completely, and so mysteriously?” The answer… is that society as a whole suffered a process of polarization into two separate and opposing ways of life… The polarizing syndrome is a habit of thought and action that operates at all levels, from family feuds like Lehi’s to the battle of galaxies. It is the pervasive polarization described in the Book of Mormon and sources from other cultures which I wish now to discuss briefly, ever bearing in mind that the Book of Mormon account is addressed to future generations, not to “harrow up their souls,” but to tell them how to get out of the type of dire impasse which it describes.

What Nibley observed about the polarity described in the final days of the conflict between the Nephites and the Lamanites was that it was a false polarity. With their words they drew passionate distinctions, but in their actions they closely mimicked each other. At every point in their downward spiral they mirrored each other and strengthened each other’s resolve, each taking turns outraging and offending the other. It is true that a single aggressor is enough to create the necessity of defensive action, but that’s not what is depicted as an endless cycle of revenge required ever more massive commitment from either side leading to a culmination at Cumorah, a culmination that was arranged by the two parties. Mormon sends a letter to the Lamanite king, the king agrees, and so they march off to the appointed place at the appointed time to finish together the terrible, awful dance they had begun so long ago. The war had been lost long, long before Mormon arrayed his surviving people for their final  battle.

So what does the real polarity look like? I suggest the example of the two churches. The extremists are struggling with rather than against each other. They are unified in their dedication to sowing contention, which comes from the devil. Thus: the Church of the Devil.

The other group does not struggle against the extremists, for to combat them is to become them. Nibley calls this “broken symmetry” out explicitly when he cites Moroni 7:11-13:

The devil fights against God, but God–although in opposition–does not join with the devil even in combat. Just as in Nephi’s vision the Church of the Devil fights against the Church of the Lamb of God, but nowhere does the Church of the Lamb of God retaliate or seek or revenge. I’m going to wrap this piece up now because there are too many questions to address without making this post overly long. Instead, I’ll outline some of the questions that I’ll cover in the next piece (which may or may not be the last of my guest-stint, I”m  not sure if I’ve got one or two left in me).

1. What are real-world examples of this extremism?
2. If you think you’re not an extremist, doesn’t that mean that you probably are, via epistemic pride?
3. How does one oppose extremism without opposing extremists?
4. Given that the non-extremists can be drawn from across the spectrum of the beliefs and the extremists at least have some unity of belief, how can non-extremists work towards unity?

Thanks again for all the great comments, and I’m looking forward to finishing off this series of posts.

← What the Smith Boys Said
Can Books Cause Problems? Reflections on Brigham Young: Pioneer Prophet →

14 comments for “The Opposite of Epistemic Humility”