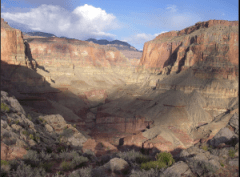 No one sets out on a path with the intent to fail.

In late 2009 I took the last major hike with my father before he died.  We decided to do the Tapeats Creek/Deer Creek loop, a trail in the Grand Canyon that we had done several times over the years, and is considered by many to be not only the most difficult hike in the Grand Canyon, but among the hardest hikes in North America.

The trail is not easy.  Just a few weeks before our trip, an experienced hiker in good physical condition attempted to hike the trail alone.  He became lost and for some unknown reason began to navigate his way down a large cliff.  After descending a ways he realized he could go no farther down, and lacked the strength to climb back up.  Stranded on a ledge, he soon died from exposure to heat and dehydration.

It was my 5th time on the trail, and my dad has hiked that trail countless times before.  We had a large group with us.  Experienced hikers from New England, Denmark, Sweden, California, Nevada, and Phoenix.   Because of schedules, my father started early with one group, and I came later in the day with a few other hikers.

Even with my experience both hiking and on that particular trail, I made a bad decision within minutes of starting the hike.  The first mile of the trail is not well marked and follows an indirect path down a cliff face.  It had been more than 10 years since my last trek on this trail.  I could see in the distance the landmarks where I knew the trail dropped  off a cliff to the deepest parts of the canyon.  Instead of following the correct trail which winds away from the landmarks, I went down a false trail that ended up wasting a valuable hour of daylight.

But that was not my first mistake, nor would it be my last.  Two days prior to the hike I was sick as a dog.  I had been battling recurring bouts of strep for a month.  However, a quick trip to urgent care and a bottle of antibiotics and I was feeling fine in time for the hike.  That is, until the first morning on the trail.  I awoke groggy and disoriented.  It took me several minutes to remember where I was or what I was doing.   I could feel the tightness in my chest that signaled a return of the infection, but ignored it.  I was the only one who knew the way, and for me to quit meant this once-in-a-lifetime experience for the other hikers would be ruined.

Two miles later it was 90 degrees and full sun.  I stopped to rest and threw up on the trail.  I tried to regroup and failed.  I threw up again and felt as though I was going to pass out.  I was out of water and the closest spring was still a mile away and 1,000 feet down an almost vertical slope of loose gravel.

If I could just make it to that water I knew the trail was clear from there.  The other hikers could easily find the main group, and I could rest in the cool shade of the spring until my strength returned.

As I lay there in that trail, too exhausted to move more than a few inches from my own vomit.  I realized that I had made such poor choices that my life was in jeopardy.  My first thought was to my wife and how angry she was going to be at me for dying.

After a few minutes, my fellow hikers came back looking for me.  They took my pack and somehow through cryptic fevered directions and several stops we made it to that spring, to the camp, and the next day, I made it to the Colorado River…the half-way point of the hike.  The bottom of the Grand Canyon.  I had completed the downhill part, now there was just the tiny problem of being more than a vertical mile below, and 12 miles away from the closest motorized vehicle.

I was so sick I could not hold an intelligent conversation.  Dizziness made every step a gamble, and on several sections of the trail ahead, I would be one misstep from 100 foot falls.  One member of our group was a doctor, a high school friend.  He counseled me to call off the hike.  I put up a weak rebuttal.  I knew I was done.  Thanks to a satellite phone from passing rafters, a few hours later a helicopter arrived, and I took the second most humiliating flight of my life with a 104 degree fever and life-threatening blood pressure of 210/140 out of the bottom of the Grand Canyon.

I failed that hike, and today I still tell that story feeling the same shame and humiliation that I felt when that helicopter lifted off the beach.  Time has not dulled that pain.

Failure and the Prophetic Narrative

Failure is a part of life that we do not often discuss.  We have all failed, indeed, even our  prophets have almost universally felt the sting of failure in their work.  So regular is the prophetic failure experience that biblical scholars have identified it as part of the shared “Prophetic Narrative” among Old Testament prophets.  The Prophetic Narrative has 5 steps:

Job’s story is probably the most dramatic of the Prophetic Narratives, and Moses’ calling in Exodus Chapter 3 is perhaps the clearest example of the Prophetic Narrative, but it is also evident in the stories of Noah (Genesis, 6), Gideon (Judges, 6), Jeremiah (Jer., 1), Ezekiel (Ezek., 2-3), and many other old testament prophets.  The Prophetic Narrative is by Peter in the New Testament when he is confronted with the gospel message, commissioned to represent Christ, and then denies Christ 3 times.  One can only imagine the sense of failure that permeated Peter’s soul when the cock crowed that dark morning.

The Prophetic Narrative is well-represented in the Book of Mormon as well:

The list could go on and on, Abinidi himself, Mormon, Moroni…  Feelings of failure appear to be part and parcel of a prophetic life.

In modern day, we know the agonizing feelings of failure Joseph Smith battled after losing the 116 pages of the Book of Mormon (Doctrine and Covenants, Section 3).  And again when we read of the feelings of frustration and failure the Prophet Joseph felt regarding the financial insolvency of the early church a problem he would never cure despite being commanded to do so by the Lord (Doctrine and Covenants, Section 119.  See also B.H. Roberts, History of the Church, Chapters 32-35).

Lastly, even Christ was destined experience feelings of failure.  In that famous passage, when Christ returns to his home town to share the gospel with those who helped raise him, in Mark Chapter 6, verse 3 we read:

3 Is not this the carpenter, the son of Mary, the brother of James, and Joses, and of Juda, and Simon? and are not his sisters here with us? And they were offended at him.

And in verses 4-5 we see Christ’s frustration and feelings of failure:

4 But Jesus said unto them, A prophet is not without honour, except in his own country, and among his own kin, and in his own house.

5 And he could there do no mighty work, save that he laid his hands upon a few sick folk, and healed them. [Emphasis added]

The reason for these examples is not to detract from the divinity of Christ, or to diminish the greatness of our holy prophets, but to show that feelings of failure, even in God’s work, is not sin.  If our prophets and our savior felt the pain of failure then feelings of failure by themselves even in a religious context cannot be sin.

All too often we treat failure as sin.  Most people feel some measure of shame from failure.  For each of us, the prospect or possibility of this shame creates a fear of failure, and as a result, our fear of failure discourages us from even attempting seemingly difficult tasks.

Nowhere is this more true than in our religious and spiritual lives.  Our fear of failure in spiritual matters paralyzes us.  To work around this fear, we seek after benchmarks, templates, and tradition so that we can tell ourselves that we have checked every box in order to claim the title of a good home or visiting teacher, a worthy priesthood holder, a loving mother, and so on.

In this context, our fear of failure in religious settings can become so great that it can hinder our spiritual progression when the opposite is true, failure leads to spiritual growth.

In each of the scriptural and modern examples I previously described, failure eventually led to stronger prophets, and more importantly, the success of God’s work.

Each time a prophet felt the sting of failure, they did not quit, but instead returned and overcame.

As previously discussed, my flight out of the Grand Canyon was the second most humiliating flight of my life.  My most humiliating flight was the airplane I flew in to return home from my mission.  There were no signs or balloons waiting for me at the gate.  There was only my mother and the bishop.  I had been in the field less than a month.  I had gone on a mission completely unprepared and unworthy.  On the last Sunday of the year almost 15 years ago now, I attended church for the first time as a failed missionary.

I was expecting to be judged, shunned, to be the pariah of the ward.  I almost wanted that to happen so that I could walk away angry and indignant.  But that did not happen.  My sisters flew in to be with me.  My family stood by my side, and the ward I had failed poured out such compassion on me that I could not deny the truth of Christ’s love.  There was not one judgment or harsh word.  I was not ignored or ostracized but embraced and welcomed home.  That day, 15 years ago, a testimony was born out of ashes of my failure in the 4th pew on the south side of the Arcadia chapel in Phoenix, Arizona.

Several months later I returned to the mission field prepared and worthy.  I served a successful mission full of the Spirit, miracles, and conversions for myself, people joining the church, and my companions.  Today, the world is a better place not just because of my failed mission, but because I overcame the fear of failing in my mission call.  Unlike my failure in the Grand Canyon, I can tell you of my most humiliating failure today without a shred of shame.

Earlier, I said that the prospect of  shame creates a fear of failure.  Going back to that point, the underlying energy for that fear and shame, as it always is, is pride.  That great and elusive sin of pride has convinced us that failure is something to fear, something to avoid and prevent at all costs.  Going forward, whenever the fear of failure rises, let us remember that the source of that fear is pride.

As we can see in all of these examples both prophetic and personal, the key to overcoming the fear of failure, and turning failure into spiritual growth is persistence, faith, and a singularity in purpose with God.

Nate practices forensic economics in Phoenix Arizona and volunteers for Exponent 2, A Thoughtful Faith, and the Mormon Transhumanist Association.  A special thanks goes out to Emily Curtis for her masterful editorial skills, as well as her expert academic input regarding the Prophetic Narrative.