My previous post centered on the special place religious institutions have historically held in human society. I argued that since religions couldn’t reliably provide public, objectively observable miracles or verify any of their claims about an afterlife, the only plausible explanation for their social capital was their ability to bridge the gap between deeply rooted human longing for meaning and the world’s absurdity.

Suppose we fix that as our definition of religion. Any belief system (with accompanying formal and informal social institutions) that attempts to aid us in our quest for meaning is a religion. The interesting thing about such a definition is that it has very little to do with what we might otherwise typically associate with religion, including God, faith, miracles, and the supernatural. According to this definition, otherwise ostensibly secular belief systems could in fact be viewed as religions. Whether or not this is a correct view hinges on definitions, but I think it’s an undoubtedly useful way of looking at the world.

In addition to The Big Bang Theory, Tyson has appeared on Stargate Atlantis. He also discovered Superman’s home planet in Action Comics #14.

Consider noted astrophysicist, committed atheist, and pop-culture icon Neil deGrasse Tyson. On the one hand when it comes to religion, he has said: “I want to put on the table, not why 85% of the members of the National Academy of Sciences reject God, I want to know why 15% of the National Academy don’t.” On the other hand, when answers Reddit AMAs (of which he has 3 of the top 10 most popular) such as “What can you tell a young man looking for motivation in life itself?” he seems to be operating outside the realm of science, strictly construed. And yet one of Dr. Tyson’s oft-repeated, non-scientific mantras “The universe is within us,” is presented as emerging from a scientific perspective. For example:

Recognize that the very molecules that make up your body, the atoms that construct the molecules, are traceable to the crucibles that were once the centers of high mass stars that exploded their chemically rich guts into the galaxy, enriching pristine gas clouds with the chemistry of life. So that we are all connected to each other biologically, to the earth chemically and to the rest of the universe atomically. That’s kinda cool! That makes me smile and I actually feel quite large at the end of that. It’s not that we are better than the universe, we are part of the universe. We are in the universe and the universe is in us.

This is a live example of what I mean when I talk about secularism as religion: it’s a statement by a scientist, grounded in scientific observation, making what is essentially a religious claim in response to an essentially religious concern (our need for a meaningful relationship to the world around us). Secularism, as a category, is of course not a religion. But most secularists are more than just non-religious. They have a particular belief system that takes philosophical positions on epistemology (empiricism) and ontology (materialism, and reductionism). They also make specific, affirmative claims on religious topics. For example, they believe that faith in God is irrational, probably unhealthy, and possibly dangerous. They also believe that  science, and science alone, should be used to answer the existential questions of life. This is a cohesive belief system, and when it attempts to shed light on the meaning of life or offer some answer to transcendental longing it’s functioning as a religion. In an attempt to find terminological clarity, I’ll denote this religion “scientism” and consider it a subset of secularism.

Is scientism a large enough movement to even be considering? I believe that it is, although I’ve done nothing more than quick back-of-the-envelope calculations. According to The Pew Forum on Religion and Public Life there are about 13 million atheists in the United States (6% of the population), so if half of them fall within scientism, that represents a larger religious denomination than Mormons. Even if only 10% fall into this category, leaving 1.3 million in the new religion of scientism, it’s worth pointing out that this is a disproportionately well-educated population. In addition, atheism is more prominent in Western Europe and is on the rise in the United States, so even a lowball estimate of the current population must still concede that it is growing rapidly. Seen as a religion, these are significant numbers.

This is about much more than labels however, and I’d like to illustrate with a few of examples. Since, from a socially functional perspective, scientism is a religion it is subject to the same pitfalls as all other religions. In fact, it’s just the most recent incarnation in an ongoing religious arms race.

At the time of Christ, the Mediterranean region was dominated essentially by local cults. Along come Christianity and Manichaeism, and the existing faith traditions simply can’t compete. Borrowing from Kuhn a bit (why shouldn’t the secular/religious confusion go both ways?), the new contenders broke the paradigm of the old. It’s not that when Paul’s successors came to down you rationally compared the truth claims of Christianity with your traditional family deity. Christianity offered you a God who created everything. Manichaeism told of an all-encompassing battle between ultimate Good and ultimate Evil in which you were invited to take part. The existing religions had not conceived of this kind of universalism, and so they had no response. Consequently, they were swept away.

Scientism represents the next advance in this arms race. What good is intangible revelation of subjective miracles when contrasted with science? Scientific findings are quantifiable, objective, and repeatable, and they lead directly to the creation of useful inventions all of us rely on every day. The validity of science is thus universally accessible, and scientism taps into that credibility to overwhelm the current generation of religions with a new round of paradigm-altering universalism. To the extent that science can be bent to make inroads into traditional religious domains (e.g. “the universe is within you”) it has a clear advantage of traditional religions. As people come to rely more and more on scientific claims and scientific experts, we’re not witnessing Western civilization abandon religion for secularism. We’re witnessing Western civilization convert from (largely) Christianity to scientism.

And, along the way, scientism faces the same subversive forces that have tended to warp religion from the authentic version to the inauthentic version. The world has never loved and will never love authentic religion because authentic religion has nothing to offer the world. It profers only the promise of fruitful toil. Authentic religion empowers us to be responsible to answer life’s existential questions for ourselves, working out our own salvation. The world wants none of this. Inauthentic religion, on the other hand, is willing to trade easy answers and false hopes for social capital. The bargain inauthentic religion offers is this: Bow down to our graven image and we will intercede on your behalf. Nevermind that it is a false and hollow intercession. The lure of worldly riches–fame, prestige, and power–is too great for religion to exist on this earth without being attacked by hijackers intent on liquidating theology, and the same is true of scientism. Authentic science is self-correcting and unbiased, but humans and their institutions are not.  The global warming debate spells the death of science, because no matter how correct the science or noble the intentions, the deployment of scientific credibility in the pursuit of political ends is a corruption from which the scientific establishment is unlikely to ever recover. One cannot divide loyalties between science and mammon any more than between God and mammon.

Originally included with this comic was the text: “You don’t use science to show that you’re right. You use science to become right.” It’s a noble sentiment that only illustrates the extent to which science is put to uses that are not strictly scientific.

That’s why battles like the current one over evolution are so fractious. I cannot take seriously the idea that Biblical literalism would exist in the form it does other than as a pretext for seeking to halt the social decline of religious institutions. I similarly cannot take seriously the idea that scientists would rigidly adhere to 19th century Darwinian evolution against even reasonable questions if it weren’t for the fact that their primary opposition was religion. This isn’t a contest of ideas. It’s a turf war. 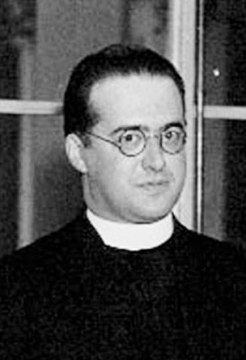 Georges Henri Joseph Édouard Lemaître was the first person to propose the theory of the expansion of the universe. He was also a Catholic priest.

It’s not the first, either. Back when the Big Bang was still a derogatory term, that was also seen as a science-v-religion grudgematch. The Big Bang, conceived by a Catholic priest, was considered such an absurdly thin veneer over “Let there be light” that it was basically a proxy for Genesis 1. As an obvious moment of creation, it implied a Creator. The secularists maintained an opposing view: the static universe model which had no beginning and therefore allowed no creator, and nevermind that it required the introduction of arbitrary positive constants into the equations (wheels within wheels). This was seen as a definitive struggle of religion-vs-science until the Big Bang was empirically validated to such a degree that the scientific establishment embraced and it simultaneously dropped their prior arguments linking it inextricably to theism.

These struggles remind me of the false polarity from Nibley’s “Prophetic Book of Mormon”, in which he pointed out that in the last days of the Book of Mormon account the feuding Nephites and Lamanites were basically mirror images of each other, just as fundamentalists Christians and the New Atheists are perfect complements. The real struggle is between the authentic attempt to answer questions reasonably and the inauthentic questions to read off someone else’s test.

This implies that two people of the same faith might actually not have much in common if one of them believes authentically and the other does not. The content of their beliefs might closely align, but their method of belief would be widely divergent. This also implies that an atheist and a theist who are both reacting to evidence they have seen with integrity could be in close harmony. It’s not what you think about God’s existence that really matters, but why you think it.

This in turn implies that maybe Mormons ought to reconsider who are ideological neighbors are. Not to shortchange the important work of bridge building to other theists, but we might be missing some valuable connections to atheists with, for example, a comparison of Joseph Smith’s radical monism and materialism.

And, last of all, if it’s possible for an atheist and a theist to see eye-to-eye (or at least pretty close), what lessons can we then apply at the individual ward level to foster unity within the diverse community of Mormons who lack any formal creeds or technical theology?

Perhaps none of the implications I’ve outline here rely entirely on redefining religion, but for me at least the redefinition helped bring them into focus. If there’s one simple message I could reduce all of this too, it would be that authentic believers can be united no matter what they believe, and those who view belief as a means to an end can never see eye-to-eye.

I will have one more piece on this series next Monday in which I’ll talk about some immediate and practical implications.

← Literary DCGD #9: The God that others worship by John Hardy
Giving Away Sins →