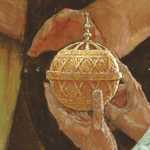 If we think of orality and literacy not as a binary opposition but as encompassing a broad spectrum of attitudes toward and uses of the spoken and written word, then we might find that Lehi and Nephi stand on opposite sides of a fundamental shift. Lehi and Nephi are both literate in the sense that they can decipher written texts, but father and son make fundamentally different uses of those texts, which affects how each of them prophesy. Although oversimplifying a great deal, one might say that prophecy for Lehi is divinely inspired speaking, while for Nephi it is divinely inspired reading.

In the Book of Mormon, Lehi interacts with three books, two of which are seen in visions. In his first vision, Lehi is given a book and asked to read it. In response, he does not scan the text and extract information. Instead, his reading involves oral vocalization in a state of spiritual illumination: “As he read, he was filled with the Spirit of the Lord. And he read, saying…” (1 Nephi 1:12-13) The next book Lehi encounters, the brass plates retrieved from Laban in Jerusalem, is quite tangible, but Lehi’s reading practices again reflect an archaic approach to the written word. Today we are accustomed to quickly find our way through scripture with the aid of its divisions into books, chapters, and verses, which vary little between different versions, translations, or editions. But not Lehi: he doesn’t know what he should expect to find on the plates, and so he starts reading them “from the beginning” (1 Nephi 5:10) The contents, moreover, are both a new discovery for Lehi, and something with which he is already familiar, because writing is for Lehi an extension of his memory. This is also how King Benjamin later describes the plates: “For it were not possible that our father, Lehi, could have remembered all these things…except it were for the help of these plates” (Mosiah 1:4). When Lehi reads the brass plates, he is reminded of things he has already read or heard. The one exception is his discovery of an extensive genealogy, the kind of information that might traditionally be transmitted orally rather than in writing in any case.

For all their tangibility, Lehi treats the brass plates as miraculous, and they inspire him to prophesy. Written records, like dreams, visions, the working of the Spirit, and the word of the Lord, all serve as inspiration for Lehi’s prophecies (1 Nephi 1:18; 8: 36; 2 Nephi 1:6). Lehi’s prophesying does not involve simply repeating the word of the Lord, but  instead comprises speech that has been inspired by an encounter with the divine, sometimes through reading. Even outside of visions and revelations, Lehi’s reading is more concerned with inspiration and imagination than with information: Lehi says that he, “according to the things which I have read, must needs suppose…” (2 Nephi 2:17). In his final discourse, Lehi appears to repeat the writings of Joseph, but it is a vision found nowhere in the biblical text. Joseph’s vision predicts the emergence of a miraculous book, and the coming forth of a great prophet who will have a spokesman to write for him (2 Nephi 3:18). Lehi’s mode of prophecy is summed up by Nephi as “see, and hear, and speak” (1 Nephi 9:1). Writing is left to someone else.

While Nephi certainly values his father’s prophecies, he has far more sophisticated tools for textual work. He abridges texts, including Lehi’s record (1 Nephi 1:17). He compares and collates texts (1 Nephi 19:2-3). When Nephi preaches, he recites and then comments on lengthy passages of scripture (1 Nephi 19:10; 1 Nephi 20-21), and draws out comparisons between scriptural texts and his present situation (1 Nephi 19:23). Nephi, like Lehi, searches the brass plates, but discovers there something that Lehi hadn’t mentioned: commandments, concrete expressions of legal and ethical principles (1 Nephi 5:21). It is Nephi’s intent that future prophets should follow his example by possessing written records (1 Nephi 19:4).

While Lehi calls himself a visionary man (1 Nephi 5:4), Laman and Lemuel use the term as an accusation against Nephi (1 Nephi 17:20). Despite Nephi’s efforts towards a rational prophecy based on reading and textual interpretation, it is only through adopting his father’s power in the spoken word that Nephi is able to command his brothers’ aid in building a ship and staying course on it to complete their journey to the Promised Land. A similar tension concerning literacy and prophecy can be seen in the Liahona, the divine compass which at first is described as having spindles that point towards the direction that Lehi’s family should journey (1 Nephi 16:9-10), and later described as transmitting texts (1 Nephi 16:26).

The transformations brought about by Greek literacy are well symbolized by the appearance of Sybil, who replaces her older sister, the Pythia, as the model of the prophetess…. She spells out the future. For the Sybil first writes her oracle on leaves, then later on tablets. She brings stone slabs to King Tarquinas, who reigned over the Campagne, south of Rome—over Etruscan towns through which the Romans got their alphabet. No one need strain anymore to hear the ominous murmurings of the Delphic Pythia. The menacing future can now be read (ABC: The Alphabetization of the Popular Mind, 13).

As much as I enjoy apologetic red meat, Lehi and Nephi’s contrasting approaches to orality and literacy do not necessarily reflect an ancient origin. More recent centuries have had their own tensions over the written and spoken word that could also be reflected in the Book of Mormon’s first two prophets. In whatever context one chooses to read the Book of Mormon, however, awareness of differing approaches towards orality and literacy makes possible a more complete understanding of the text.