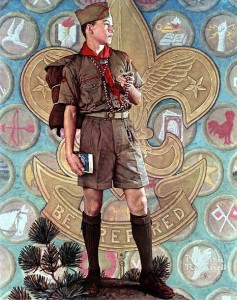 It is true that in some units more gets spent per young men than per young women. This issue is actually extremely complicated and varies from unit to unit. The complexity comes from the fact that youth spending comes from a variety of budgets at both the ward and the stake level and you need to include all sources of funding to get a clear sense of per capita budgeting. (Yes, I have got many headaches tying to figure out exactly how much got budgeted per young man or young woman in my ward and then trying to insure that the budgets are pretty much equal.) Still, in many – perhaps most – units Scouting causes more money to be spent per young man than per young woman.

Furthermore, I think that from the point of view of the Church, YW activities tend to be of higher quality than YM activity. This is because the YW program is designed from top to bottom by the Church, focusing specifically on Church goals for youth. The Scouting program, in contrast, is subject to significant input by the Church but ultimately is not structured around Church goals for youth. The result is that a lot of effort gets spent on things that are ultimately peripheral to the mission of the Church. Anyone who wants to understand this contrast should attend a Scout Jamboree and then compare that experience with a Stake Girl’s Camp. Girl’s Camp is, in my opinion, hands down a far better activity from the point of view of Mormon youth. It is far more focused on the Gospel and has far less extraneous material. It is less expensive than a Scout Jamboree, while, ironically, at the same time it represents a greater direct expenditure per youth participant. I think that the same is true of the Personal Progress Program vis-à-vis the Scouting Program. I think that the quality of Personal Progress activities from a Church point of view is higher than the quality of Scouting activities in terms of inculcating Gospel values, and it is both less expensive – no pricey uniforms, etc. – while involving more direct expenditure on youth.

There is also the issue of alienation. Some youth are inevitably going to find participation in the Church alienating. This is sad but inevitable. The Church is valuable in large part to the extent that it is counter-cultural and much of youth culture is toxic. To the extent that youth primarily identify with that toxic youth culture they will find Church activities alienating. The solution to this problem is to detach them from their primary commitment to the toxic elements of youth culture. On the other hand, some youth are going to find Church activities alienating for reasons that have nothing to do with the Gospel. I think that we ought to do everything we can do to eliminate this kind of alienation. I think that Scouting can cause such alienation, especially its paramilitary structure of ranks, uniforms, etc., none of which are directly related to the mission of the Church. Here, however, I think that we inevitably face trade offs. Much about Scouting is attractive to many young boys, and creating a program that is attractive to boys is part of what is needed in order to detach them from a toxic youth culture. It seems to me, however, that we would be better off with a YM program that provides greater flexibility. If you have a group of boys that likes camping and lighting things on fire, then have activities that harness that interest in order to teach the Gospel. But, I don’t think that there is any value in insisting on a program that generates costs unassociated to a Gospel mission. It would be nice if, for example, being a “successful” young Mormon male could be uncoupled from becoming an Eagle Scout. It is possible to be fully committed to the Gospel and the mission of the Church without being an Eagle Scout. (For the record, I am an Eagle Scout and I love camping, etc. I don’t have any particular cultural vendetta against Scouting.)

Finally, there is a the dreadful administrative headache that Scouting creates for Church units, especially Church units that have a limited pool of adult, male leadership. You have a YM President and you also have a Scout Master. You can combine the two, but then you end up running two programs that are nominally distinct but in fact united. You have multiple sets of rules and programs to comply with – Scouting and the Church. Often, the emphasis on Scouting means that the far more valuable Duty to God Program get’s ignored. And so on. As a former-YM President, a former counselor in a bishopric assigned to the youth, and the father of a scouting-age son, suffice it to say that the complexity is a nightmare. I’d much rather have a single YM program structured entirely around activities directly related to the central missions of the Church.

In many ways, Scouting is a great example of what Correlation got right. Before Correlation, essentially every program in the Church looked like Scouting. They were independent, focused on multiple goals only some of which were directly relevant to the mission of the Church, and placed considerable demands on members both in terms of time and money. Correlation, massively simplified the administrative structure of the Church, massively simplified programs, focusing them on core missions of the Church, and eliminated overhead costs, multiple, independent budgets, and a lot of excessive expenses. The young women of the Church reap the benefits of a correlated youth program, while the young men bear the costs of the only major auxiliary program of the Church to escape Correlation. Correlation rightly comes in for a great deal of criticism, primarily for the way in which it weakened female auxiliaries and “dumbed down” Church curriculum. In its defense, imagine a Church in which everything ran like Scouting and then pay close attention to the shudder that should run through your system at such a prospect.

Scouting’s survival of Correlation’s axe, I suspect, stemmed primarily for a desire to keep the Church engaged in a major, non-Mormon civic movement. Indeed, prior to the rise of the Public Affairs program of the Church in the last few decades, Scouting was essentially the only point of regular institutional contact between the Church and a large, non-Mormon institution. Aside from the nostalgia and affection of big Scouters in the upper echelons of the Church (chief of whom would be President Monson), I suspect that what keeps the Church involved with Scouting is the dependence of the BSA on the Mormons. Mormon exit from the Scouting program would be a huge financial blow to a venerable American institution, and frankly I suspect that many of the Brethren don’t want responsibility for the consequences of pulling that trigger.

Were I in charge, however, I would pull the trigger. I think we’d be better off with a youth program in which the young men got something that looked much more like the YW program.

← Literary DCGD #13: Inspired Writings
Giving Up On The Feminine Divine →

145 comments for “The Case Against Scouting”