I believe in theology as a kind of worship. To spend time and effort in the attempt to reason out the philosophical context for and implications of Mormon doctrine is an affirmation of the authenticity with which we embrace that doctrine. Intellectually wrestling with the angels is thus properly seen as an individual responsibility rather than an institutional prerogative. Theology can never take the place of other forms of worship–from music to service–but it can and should exist alongside them. 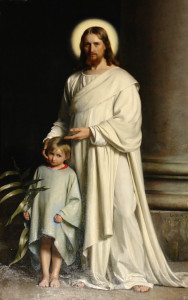 One of the important things to note about this conception of theology is that, in this as in all endeavors, we are ultimately unprofitable servants. One small disagreement I have with Adam Miller’s Rube Goldberg Machines is that I don’t believe theology to be uniquely pointless. In all that we attempt in this mortal life, we are little children in the truest sense of the phrase. Our attempt to reason out the true nature of God is no more prone to ultimate success than a four year old trying to get to the moon on a rocket ship made out of pillows, blankets, and cardboard. However, our attempts at theology are no less vital and imperative to our spiritual development than the games that children play as they seek to become like their earthly parents.

My point, in democratizing the notion of theology, is that whenever we respond to our doctrine with the question “Why?” or “How?” then we stand at the start of theology’s path. And we should step forward. “Our favorite study,” wrote Brigham Young, “is that branch which particularly belongs to the Elders of Israel—namely, theology. Every Elder should become a profound theologian—should understand this branch better than all the world.” I think that President Young was mistaken about theology belonging to the men of the Church (he probably had it backwards, if anything, as my sister Rachael Givens Johnson has argued), but the point is that it isn’t the exclusive domain of professional philosophers. We must all be theologians. How far down that path must we tread? I do not believe there is any one right answer. All I would like to say is that the amount of time we should spend in intellectually interacting with our own faith claims is strictly greater than zero.

I believe that theology is about more than individual worship, however. It can and should be a communal endeavor. I see the aggregate effect of a million individual Mormons spending small but serious amounts of time in theological endeavors as a kind of Hayekian spontaneous order. The key to ensuring that our individual efforts amount to something greater than the sum of the parts, however, is the Church as an institution.

There are at least two important roles the institutional Church plays. The first is to provide a sparse but rigid set of doctrines which are both accurate and universally held. This doctrinal skeleton may function like a coral reef, providing the common habitat for a myriad array of individual beliefs and attitudes, all sharing a common home. Of course disagreements will arise, and that’s why it is so important for theology to be practiced outside of the formal framework. Ideally everyone would understand that persuasion comes only by long-suffering, but in practice the proximity of authority weaponizes theology, engendering contention instead of worship.

The second is that the formal Church, with its endless procession of meetings and committees, it’s belligerently plain architecture, and it stubborn insistence on lumping us together in wards based on our home address, provides an absolutey vital and necessary anchor to pure religion. As the Cambridge Platonist John Smith wrote: “that which enables us to know and understand aright in the things of God, must be a living principle of holiness within us.” The sometimes frustrating chores of ordinary Church membership are fetters to bind our wandering hearts and minds, and it is for this reason (although I say this at least partially in self-condemnatino), that I think one ought never to trust a theologian who doesn’t do his or her home/visiting teaching. Without an attitude and practice of humble and practical service, a theologian has nothing useful to say.

The kind of free-wheeling, decentralized theology that I’m describing depends absolutely on the rigidly hierchical Church institution. In short: theology needs the Church.

And I think the Church also needs theology. That is a statement easily susceptible to misinterpretation because the Mormon idea of theology is so different from the conventional one. Although theology is only useful as it strives earnestly to uncover truth, the Church doesn’t need the products of theology. I am not suggesting that we reverse the top-down nature of oragnized revelation with democratically-approved theology and upturn house of order. Far from it. Rather, I’m suggesting that it’s the activity of theology that can make members individually spiritually awake and alive, and that that activity is what the Church needs. To try another phrase: the Church doesn’t need theology, but it does need theologians.

In addition to providing spiritually awake members, however, I think that theology has another role to play. One of the unexpected benefits of the Church’s missionary program is that Mormons speak foreign languages and understand foreign cultures. Our efforts to send the Gospel to all the world have created a cultural empathy that has changed who we are as a people.

One of the unexpected benefits of a bottom-up theological ecosystem would be a similar growth in the ability of Mormons to understand each other and the broader philosophical world. I know that in my own theological pursuits I have been led to explore existentialism, modern epistemology, and Zen Buddhism. I’ve learned a lot of important lessons that have made my spiritual life richer, but one of the most important lessons I learned was the general one: there is always more truth out there. Because I know that I can always learn from other individuals and traditions, I have learned an anticipatory appreciation for the traditions that I haven’t yet explored.

I believe in working towards a literal Zion, but one lessone from the historical failures of Utopian movements (including our own) may be that intellectual or spiritual monocultures are doomed. One thing that is wanted, I believe, is high tolerance for divergent views in the presence of convergent ideals. That is possible only to the extent that, as with missionaries who have learned foreign languages and cultures, amateur Mormon theologians learn for themselves an admiration of and respect for traditions foreign from their own (which will include the theologies of fellow Mormons). I think Dave Banack’s post from last week is an important example: Mormons can disagree about the King Follet Discourse and still love and appreciate each other as fellow disciples of Christ. We can learn to have unity in the presence of disagreement if there is a bedrock of shared ideals and principles. If we do, then Zion’s perfect unity need not await perfect theology. If we don’t: the idea of Zion will be relegated to unattainable symbol.

I quoted D&C 29:30-32 in my last post, and I’d like to reference it again. Nearly two centuries ago the temporal infrastructure of the Church of Jesus Christ was restored to the earth, but the spiritual creation is still underway. I feel that the pace of that growth is increasing as I see more and more Mormons looking for intellectually satisfying varieties of Mormonism that also embrace the core doctrines and historical claims of the Church. I believe and hope that the intellectual growth will be coupled with aesthetic and spiritual maturation as well, and I’d like to cite a moving piece by Mormon playwright Mahonri Stewart as an example.

I believe Mahonri makes excellent points in his piece, but the important thing is not to get the theology right. We already know we will ultimately fail at that through error or incompletion. The important thing is to sincerely try, to take risks, and in so doing to take responsibility for our own faith. It is to seek to be at once autonomous and obedient.

There is no possibility that we will actually become autonomous, nor that our participation in God’s work will improve it any more than my very young children can successfully cook or clean the house on their own. I encourage them to help anyway, even though I know it means fishing out broken eggshells. Despite our failings, we are called to participate anyway. And so we should.  And I have no doubt that God, a  truly loving father, will bless our earnest failures and tell us “Well done.”

← Literary DCGD #12: The Gathering of Zion
Genesis vs. Science: Background, Readings, and Discussion →