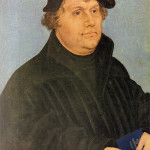 One of the paradoxes of Mormonism is the heroic status it grants Martin Luther while simultaneously rejecting all of his central teachings. Mormon teachings and the basic narrative of the Restoration in some cases even suggest that the Reformation, however necessary it may have been, was not only incorrect, but also that it was a failure.

We can start with Martin Luther’s central insight that God’s grace is given on the basis of faith alone without the need for good works or sacraments or the mediation of priests. It is probably not useful to argue that we do so believe in salvation by faith alone. We don’t. To Mormon ears, ‘works religion’ sounds more like a compliment than an accusation. For Mormons, faith is but a necessary first step towards ‘saving ordinances’ – a phrase that cannot refer to religious rites in orthodox Protestantism. From the perspective of Mormonism, libertinism and emotional excess masquerading as a religious experience are the logical consequences of emphasizing salvation by faith and diminishing the significance of good works or sacraments. By this reading, Martin Luther wanted to create true Christians but instead gave us unchurched enthusiasts: the Zwickau prophets, victorious at last.

The same might be said for Mormon and Protestant concepts of priesthood. The restoration of the priesthood through Joseph Smith is only possible by rejecting the Protestant view of a ‘priesthood of all believers.’ Luther’s treatise An den christlichen Adel deutscher Nation imagines a group of Christians trapped in the wilderness with no priests among them. Who should preach and baptize? According to Luther, they should simply select one of their number to be a priest because all Christians are already priests by virtue of their baptism. In this view, ‘priesthood’ is not something that can be lost or restored. There is no way to reconcile Luther’s definition of priesthood with what Mormons see as the principal accomplishment of Joseph Smith’s ministry. In Mormonism, an interruption in direct conferral of authority to baptize or conduct other ordinances can only be repaired by divine intervention. When the apostle Dallin H. Oaks cited Luther’s “priesthood of all believers” in General Conference, he expressly defined it as relating to prayer and personal revelation, not the authority to officiate in sacraments. The Mormon feminists I am aware of want the priesthood that was restored by Joseph Smith, not Martin Luther’s priesthood of all believers.

Even worse, from a Protestant point of view, is that the Mormon concept of priesthood makes possible things that the Reformation tried mightily to stamp out, including belief in sacred places (temples consecrated as numinous spaces for sacred ordinances), sacred objects (consecrated oil and, in scripture, the Urim and Thummim and Liahona), even sacred people (patriarchs, prophets, apostles). According to Mormon understanding, priesthood gives access to divine power (in healing the sick or pronouncing other blessings), a manipulation of the sacred that the Reformers rejected as superstitious. The God of Mormonism is not an incomprehensible dispenser of divine grace, but a sympathetic being who can be approached through specific steps. This is both a rejection of Protestant doctrine, and an insistent accusation that the Reformation failed to understand mankind’s place in the cosmos: the universe is too terrifying, life is too difficult without some psychologically reliable method to access divine aid. The Reformers, by this account, stripped the altars of things that people actually need.

Nowhere is the Mormon rejection of the Reformation more flagrant than in the doctrine of sola scriptura, the notion that the Bible provides all the truth needed for salvation. Not only has Mormonism repeatedly expanded its canon beyond the Bible, but it doesn’t even regard its expanded scriptures as definitive: at any time, the prophet can authoritatively expand, clarify, or re-interpret existing scripture. The insight of Joseph Smith was that sola scriptura had failed, that increasingly exact translations and ever wider distribution of God’s Word had not succeeded, and cannot succeed, in instilling righteous living and creating a unity of faith among Christian believers.

We shouldn’t overlook the connections between Mormonism and the American Protestant environment in which it arrived at its reimagination of Christianity, just as the Protestant Reformation reimagined Christianity in the context of late medieval Christianity. As long as Mormons and Protestants care about their core doctrines, however, I suspect that no amount of cooperation in good faith between churches will ever make possible a theological reconciliation.

← Sifting the Sacred from the Mundane
Groundwork →

39 comments for “Joseph Smith and the failure of the Reformation”