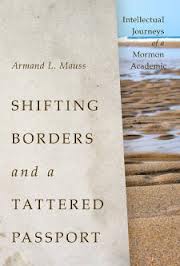 This is the second post (see first post) discussing ideas presented in the recently published memoir of retired LDS sociologist Armand Mauss, Shifting Borders and a Tattered Passport: Intellectual Journeys of a Mormon Academic (Univ. of Utah Press, 2012; publisher’s page). After taking five years away from his graduate work to serve as a counselor in a bishopric, Mauss returned to his studies in 1962 at UC Berkeley, where he quickly encountered a serious challenge to his faith.

Here is how he recounts it:


I was, of course, expecting to be exposed to new intellectual territory, especially since I was switching my disciplinary focus from history to sociology for the doctorate. … As my intellectual development continued, the sociological concept that truth or reality is socially constructed turned out to offer a greater challenge to my religious faith than anything else I was to encounter in my entire academic career. I gradually came to terms with that challenge, however, and eventually became quite comfortable with the “social constructionist” way of understanding reality. (p. 47; emphasis in original)

Mauss cited Peter Berger’s 1967 book The Social Construction of Reality as well as Berger’s 1968 book The Sacred Canopy as direct influences. Mauss described a contrast between an objective reality “existing independently of human invention, of the kind claimed in religions like Catholicism or Mormonism” and a sense of the world “which has been constructed by our families and passed along to us as part of our cultural heritage” (p. 48). How did he resolve this challenge to the traditional approach to religious belief?


Where religion was concerned, at least in my case, it became increasingly obvious that if I were to continue as an active believer in the LDS faith, it would be mainly a matter of choosing to embrace a certain construction of reality, not the result of a meticulous process of testing and proving incontrovertible claims about the supernatural. (p. 48; emphasis in original)

This sort of episode — encountering a doctrinal or historical or philosophical challenge to the Mormonism you received from parents, teachers, and the CES — seems particularly relevant in the Internet era, where such encounters are no longer limited to graduate students or academics but extend to a good portion of the general membership. The particular circumstances of Mauss’s experience (it was a slow and gradual encounter; he had served a mission and then five years in a bishopric prior to the experience; his commitment to Mormonism was deep and sincere) probably helped him work through this challenge more successfully than others. But in 2013, with Google at our fingertips, such encounters happen quickly and they happen earlier. Anyone pushed into the risky transition toward a more sophisticated approach to faith and belief should know that it simply takes some time to get there.

This idea or model — that our view of the world and how it works, including religious belief, is largely socially constructed — was not simply a personal view. It became the model that Mauss used to understand the various LDS beliefs and doctrines related to race and lineage that he finally published in 1994 as All Abraham’s Children: Changing Mormon Conceptions of Race and Lineage. Mauss explains how he gradually came to apply the model to LDS racial doctrines:


[A]s I began my research into early offical and quasi-official Mormon literature, it became obvious that a preoccupation with the divine plan for several lineages was indeed a theme that recurred with increasing frequency in that literature from the mid-1830s onward. Indeed, this preoccupation included, as part of that larger context, an increasing glorification of the Anglo-Saxon and Teutonic peoples as modern descendants of the ancient Israelite tribe of Ephraim. This retroactive construction of the Mormons themselves as a chosen lineage or “race” was the focus of my MHA presidential address in 1998. My research in LDS literature over time also revealed the changing construction by church leaders of the meaning and significance of the “Lamanite” lineage. Gradually, I was able to formulate a comprehensive and unifying theme through which to interpret the part played in Mormon history more generally by the social construction of identity around lineage and the changes in such constructions as an important dynamic in Mormon history. (p. 110-11; emphasis in original)

Interestingly, Peter Berger himself has distanced himself from the constructivist paradigm that his earlier book gave rise to, most recently expressed in In Praise of Doubt: How to Have Convictions Without Becoming a Fanatic (HarperOne, 2009). With co-author Anton Zijderveld, he writes:


In the social sciences, the term “constructivism” has gained currency as denoting a postmodern approach. There are no objective facts, only interest-driven “constructions.” The term, in all probability, was originally meant to allude to the book The Social Construction of Reality, by Peter Berger and Thomas Luckmann (1966). … Perhaps the word “construction” in the Berger/Luckmann volume was unfortunate, as it suggests a creation ex nihilo — as if one said, “There is nothing here but our constructions.” But this was not the authors’ intention; they were far too much influenced by Durkheim to subscribe to such a view. What they proposed was that all reality is subject to socially derived interpretations. What much of postmodern theory proposes is that all interpretations are equally valid — which, of course, would spell the end of any scientific approach to human history and society. And some postmodern theorists have maintained that nothing exists except or outside these interpretations — which comes close to the clinical definition of schizophrenia, a condition in which one is unable to distinguish reality from one’s fantasies. Put simply, there is a world of difference between postmodernism and any sociology of knowledge that understands itself as an empirical science. (p. 66-67)

I provide that quotation only to show that the social constructivist model remains complex and controversial, not as a rejoinder to the account given by Mauss. Plainly, a good chunk of our view of the world is socially constructed. It’s just a question of whether that socially constructed chunk comprises some of our view, most of our view, or all of our view. As Mauss recounts his own experience with the theory, what started as a challenge to his view of Mormonism became a tool for better understanding Mormon doctrinal history (as illustrated in All Abraham’s Children) and also a tool for minimizing the distress caused by unwelcome cultural aspects of Mormonism. It might be a handy concept to put in your religious toolkit.

← Established by Jesus Christ himself
Everything is a Remix, Genesis Edition: Intro →