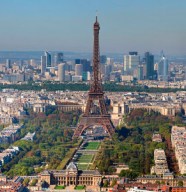 I’ve been asked to give a series of three 1-hr lectures on the Bible in French, to be held at three different LDS chapels in Paris, beginning in mid-June. (Yes, we’re currently in Paris, where man can live on bread alone. Quite happily, too.) These lectures will be open and advertised to the public, as a kind of open-door/public education thing. They’re still to be finalized and scheduled, but I’m trying to narrow down my topics, which will not be Mormon-centric.

Each lecture must be freestanding, because we’re not going to get the exact same group each time, though presumably some will attend all three. I have five general areas that need to be reduced to three, either combining, condensing, or just eliminating.
My general thought is to talk about the contextual world of the Bible and perhaps major events that shaped it, contrasting the OT and NT. I wrote elsewhere that

roughly speaking, the New Testament involves less than 100 years of history, two cultures (Greco-Roman and Israelite/Judaic), and a few languages (Greek, and to a lesser extent, Hebrew, Aramaic, and Latin). By contrast, the Old Testament covers more than 1000 years of history (not counting the deutero-canonical Apocrypha written in the 400 years between the two testaments), multiple cultural influences and languages (Egyptian, Assyrian/Babylonian, Hittite, “Canaanite”, Persian, and Greek) and nearly 3.5 times the amount of text as the New Testament.

Old Testament– I have two different ideas about approaching this. What I want to emphasize is a contextual approach, that this was not written in a vacuum nor a modern context.
The world that gave us the Hebrew Bible

Or, covering more or less the same territory, but done as more of a backwards-looking RE-discovery of the world that gave us the Old Testament.

I can go with OT, Inter, NT.
I can go OT, NT, Reading Today.
I could combine the OT/Inter/NT into one,  necessitating the cut of a lot of material, then Transmission, Reading Today.
Or, I could do something fairly different.
World of the OT
Reading the Bible Today
Then, modeling the knowledge and suggestions from the previous two, Reading Creation in its Ancient Context and talk about Genesis 1, science, and ancient context, as I’ve written about much here at T&S. This will help show how reading Genesis against a modern scientific reading is the wrong thing to be doing.
I anticipate having a projector and using slides and visuals, as well as handouts with some terminology and references.
Thoughts? Suggestions? Preferences? Questions? I assume not much of the T&S audience would be present (or French fluent), but value your input.

8 comments for “Giving lectures in Paris on “The Bible from Yesterday to Today”- Help me narrow my topics.”