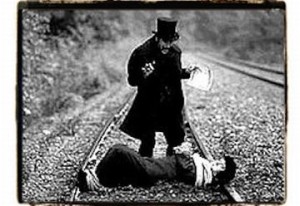 Previous installments here and here. You can read Chapter 2 of Approaching Zion here.

Another confession: I had a really hard time with this chapter. And it’s not just because I read it sitting in an airport waiting for a plane that was delayed for an hour and a half. Rather, it’s because of the way Nibley speaks of the wealthy. Certain of his descriptions feels to me, so laughably one-dimensional—so moustache-twirling, tying-the-heroine-to-the-tracks—that I find myself fighting both his prose and my instincts to not just dismiss his entire piece out of hand.[fn1]

There are exceptions, but they are dangerously rare, for wealth is a jealous mistress: she will not tolerate any competition; rulers of business are openly contemptuous of all other vocations; and all those “how-to-get-rich” books by rich men virtuously assure us that the first and foremost prerequisite for acquiring wealth is to think of nothing else—the aspirant who is guilty even of a momentary lapse in his loyalty, they tell us, does not deserve the wealth he seeks. (52)

The city I live in is filled with McCormicks and Pritzkers; if you go to a museum, if you go to the ballet or the symphony, you’ll see their names and the names of other wealthy philanthropists. These people use their wealth to be comfortable, it’s true;[fn2] they also use their wealth to support artists and public parks and other things that, at best, provide warm glow and reputational returns to them. Heck, a partner at the law firm I used to work for (not as wealthy as the McCormicks or the Pritzkers to be sure, but still wealthy) skipped several days of work every summer to attend each performance in the Lincoln Center’s Mostly Mozart series.

That is, wealth is clearly not inherently a jealous mistress, and the wealthy are not inherently contemptuous of all other vocations. By grossly exaggerating his stereotypes of things with which I have some familiarity, Nibley puts a real impediment in front of my buying his story.[fn3]

Which is a shame, because again he raises some material issues, eliding many of the details, but raising issues we need to grapple with.

The rhetoric in this chapter had a very Cold War feel to me: Babylon, he tells us, is “the exact opposite of Zion in all things” (30). In the same way that Zion is pure, Babylon is pure evil, and “Babylon and Zion cannot mix in any degree; a Zion that makes concessions is no longer Zion” (30).

I wasn’t terribly old when the Berlin Wall fell, but I did spend some formative years living in the twilight of the Cold War. And, with its two superpowers and mutually-assured destruction, the Cold War provided stability to the world. There may have been skirmishes that didn’t involve the U.S. and the USSR, but those were sidelights, not really worthy of attention on the main stage. The U.S.-USSR conflict represented a real, existential threat. And, in that context, I understand thinking of Zion and Babylon is equal, opposite enemies, enemies that cannot mix.

Today, though, we no longer live in a bipolar world, defined by two superpowers that could, at the push of a button, absolutely destroy each other. We live in a unipolar (or maybe multipolar) world. I remember, years ago, reading an article that described our world as less stable. That said, we don’t face an existential threat. Sure, terrorists can hurt a lot of people. Maybe they can hurt a lot lot of people. But the U.S. doesn’t face imminent destruction.

And, based on our belief that the Church will fill the Earth, that the Millenium will come and Satan will be bound, I’d say Zion probably doesn’t face an existential threat; incursion of Babylon into Zion can, of course, do significant damage, hurting the residents of Zion, and possibly pulling some from its safe environs. But I’m not convinced that Babylon is the equal opposite of Zion.[fn4]

Zion and Babylon cannot mix, Nibley assures us. The Zion “that makes concessions is no longer Zion” (30).

That said, those of us who live in the world can’t help but interact with Babylon (whatever that is). And, in fact, we have been encouraged to be inclusive, loving and interacting with all of our neighbors, Mormon or not, presumably of Zion or Babylon.

So, then, how to reconcile a Zion that cannot mix with Babylon with a Zion people who love our neighbors, whoever they are? If we truly practice Elder Ballard’s doctrine of inclusion, Zion cannot be a place that excludes others. Rather, it seems to me, the mixing has to be in our heads and our hearts; we cannot mix a desire for Zion with a desire for Babylon. And, maybe in this way, the Cold War vision works. It’s not that we have to separate ourselves; instead, we have to sanctify ourselves.

But there’s more: it can’t just be ourselves individually—Zion is not me, Zion is us, a city, a community.

And it’s here that I wish Nibley had moved beyond general ideas (because, though he believes in a real, tangible Zion, he sticks with generalities as he describes it) and mischaracterizations of the wealthy and the merchant class. Because here we have a real issue, one with which I’ve struggled and one with which I’ve seen others struggle. That is: what is our lodestar as we act in this world and attempt to make ourselves Zion people and people capable of building Zion?

I’ve been in lessons at Church where people—often successful, comfortable people—try to figure out how they can be charitable, Zion people, how they can live the law of consecration. Do we give to the beggar on the street? What constitutes materialism?[fn5] The discussions are generally deeply unsatisfying, often ending with an injunction to pay an honest tithe and a generous fast offering. That’s clearly not enough, but it’s an understandable conclusion to come to. The scriptures and prophets are clear about 10% + generous other contributions. But beyond that, we have limited explicit guidance.

Our inability to definitively answer these questions may be a feature, not a bug, of the world we live it. That is, finding the answer may be less important than wrestling with the question. Still, the discussions I’ve participated in are even unsatisfying in terms of the wrestling; they often seem shapeless and pro forma. Nibley condemns consumerism and conspicuous consumption but, at least thus far, he hasn’t provided a framework with which to evaluate these questions.[fn6] The best guidance I’ve seen on this point, frankly, comes from C.S. Lewis’s Mere Christianity:

I am afraid the only safe rule is to give more than we can spare. In other words,  if our expenditure on comforts, luxuries, amusements, etc. is up to the standard common among those with the same income as our own, we are probably giving away too little. If our charities do not at all pinch or hamper us, I should say they are too small. There ought to be things we should like to do and cannot do because our charities expenditure excludes them.

Even this doesn’t actually get to a solid framework, but it suggests criteria against which we can measure how we’re doing, charity-wise. And having a framework, without a definitive answer, probably is the best possible world, because then we can struggle with the question of how to be a Zion person/community in a structured (and, hopefully, fruitful) manner.

Becoming sufficiently charitable isn’t the end, of course. The selflessness and altruism that come with being truly charitable aren’t a sufficient condition to arrive at Zion, it seems to me, but they are, nonetheless, a necessary condition.

[fn1] One of my law professors put it roughly this way: I believe every word I read in the New Yorker, except when they write about something I know about. (Note that it may have been the New York Times; it’s been a while since I was in law school.)

[fn2] Or, at least, I assume it’s true; they don’t  ever invite me to their parties.

[fn3] I wonder if that’s part of the reason Approaching Zion is so arresting to young, left-leaning, thinky types: without the additional life experience that comes as we leave home, leave college, enter the workforce, and increase our social circles, they can skip over the inconsistencies and mischaracterizations of the world as it exists and instead focus on the world as Nibley believes it should be.

[fn4] Of course, Nibley’s still not entirely clear about what Zion is, so saying that Babylon is its opposite doesn’t provide a full definition of what constitutes Babylon, either.

[fn5] (I ask as I sit at a nice computer, with my nice tablet computer by me and my nice smartphone charging behind me.)

[fn6] Maybe I’m just being dense, and his framework is to give up anything beyond necessities, but I don’t think that’s it.

Note: Because of my work schedule, I’m unlikely to get an AZP post up next week. I hope to get back to them, with Chapter 3, the following week.

← Why I’m glad Heavenly Mother is as yet uncorrelated
Literary DCGD #20: From The Arcana of the Infinite →

98 comments for “The Approaching Zion Project: What is Zion? A Distant View”