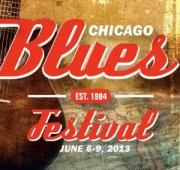 I could see them before I crossed Michigan Avenue into Grant Park. There were probably five of them, holding big yellow signs with blocky letters, Bible verses. It seemed out of place, fifty feet in front of the entrance to the Chicago Blues Festival,[fn1] but maybe I just didn’t understand the logic behind it. I don’t remember the verses the signs promoted, and the picketers seemed nice enough, holding signs but not harassing the passersby, passersby who, like me, basically ignored them. Maybe they’d picked out verses of scripture with special applicability to fans of the blues; then again, maybe these were just generic holy protest signs.

Closer to the entrance, east of the freelance blues guitarist playing outside the gate, was a street preacher I’d seen before. Dressed in his grey suit, holding a microphone connected to a little 25-watt guitar amp, the preacher usually stood a mile and a half further north, preaching at tourists and businesspeople on the Magnificent Mile stretch of Michigan Avenue. He was preaching an amplified message to the passing crowd, a message I didn’t catch for the podcast in my ears and the anticipation of electric blues in the park.

And the blues were spectacular. For the better part of two hours, I stood on the blocked-off Columbus Drive, listening to Eddie Shaw and the Wolfgang, along with some guests, pay tribute to Howlin’ Wolf. Saxophone, guitar (including a three-necked guitar!), bass, drums, Hammond B3. Surrounded by people, old enough to sit in lawn chairs and young enough to have green hair, black and white, drunk and slightly-less drunk.[fn2] A mother nursed her baby sitting on the curb. The evening was beautiful, cool enough that I didn’t burn up in my jeans, but warm enough that I didn’t need my fleece.

On the way out, the signs were gone and most of the not-in-the-festival bands were gone. But the preacher was still there. As I passed him, his words drifted past my headphones.

“You’re going to hell because you’re a ho-mo-se-xual.”

He emphasized every syllable of homosexual.

At home, I started to prepare for Sunday’s primary lesson. The Holy Ghost Helps Us Know the Truth. Central to the lesson is the story of Abinadi. And I recognized Abinadi’s preaching.

Wo be unto this people, for I have seen their abominations, and their wickedness, and their whoredoms; and except they repent I will visit them in mine anger.

And it shall come to pass that they shall know that I am the Lord their God, and am a jealous God, visiting the iniquities of my people.

And it shall come to pass that except this people repent and turn unto the Lord their God, they shall be brought into bondage; and none shall deliver them, except it be the Lord the Almighty God.

Yea, and it shall come to pass that when they shall cry unto me I will be slow to hear their cries; yea, and I will suffer them that they be smitten by their enemies.

And except they repent in sackcloth and ashes, and cry mightily to the Lord their God, I will not hear their prayers, neither will I deliver them out of their afflictions; and thus saith the Lord, and thus hath he commanded me.

[fn1] One of these days, if I ever get around to it, I’m going to write a why-Mormons-love-big-cities post. And near the top of my list will be festivals. Saturday morning, we went to see Justin Roberts at the Printers Row Lit Fest. Because of soccer and soccer and gymnastics, we unfortunately missed the delicious Ribfest, though we hit all three last year. And Saturday was only the beginning of Chicago summer festival circuit.

← Zion Theatre Company’s Kickstarter Campaign
Get with the program →