Some folks enjoy poking a hornet’s nest, but just writing that title has me quoting Shakespeare in my head: “Once more into the breach, dear friends, once more.”

I’m going to go ahead, however, because even though I may be about as welcome in most feminist circles as Feminists for Life (or as my friends at Secular Pro-Life when they showed up at the American Atheist Convention) the reality is that as long as women face staggering rates of sexual assault and systematic discrimination–things I’ve witnessed second hand through friends and family–I will consider myself a feminist. So tough luck all around; it looks like we’re stuck with each other.

The most recent modesty/feminism Internet brouhaha was kicked off by former Power Ranger and current swimwear designer Jessica Rey. In a video for Q (apparently the Christian equivalent of TED), Rey cited a Princeton study to argue that bikinis disempower women via objectification. The video was applauded by religious social conservatives, but quickly drew fire from religious social liberals like To Everyone That Believeth (Mormon) and Liz Boltz Ranfeld (Commonway Church) who approve of modesty (in theory), but not of Rey. The main argument from Rey’s critics is straightforward: you can’t ask women not to wear a bikini just to protect men’s fragile sexual equilibria. First of all: because it doesn’t really have any impact. Haters gonna hate, and sexual objectifiers gonna objectify, seems to be the slogan. Secondly: because women should be modest for their own sake and not because men may or may not sexually objectify them. So Ranfeld writes: “Objectification is never the fault of the person being objectified. I cannot turn myself into an object. I cannot use myself as an object. Only someone else can do that to me, and those actions are up to them, not me,” and To Everyone That Believeth chimes in: “[I]t is not the responsibility of women to manage men’s sexual desires.  Full stop.  It is not women’s job.”

This isn’t just theory, as Heldman goes on to list a dismaying catalog of the psychological toll wrought by self-objectification: depression, sexual dysfunction, eating disorders, and depressed cognitive function are just a few. The most shocking example, to me, was habitual body-monitoring. According to Heldman, the average woman engages in body-monitoring (i.e. checking how her body looks to others) about every 30 seconds. 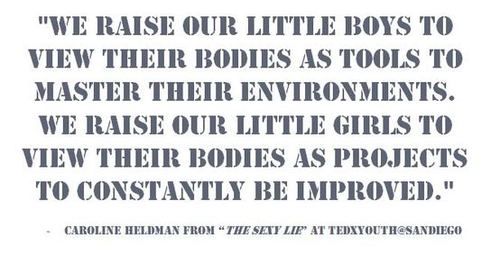 In other words: concerns about sexual objectification need not necessarily be concerns about men, but rather about the subject/object dichotomy that places men as sexual subjects and women as sexual objects even to women. Is wearing a bikini participating in that culture? Probably so, but what matters more is the principle that Heldman illustrates. Whatever the standard of modesty for a society is, by choosing to follow it women are rebelling against a culture of sexual objectification that would seek to co-opt their own self-expression and turn them into objects. In short: a women-centric view of modesty.

Religious feminists often state that modesty is something women should do for themselves, but they less frequently explain why. What’s in it for women? Without a specific articulation of modesty as modesty the seeming defenses often boil down to a much different and fundamentally libertarian argument that people should be free to wear what they want (modest or not). I don’t have a problem with that position, but let’s not confuse a defense of freedom of expression for a defense of modesty.

So far so good, but I’m not done. I would also like to discuss the excessively vitriolic way in which the mere idea that women would dress for men’s benefit is repudiated. What, fundamentally, is wrong with this notion?

I think a lot of the anger comes from the fact that, in current American society, gender expectations for men are few and far between relative to the intimidating array of judgments, standards, and expectations for women. The Art of Manliness can seriously talk about “reclaiming the lost art of manliness” (emphasis mine), and we have the mommy wars but no daddy wars. This inequality is unfair, but I think we shouldn’t be too hasty to solve it by tearing down all gender expectations. Rather than by lowering the high standard, an alternative redress to double standards is to raise the low standard. 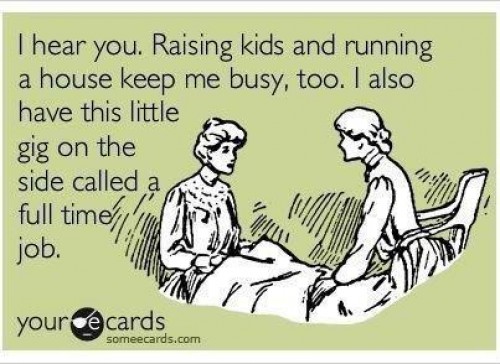 Just one example of the Mommy Wars. As a man, I just don’t have to deal with this kind of judgment. Which is nice for me, because I find it terrifying.

In addition, I just like the idea of gender roles as an expression of John Donne’s “no man is an island.” Reading works by David Brooks and Colonel Dave Grossman has impressed upon me the degree to which humans are social animals. Not in the superficial sense of happening to organized ourselves in groups, but in the much deeper ontological sense of defining our selves in a context of relationships with other selves. And not just cost-free spontaneous associations freely entered into or exited from, but roles, duties, and obligations that have a durability outside whim and preference. I share the drive for equality, but the almost Ayn Randian approach of insisting that all notions of obligation between the genders be severed or reduced to ad hoc consensual contracts seems counter-productive and even anti-social.

So what might we have as some increased gender expectations from men? Well, if women should dress modestly first and foremost for themselves (which I believe), and dressing modestly is also a nice thing to do for men, then men ought to keep their own minds pure by (for example) abstaining from pornography first and foremost for their themselves, but also as an important element in refusing to participate on the demand-side of sexual objectification culture. Along these lines, men have a broader obligation to accept responsibility for their own mental lives. While it’s true that women can influence men’s thoughts with their dress, whining about it is not a valid response. Men should understand that they are not entitled to expect women to dress a certain way, and must take their environment as it is and learn to deal with it. This doesn’t seem like a special skill, because it’s how we instinctively think about virtually every other question of interpersonal morality. Example: it’s obviously easier to be kind to nice people, but ultimately our impatience or anger are our problem. We don’t need to deny that women’s modesty can influence men’s thoughts to apply the lesson we generally learn as toddlers: that blaming our bad behavior on provocation does not fly.

For me, the important principle is complementarity. There’s nothing intrinsically wrong with women dressing modestly for men as long as it is secondary to their own interests and as long as it happens in a cooperative context in which men are expected to be altering their behavior in complementary ways for women.

← “Rediscovering the World of the Old Testament”- A Report
Same Old Thing or A New Vision for Missionary Work? →

39 comments for “Reconciling Modesty with Feminism”