As noted a few weeks ago, I gave my first of three lectures last night, on the Rediscovery of the World of the Old Testament. 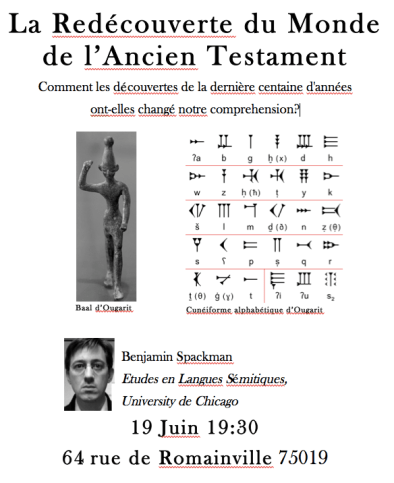 It was open to the public, and although several groups of an inter-religious nature were invited (apparently the local ward has had some contacts and activities with them before), I think most of the 30-odd in attendance were LDS. I prepared about 35 slides, with a projecteur, divided into three parts.

1) Why “Rediscovery”? In short,  the full “World of the Old Testament” was lost. We had nothing but the Bible. It was akin to having a deep textual tradition about Cuba (like Israel, a relatively small, powerless, and insignificant country) but knowing nothing about Spain, Russia, or the USA, the major influences on it, then discovering their own massive records. Israel was surrounded by much larger and influential nation-states and empires, like Egypt, Assyria, and Babylon.

2) What Have We Discovered? Here I picked 7 major rediscoveries of a textual or linguistic nature, e.g. The Behistun inscription, which cracked open Akkadian; the Lachish Letters; The Elephantine Papyri; The Rosetta Stone, and so on. We have hundreds of thousands of non-Biblical texts that we can read today. Most are only of interest to specialists, but all tell us something about the world of the Bible.

3) How Have these Discoveries Changed our Understanding? Here I gave several specific examples of things we now understand in the Bible thanks to these discoveries, divided into general areas: Linguistic, Literary, Historical, and Cultural/Religious/Weltanschauung. (BTW, I can’t write Weltanschauung without linking to Calvin and Hobbes. The first time I wrote it on the board in an Institute class, I also misspelled it, and a German-speaking RM corrected me. )

As you might guess, for the last category I highlighted some insights into Genesis 1 that we get when we read it against other ancient Near Eastern creation accounts (Link 1, link 2) instead of reading it against a modern, post-Enlightenment scientific/historical background.

Generally, it went well. I’d prepared some general notes, and memorized some new vocabulary (how do you say “siege” or “Aramaic” in French?) A few times when I went off script, I stumbled slightly or had to use odd circumlocutions, but I was quite comfortable by the end. With the Q&A, it lasted about an hour, after which we had some nice refreshments. There was definitely some enthusiasm among the audience; for most of them, this was completely new information. Some of them were having problems processing, but that was kind of the point. I wanted to overwhelm with just how much we now know (and have yet to learn) about that world, that there is much more than just the Bible.

Second lecture to come in two weeks (probably The World of the New Testament, Between Malachi and Matthew), when I’ll make another report.

(Added later: A version of this became a web presentation to kick off my Benjamin the Scribe blog, here.)

← The Approaching Zion Project: Deny Not the Gifts of God
Reconciling Modesty with Feminism →