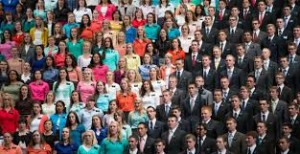 The reaction to yesterday’s two-hour Worldwide Leadership Broadcast on missionary work has been mixed. Given the pre-broadcast hype, some viewers were undewhelmed; others were impressed. Our friends at BCC live-blogged the event with reader comments ranging from cynically dismissive to excited and energized. Below I’ll give links to media and LDS coverage, offer my own summary, then add some commentary.

Given that one theme of the new broadcast was that missionaries will now be given increased access to computers, iPads, online social networks, email, and the Internet, it seems right to list links to online coverage of the broadcast.

As noted in the media stories, full-time missionaries will soon be given greater access to computers and iPads to communicate with ward members and investigator contacts as well as to use social networks and the Mormon.org chat function to proselyte and teach online. This will be rolled out over the next year and a half. What else was covered in the meeting? From my notes: 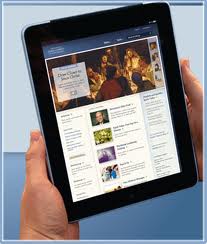 Some people have been underwhelmed by the broadcast and thought it was overhyped, but it was obviously a very effective way to draw everyone’s attention to the broadcast and to highlight a renewed appeal to members to reach out and support the growing LDS missionary corps. Hey, we’re all talking about it, and it is getting wide media coverage. In terms of getting people’s attention and getting the message to the intended audience, this was an A+.

I have argued before that labor/capital mix of the LDS missionary operation has too much labor and not enough capital. If you want to make them effective, give every missionary team a vehicle, an office, and communication tools like cell phones and computers. The changes just announced are a significant step in that direction: missionaries will get iPads, use email, and use LDS chapels something like offices. The result should be that the productivity of missionary labor will go up. This seems like a real step forward.

It is said that no battle plan survives contact with the enemy. The same holds true for this new missionary plan: as it is rolled out, there will be some modifications. Some things will work well, some not so well, and one or two things might work out rather badly. It seems like we’re expecting additional maturity and discipline from our full-time missionaries as they are given new freedom to use email, social networks, and the Internet — while at the same time we are now sending out younger missionaries. Consider, for example, that some new missionaries will be younger than some of the high school seniors in the wards they are assigned to work with. Risky as some of these changes may be, there really is no other way to move forward. As Elder Perry said: “The Church must adapt to a changing world.” We’re adapting.

46 comments for “Same Old Thing or A New Vision for Missionary Work?”