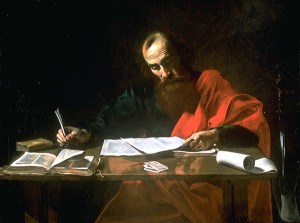 This is the third post (first, second) in a series on the New Testament. This post covers what should probably have been the first post: consideration of the seven undisputed letters of Paul, chronologically the earliest documents in the New Testament, written in the 50s. They give us the best information we have on the early Christian churches scattered around the Roman world. Oddly, Paul’s letters receive much less attention in most LDS discussion of the New Testament than the gospels.

A helpful edition of the New Testament that presents the books in chronological rather than traditional order is Marcus Borg’s Evolution of the Word: The New Testament in the Order the Books Were Written (HarperOne, 2012). It presents paragraph-formatted NRSV text with few annotations but with short introductions to each book stressing context, authorship, and chronological dating. There is broad agreement that the seven undisputed letters (1 Thessalonians, Galatians, 1 Corinthians, Philemon, Philippians, 2 Corinthians, and Romans) were authored by Paul in Greek in the 50s, roughly twenty years after the short ministry of Jesus in Galilee and Judea. A basic issue for LDS readers is this: How should LDS readers read and give context to Paul’s letters in relation to the gospels (our favorite New Testament texts) and to LDS scripture? Does the chronological priority of Paul’s undisputed letters affect how we read them and what we can take from them?


Early Christian communities were small and intimate. According to a recent scholarly estimate, there were about two thousand followers of Jesus by the year 60. Perhaps half of these were in the Jewish homeland and the other half in other parts of the Roman Empire. Thus, with perhaps an exception or two, the size of a community would have been fifty or fewer.

Using LDS standards of comparison, there were no stakes or wards, just branches. There was no Church Handbook of Instructions, there was no New Testament, only oral tradition and the occasional visit from a roaming apostle or evangelist. If you’ve ever attended a small remote branch of the LDS Church for a year or two, you get the idea. No wonder they picked up odd beliefs and practices. No wonder letters like Paul’s were treasured and preserved by these early communities.

Occasional letters, by committee. A couple of articles from How the New Testament Came to Be (BYU Religious Studies Center, 2006) are really quite helpful here. Eric Huntsman’s “The Occasional Nature, Composition, and Structure of Paul’s Letters” reminds us that each of the letters was “a response to specific situations in the early branches of the Church.” Huntsman notes that in 1 Thessalonians, for example, a key issue was that “the Thessalonians, and possibly Paul himself, expected the Lord to return soon.” [He didn’t, hence the dramatically different view of the Second Coming in 2 Thessalonians, which Borg dates to about 110.]


Contrary to modern notions of letter writing, Paul did not sit alone at a desk quietly composing his epistles. Instead, the composition process was a more lengthy procedure that involved others at every step. Paul probably stayed with other Christians in his travels and would have enjoyed little privacy. But more significantly, his letters frequently included in their opening formula references to coauthors, who are different from others, such as scribes ….”

Sounds like composition by committee. Think of young Timothy (identified as a coauthor at 1 Thess 1:1) blurting out “the day of the Lord will come like … a thief in the night!”, then Paul saying, “I like that. Silvanus, write that down.” While it is not hard to argue that Paul adopted the final draft of a letter as his own, committee authorship nevertheless raises interesting questions regarding inerrancy, inspiration, and original autographs.

By the hand of scribes. In the same volume, Lincoln H. Blumell’s “Scribes and Ancient Letters: Implications for the Pauline Epistles” highlights the role of scribes. Everyone, it seems, used them. I suspect that the technology of reed pen, ink, and parchment, with the necessity of writing legibly in small script using these crude tools, almost required the use of a professional scribe, even for a literate author like Paul (see Gal. 6:11). Furthermore, scribes became the ancient equivalent of ghost writers, spell checkers, and grammarians, providing a sliding scale of assistance depending on the author’s skills and directives. Blumell notes, “In most cases, an individual scribe could imprint a distinct literary style on any document he or she wrote, which would greatly affect its form, vocabulary, and perhaps even content.” Obviously, this raises questions about the practice of imputing non-Pauline authorship based on comparing the vocabulary and style of different Pauline letters.

The earliest Christian witness. A couple of content items from these earliest New Testament documents. We often think of Paul’s teaching on faith, hope, and love or charity as mature reflection that emerged in longer letters, but it pops up in the very first teaching of the very first letter. It is the first thing we have a record of Paul communicating in writing:


We always give thanks to God for all of you and mention you in our prayers, constantly remembering before our God and Father your work of faith and labor of love and steadfastness of hope in our Lord Jesus Christ. (1 Thess. 1:2-3 NRSV)

Second, the later date of the gospels and the influence of each author’s point of view on their respective gospel narratives leads some scholars to question their historical reliability. Luke 1:1-4 makes it clear the gospels were dependent upon earlier accounts of unknown quality and upon oral tradition (stories and sayings). Paul gives few details about the life of Jesus, but what he does provide is reliable (in the sense we know Paul wrote it) and very early (decades before the gospels were composed). So here is what the oral tradition in the early Christian church was teaching about Jesus in the 50s and earlier, as related by Paul to the Corinthians:

There’s a lot in that paragraph: a doctrine of sin; a theory of the atonement; the death and resurrection of Jesus; looking for prefiguring passages in the Jewish scriptures; and a list of resurrection witnesses. Note how Paul writes himself into the Christian story, which starts with Jesus, runs through Peter and James, then comes to Paul the author of the letter. Not only did Paul write himself into the story, he brought his readers into the story as well: “… so we proclaim and so you have come to believe.” And we, too, are readers of Paul.

Conclusion. In answer to the questions posed at the beginning of the post, it is my view that, as the earliest New Testament documents, Paul’s undisputed letters carry an extra measure of credibility, both as to Paul’s own views and as to the beliefs and practices of the early Church (or at least as to one influential set of beliefs and practices in a diverse early Church). It is well worth an LDS reader’s time to get an NIV or NRSV Study Bible and read Paul’s letters in a clear, understandable language with helpful annotations and introductions.

← Get with the program
And shall not lead astray: the Church and ‘infallibility’ →

9 comments for “The Earliest New Testament”