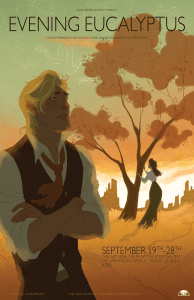 A couple of weeks ago, I reviewed Mahonri Stewart’s two plays The Fading Flower and Swallow the Sun. I liked them both. I’m also reading the anthology of plays that he compiled and edited Saints on Stage. So far it’s been fantastic just for the historical overview of Mormon drama from the Restoration until today, and I’m just getting into Robert Elliot’s Fires of the Mind. So, when I learned that his theater company (Zion Theatre Company) was putting on a Kickstarter campaign, I jumped at the chance to back it.

Zion Theatre Company is currently in its third year, and you can check out reviews of past productions on their website. They do plays by Mahonri Stewart as well as other talented Mormon playwrights, and even though I haven’t been able to see a production in person yet (they are in Provo, after all, and I’m in Virginia) I was happy to see that the $25 backer level comes with digital downloads of two of their past productions.

The Kickstarter campaign is for their fourth year (2014) and they already have 4 plays slated for production:

Since ZTC has been successful so far, the purpose of the campaign is to support faster growth. If you would like to see one of their plays in 2014, or just want to support a growing Mormon artistic community, I think this is a great opportunity. Check out the campaign for yourself, and tell all your friends! :-)