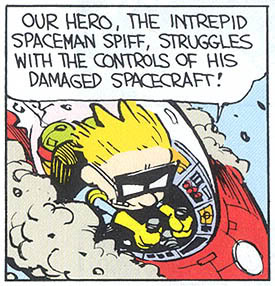 Deep down, we all think we’re Spaceman Spiff.

Last week I wrote about the conflict between a basic axiom of human behavior (we tend to see ourselves as heroes in our own stories and rationalize our behavior accordingly) and the requirement that sinful actions be in some sense deliberate in order to be sinful. I did this primarily by suggesting that, while the original commission of a sinful act often occurs under duress of some sort (thus mitigating against it’s nature as a deliberate choice), we frequently compound that sin by subsequently trying to rationalize it.

I’d like to conclude (for now, anyway) my posts on this subject by looking the other direction: backwards in time.

One response to my original argument may simply be to deny the premise that people don’t view their sinful actions as sinful at the time that they commit them. In one sense, this must be true. We aren’t held responsible for violations of moral laws we are really and truly ignorant of. But it’s a mistake to see this issue in terms of stark binary opposites, as though the only options available are “know” and “not know.” Let me suggest two realistic descriptions of the frame of mind of a person at the time that they commit a sin:

Keep in mind that what I have in mind is not total absence of moral deliberation, but only partial absence of moral deliberation. This is a deeply intuitive concept, and it’s reflected, among other places, in the way that premeditation is considered in criminal law. Reacting in rage to the immediate discovery that your spouse is cheating on you is rightly considered a different degree of criminality than coldly planning a murder that takes place weeks or months after the discovery with ample time for consideration and second-guessing along the way.

I think the reason that this line of reasoning is often rejected is that it appears to grant undue immunity to those who commit sin, but that’s a very narrow interpretation. I believe that what it really does is shift the location of the sin in question. Consider this simplified thought experiment:

Scenario A – Bob starts a new job in May that requires a longer commute. The first week, he frequently loses his temper during the commute (and throughout his day). Aware of the toll the stress is taking on his patience, he works to counteract it with prayer, meditation, and other coping strategies. One night in the first week in June, his young children are scared by stray cats fighting outside the house, and Bob is able to tap his reservoir of patience to calmly and lovingly assuage their fears and put them back to bed.

Scenario B – Bob starts a new job in May that requires a longer commute. The first week, he frequently loses his temper during the commute (and throughout his day). Although he is aware of the toll the stress is taking on his patience, he doesn’t work to counteract it. One night in the first week in June, his young children are scared by stray cats fighting outside the house, and Bob finds himself shouting and screaming at his terrified children for waking him up for such a silly reason before he even realizes what is happening. 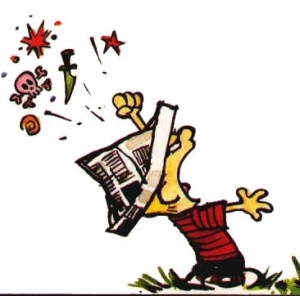 According to my analysis, Bob (in Scenario B) has not really committed a sin when he screams at his children as much as we might initially believe because it’s not really the result of rational deliberation. However, he is at fault nonetheless for failing to proactively work on his temper in the month leading up to the event. His guilt is not actually ameliorated, from this view, but simply moved from a largely instinctual reaction one June evening backwards in time to a series of deliberate decisions that he made in May.

Why does any of this matter?

First of all, it explains Matthew 7:1 (“Judge not…”). The fact that Bob loses his temper one June night is objectively bad  (vs. the standpoint of perfect patience and love), but how bad is it? There’s no way to know. As my example shows, if you want to know to what degree Bob has sinned, you’d have to know all about his private struggles in the weeks and months before (or not) to try and deal with the genetic predisposition to bad temper he has (or doesn’t) and all kinds of other inaccessible counterfactuals. This conception of sin allows us (in principle) to more cleanly separate objective assessment of sinful action from subjective judgment of sinners. It’s not just that we shouldn’t judge. It’s that we can’t.

Secondly, I think it works against a pernicious idea that sins are discrete events–like black marks–that must be wiped away in order to return to some prior state of immaculate purity. This is compatible, of course, with descriptive language of sins “like scarlet“, but it’s a superficial interpretation. Sinful acts are not the problem per se, they are evidence of the problem. It’s not about what we do, but rather about what we are.  A sin is an indication that we’re imperfect but it is not–without a deep understanding of the person’s life before and after the sin–enough to really judge the degree of kind of sinner we’re talking about.

Yes, we need our crimson sins to become white as wool through the blood of the Lamb, but this doesn’t imply a fastidious fascination with outward sins as discrete marks to be repented for on a case-by-case basis. Christ’s atonement is not merely bleach for metaphysical moral blackmarks; it’s about changing our very nature. (Has anyone else wondered what it would be like to get to the Final Judgment only to be reminded that, although you had repented for 123,456 of your sins, there was that 123,457th that you’d forgotten about and never specifically cleaned away…)

← The Bible in Jacksonville
Guest Post: The Parable of the Two Sons →

32 comments for “Further Thoughts on Sin”