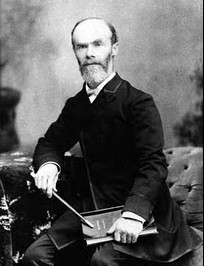 For many members of the Church the most intense period of “faithful, energetic service in the Kingdom of God” during our lives is our missionary service. So it is no surprise that many of the ideas expressed in the Teachings of the Presidents of the Church: Lorenzo Snow lesson #15 are characteristics that we associate with missionaries—service as “ambassadors of Christ,” and “helping others receive salvation” are quickly listed as things that we too should adopt in our service in the Kingdom. Often we use missionary service as an example for how our own service should be conducted.

The author of this poem, Joseph L. Townsend, is best known as the author of many of the hymns in our hymnal today, including “Choose the Right,” “The Iron Rod,” “Let Us Oft Speak Kind Words To Each Other,” and “Hope of Israel.” Born in Pennsylvania in 1872, Townsend came to Salt Lake City, Utah to improve is health and discovered Mormonism there as well. He served an LDS mission to the Southern States, owned and ran a drugstore in Payson, Utah for 15 years and then taught at Brigham Young Academy (the high-school predecessor of BYU) for a couple of years before teaching at Salt Lake City High School. And he wrote poetry — 10 of his hymns are in our current hymnal.

Over the country far and wide,

Earnestly reaping by the way,

And two and two, and side by side,

Over the turnpikes rough and worn,

Over the lanes through wheat and corn,

Treading the paths in wood and field,

Where honest folks a shelter yield,

Oft on the wayside rocks or trees,

Hungry and footsore, long they rest,

Talking of home and liberties

Ne’er given to a weary guest,

Thousands of miles away from home,

Daily they on their circuit roam,

Facing the storms, or dust and heat,

Until their mission is complete,

Bible in hand, they teach the truth,

Calling on all, in age or youth,

To heed the Gospel plan divine

Freely they give the words of life,

Ever opposed by Satan’s strife;

Ever withstood by Pharisees

Who fight the truth by calumnies

As when it first was given.

Ever at work, their lives at stake,

Warning the world of what will be,

Warning the world to turn, forsake,

And flee the harlot mystery.

Threatened with clubs and coats of tar,

Hated by priests who truth deride,—

The welcome that the Elders bide

‘Mid foes that love a fable.

Seeking the humble, rich and poor,

Calling to all: Repent, obey

The ordinance that will insure

Over the wide land everywhere

Swiftly the Gospel now they bear:

Soon will the land be left untilled,

The Gentile times be all fulfilled,

And fallen every nation.

Judgments and plagues, with war and fire,

Over the world will swiftly go,

With millions crying in their woe

Who heeded not the warning.

Then will the Saints enjoy their rest,

Gathered together in the West;

Living beneath the laws of God,

Secure, while His avenging rod

Yearly from Zion still they go,

Happy are they when one believes;

They may return with gathered sheaves

As brands plucked from the burning.

Tramping with neither scrip or purse,

Sheltered by friends while foes accuse,

Leaving it all for God above

To mete to all, in hate or love,

The sure reward they’re earning.

O, when the Book of Life is read,

There may the reapers and their sheaves,

Named with the Church that Christ has wed,

Be found upon its sacred leaves

Then will the reapers joyful be

Greeting the souls they helped to free.

Upon the lone or dusty way,

No more, no more, forever.

The missionary service described above is a bit different from what missionaries experience today. While missionaries today do have to walk, in general they don’t have to travel between towns and cities on foot as Townsend describes. Nor do missionaries have “their lives at stake” nearly as often as they did in Townsend’s day—the above poem was published just a few years after the well-known murder of Joseph Standing in 1879 and in the wake of the Contributor’s successful 1880 effort to place an Italian-marble obelisk over his grave. Townsend describes the missionary difficulties, tying them to Christ’s own trials thus:

Freely they give the words of life,

Ever opposed by Satan’s strife;

Ever withstood by Pharisees

Who fight the truth by calumnies

As when it first was given.

But Townsend’s poem isn’t just about missionary martyrdom. He highlights not only the trials of missionary work (such trials in service are generally ignored in the lesson) but also the purpose and benefits of this service. In the last two stanzas, the poet suggests that those who serve must not worry about their difficulties and focus on the reward:

Leaving it all for God above

To mete to all, in hate or love,

The sure reward they’re earning.

And what is that reward?:

O, when the Book of Life is read,

There may the reapers and their sheaves,

Named with the Church that Christ has wed,

Be found upon its sacred leaves

Then will the reapers joyful be

Greeting the souls they helped to free.

Perhaps that reward is what we should focus on in our own service in the Kingdom of God.