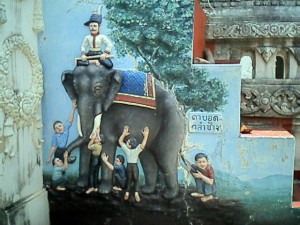 The story of the blind men and the elephant is as useful as it is widespread. It features in Jain, Buddhist, Sufi and Hindu lore and has also  been applied in modern physics and biology. In case you haven’t heard it before, the essence of the story is that a few blind men each touch a different part of an elephant (like the tail or ear or leg or tusk) and each conclude that the elephant is like the part that they see (brush, fan, pot, or spear). Depending on the version of the story, they either cooperate to understand the elephant as a whole or get into a fight because each clings to his own perception to the exclusion of all others.

Thus the story of the blind men and the elephant has a happy resolution, or at least it can have a happy resolution, because the different perspectives can all be resolved. The function of the blindness in the story (sometimes the men aren’t blind but are in a dark room) is to temporarily hobble their perspective. Because of their inability to see, they have to get very close to the elephant, and this proximity robs them of the chance to step back and adopt a wider perspective. Since what we see depends on our perspective, they are ultimately limited not by lack of site, but by lack of perspective.

The perspective needed to see the whole truth of the elephant, however, is a perspective that’s readily available. Rumi, a Persian poet and teacher of Sufism from the 13th century, ends his version with the observation that: “If each had a candle and they went in together the differences would disappear.” In that case bringing a light literally creates the ability to step back and look at the elephant as a whole. But even with blind men, the possibility is there to aggregate the individual observations and metaphorically position themselves at the correct vantage point from which the entire truth comes into frame.

But what if some vantage points are not so readily accessible?  I think that a lot of life’s most important truths fit into this category. Sometimes the truths we seek are not merely about collecting enough facts. Sometimes it’s a question of knowing which facts are more important or how the available facts relate to each other. Sometimes the crucial facts are outside our ability to comprehend. (Consider another famous example: how does a fish know what “wet” means?)

One of the reasons I studied economics in graduate school was because I wanted to know, definitively, answers to some of the contentious political issues of our day. And it turns out that on some issues, knowing economics really does provide a fairly unambiguous (albeit politically intractable) solution. But on many, many other issues there is no consensus. The arguments just get increasingly complex, nuanced, and specialized until you reach a point (or at least, I know that I did) where you realize that there will always be people with more expertise than you who disagree with each other.

What then? What happens when you’re one of the 5 blind guys touching the elephant, and just stepping back (literally or metaphysically) isn’t an option? 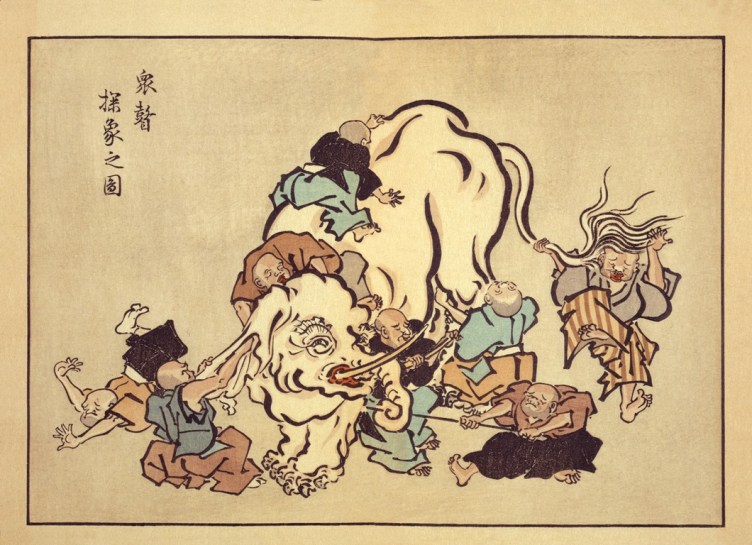 My hope, at least, is that there’s a sense in which a community can be be bigger than the sum of the parts. This isn’t about the wisdom of the crowd. (That’s a scenario where aggregation causes unbiased error to cancel out.) It’s the idea that a community can behave like a complex system and manifest emergent behavior. It’s the idea that maybe if I’m true to the world as I see it and my friend is true to the world as she sees it and both of us are contributing to the same community, that there’s a sense in which the community will be able to integrate the perspectives even if we cannot do so individually.

I’m not certain that this does happen, but I like the idea for two reasons.

It’s beneficial, in a sense, because it’s comforting. If my friend and I both have this belief, it creates a framework for genuine tolerance and plurality. Rather than an either/or contest for victory, it’s possible to perceive divergent views as being mutually cooperative elements within a greater process. Of course in practice formal institutions need to enact one policy or another that creates real winners and losers at least in the short run. But over the longer run we don’t merely choose from the set of available policies; we envision new solutions. And that, I think, is where disagreement can be fruitful and a creative dialectic is possible.

But is it true? Because nothing in this post so far has had a whiff of simplistic subjectivity. I’m not asking if we’re all right “for ourselves.” I’m presuming that objectively reality does, in fact, exist and asking whether we’re right with respect to it. So: Does society really work like this, or is it just a beneficial lie or happy fairy tale?

I suspect it is a self-fulfilling prophecy. It belongs to that class of beliefs whereby reality is determined directly by faith. I think that a society of people who believed in this process would be a society where this process really existed. It is the potential for unity without unanimity, and as such I believe it is one of the stepping stones towards Zion.

← Literary Lorenzo Snow #16: The United Uplift of the Hand
On Faithful Puzzlement, Belief, and Choice →

25 comments for “Maybe We’re All Right”