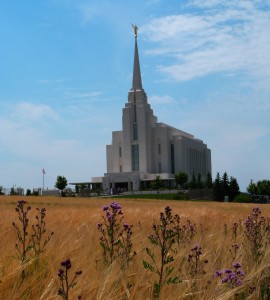 If you’ve ever driven across the country, you’ve probably stopped for gas or lunch in some town you’ve never heard of and observed in astonishment that people not only live there, but appear to lead lives as happy and meaningful as any other American. Those lives may include more baseball or rodeo than you would choose for yourself, but the people there seem content enough. You see parks and schools and streets with decent-looking houses and a reasonable number of stores, and you wonder what it would be like if you lived there.

Moving to Rexburg is like stopping for gas in a place like that and failing to get back on the highway to wherever it was you thought you were going.

After growing up outside the Intermountain West and roaming the world outside the Mormon Corridor, what is it like to live in Rexburg, the LDS answer to Hogsmeade, the most Mormon place on earth? I can’t give a definitive answer, as I (a Mormon who likes being a Mormon and generally likes other Mormons) only lived for three years in one (98% LDS) neighborhood of Rexburg. But my experience was that life in Rexburg is, overall, pretty fantastic.

Since the attractions of a smallish town with harsh winters in the reddest county of a deep red state may not be obvious, let me offer some examples.

The church, on the other hand, worked more or less like it does in other places we’ve lived. After three years, I cannot confirm the existence of the specter known as “Utah Mormonism” or “Mormon Corridor Mormonism,” as opposed to just plain Mormonism. People were no more or less likely to be knowledgeable about their religion, attend meetings reliably, feel comfortable at church, or struggle with their faith.

I have no insight into the wisdom or efficiency of Rexburg’s citywide administration. The ward and neighborhood were fantastic, the stake efficient, and the city merely competent. What made life in Rexburg pleasant operated on geographic scales that were either larger or more localized.

If you tried to distill some general principles that account for Rexburg, you might come up with three things.

What I’ve written so far may sound like a paean to religious homogeneity. Perhaps it is one; Rexburg wouldn’t be what it is without its predominately Mormon population. Should it be shameful to enjoy living in Rexburg as one of the majority? No, I don’t think so. The distinctiveness of Rexburg and the Mormon Corridor more broadly is part of the regional diversity that makes the United States interesting. I’ve enjoyed living in Urbana and Lansing and Fayetteville, but you would hardly notice if you swapped one of those cities with any other. Rexburg, on the other hand, is as culturally distinctive in its own way as Charleston or New Orleans. The country would be a culturally poorer place without a bunch of Mormons living together in the West.

I wouldn’t presume to speak for anyone else, but I don’t think that enjoying life in Rexburg is predicated on being white, middle class, male, married, or having children. My immediate acquaintances who also seemed to find Rexburg attractive included those who were non-white or interracially married, in blue-caller jobs or living in economically precarious circumstances, female, single, and childless. Enjoying Rexburg is not even predicated on being Mormon; we knew of some non-Mormons who had moved to Rexburg because they liked the community. (On the other hand, not everyone will enjoy living in an irony-free zone, and the city is not a good match at all for people – usually Mormons, in most cases I knew about – who are resentful of the church and wish to avoid all contact with it.)

Sometimes one reads comments on Mormon blogs to the effect that one couldn’t possibly live in Utah, as one is so much different than those other, Utah Mormons. But the truth is that if you have any commitment at all to the religion of your co-religionists, then you share a lot of fundamental values that go much deeper than matters of politics or taste. You don’t realize how much you really are like the Mormons of the Intermountain West until you spend some time living among them.

After living in areas where Mormons are the rare exception rather than the rule, in wards or branches where auxiliaries may not be complete and standard procedures may not be followed with exactness, it’s easy to get the feeling that you’re plugging holes in the dike, holding back the water in as many gaps as you have fingers. But sometimes you recognize that you’re the one who’s leaking from a hundred places, and that dozens of people are helping to plug the gaps in you. That was what Rexburg was for me.

Those who are interested in intentional communities or localism should come take a look at Rexburg and its neighborhoods: this is what Mormons built, when they were asked to build Zion. I don’t know if they succeeded, but they at least built something like Mt. Nebo, where you can catch a glimpse of the promised land that you yourself will not enter.

What is it like to leave Rexburg, to get back on the interstate and keep driving after staying much longer than you had planned, perhaps not heading towards the same destination as before? Even for an imperfect Zion, the exit protocol is much the same: You sit. You weep.