My local mass transit has this sign posted inside: 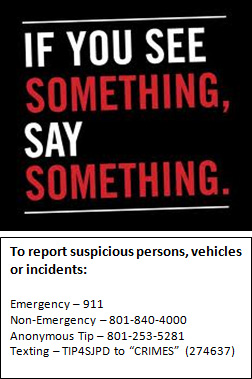 It is much easier to ignore a problem, especially someone else’s problem, than it is to get involved. And this “see something, say something” campaign is set up for the weak or cowardly. After all, it doesn’t require that you say anything to the perpetrator; you can call in an anonymous tip and hope someone else will fix the problem.

One of my favorite lines from Wes Anderson’s film The Fantastic Mr. Fox is when Kristofferson confronts a beaver who is bullying his cousin, Ash:

Kristofferson: Are you a bully? You’re starting to sound like a bully.

He saw something, he said something. He spoke directly to the bully, not to some absent authority figure. Later, the beaver is again bullying his cousin:

Beaver’s Son: We don’t like you and we hate your dad. Now grab some of that mud, chew it in your mouth, and swallow it.

Beaver’s Son: Cuss yeah you are.

[He picks up a large glob of mud and shoves it in Ash’s face. Ash makes a gagging sound but does not react further]

Kristofferson: [takes off his shoes] Don’t do that.

Beaver’s Son: Why’d you take your shoes off?

Kristofferson: So I don’t break your nose when I kick it.

[He proceeds to take Beaver’s son out with some precision karate moves, ending with a throwdown in the mud. Beaver’s son walks away quietly sobbing]

Ash: I can fight my own fights.

Kristofferson: [turns to Ash] No you can’t…

I like this decisive, direct example of anti-bullying, even though I personally do not like confrontation or physical violence. As every kid who has suffered the brunt of bullies at school knows, just talking about a problem as often as not only serves to delay and intensify further nastiness. Adults are powerless to protect children, and in some cases, adults, the people with power and authority, are the bullies. Roald Dahl’s oeuvre is filled with such miserable and misery-generating degenerates.

I remember reading Ender’s Game for the first time. When Ender was confronted by a bully in the bathroom, he decided immediately to attack, to inflict such damage that the bully would never bother him again. He followed through, killing the other child. I was impressed by the strategy–win one battle decisively to avoid an endless series of altercations. And I was horrified by the idea of one child killing another, shouldering the responsibility of ending another’s life.

Ender acted out of self-preservation. Kristofferson acted out of altruism. Neither was willing to be complicit with bullying. Both effectively ended the bullying through violence. But Kristofferson was much softer than Ender, perhaps because he was coming from a position of power and respect that the subject of the bullying did not have. He gave the bully fair warning. He tempered his violent response to avoid inflicting permanent physical damage. In the film, Kristofferson’s method seems to have been as effective as Ender’s, but without the psychic toll of realizing one has become the aggressor.

Therefore, my beloved brother, Moroni, let us resist evil, and whatsoever evil we cannot resist with our words, yea, such as rebellions and dissensions, let us resist them with our swords, that we may retain our freedom, that we may rejoice in the great privilege of our church, and in the cause of our Redeemer and our God (Alma 61:14).

That we need to resist evil, violently if necessary, is clear. But the military strategy divinely approved in the Book of Mormon is defensive. Preemptive strikes either do not end well (Teancum’s assassination of the Lamanite king in Alma 62:36) or pose serious moral dilemmas (Nephi killing an unconscious man in 1 Nephi 4:10-18). And as for warring on behalf of others, the people of Anti-Nephi-Lehi were protected by the Nephites from their common enemy. The Nephites did not go to war solely to save the people of Ammon. They were fighting primarily to save themselves.

Kristofferson and Ender and Moroni all had certainty that what they did was right and necessary. That certitude made them strong and allowed them to stand confident and act without hesitation. It’s one thing to know that what you are witnessing is wrong; it’s another thing altogether to know what to do about it. I don’t know what our country’s course of action ought to be now. I do know that inaction is often taken as tacit approval, and I do not want to be guilty of the sin of complicity, not these atrocities that I hear about. My lack of conviction makes me hesitate, and to my shame, it makes me complicit.

← The Abyss of Nothing and Everything
Bless This Food →