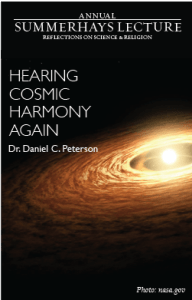 Thursday at 7pm in the JSB Auditorium at BYU, Dan Peterson will speak on how our understanding of the natural world through history has reinforced or weakened belief in God. His title for the 2013 Summerhays Lecture is “Hearing Cosmic Harmony Again.” Here is an introduction from the Summerhays Lecture web page:

For many centuries, religious believers of all stripes have affirmed, in the words of the Psalmist, that “The heavens declare the glory of God; and the firmament sheweth his handy work.”

But, although the Jesuit poet Gerard Manley Hopkins could still exclaim that “The world is charged with the grandeur of God,” scientific discoveries had seriously undermined that view–or, at least, were being claimed to have done so–by the time of his too-young death in 1889.

The serious subversion had begun, or so the story is often told, with the Copernican “revolution’s” dethronement of earth and humans from their privileged place at the center of the universe. It continued, rather ironically, with Sir Isaac Newton’s portrayal of that universe as governed by a remorseless chain of cause-and-effect operating under mathematically rigorous physical laws, and it seemed to have been proven by Darwin’s apparent demonstration that life, in all its varieties, had emerged as a result, merely, of purposeless chance.

I will attempt to show, with special emphasis on astronomy and cosmology, that this picture of the development of science and its implications–the picture with which I grew up– is historically misleading at several crucial points, and that some elements of current science suggest that there is still, to say the least of it, plenty of room for theistic conviction.

← Paradigms and Stumbling Blocks
Just because you heard it at church, doesn’t make it true. →