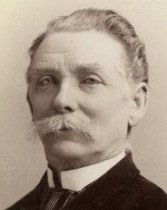 Many of our hymns have a martial air to them, often echoed in their messages. We are called “Christian Soldiers,” marching on to war, and we call to the “Elders of Israel” to join the campaign. And often the Priesthood is called “God’s Army” in an attempt to emphasize, I suppose, its size and power and the brotherhood we often feel in the priesthood. The following poetic excerpt not only captures some of that brotherhood, but also explains clearly that this “army” is not a military, but something far different, more like what is described in Lorenzo Snow lesson #17. The author of this excerpt finds this difference not in marching or shouting, but in the singing of a hymn of Zion.

The author is the prolific but lesser-known Mormon poet Henry W. Naisbitt (1826-1908). When his father died when he was still a boy, Henry neglected school to help his mother, but somehow managed, despite the family circumstances, to develop a great love for reading, leading to his  literary talent. After apprenticing as a maker of copper kettles, learning to make silk hats and learning carpentry, Naisbitt ended up in the grocery business. He joined the LDS Church in 1850 and immigrated to Utah in 1854. By the late 1800s he had become well known as an exponent of Mormonism and he regularly spoke in the Tabernacle on a variety of occasions and his poems and articles appeared frequently in Mormon periodicals. He served two missions to Great Britain. During the first, from 1876 to 1878, he served as the editor of the Millennial Star. He served the second mission starting in 1898 (at age 72) as a counselor to European Mission President Platte D. Lyman. After returning in 1901, he published a volume of poetry, Rhymelets in Many Moods.

The Power of Song (excerpt)

The hymn has ceased, but yet its spell

Seems fastened on each spirit there;

In glistening eye, and falling tear.

More precious these than sculptured urn,

Or monument of marble rare;

Than obelisk at every turn,

Enshrined within the heart of hearts,

Of thousands of earth’s noblest, best;

Throughout the vallies of the west.

Through every land shall come and bow

In Zion’s courts to swell the tide

Of song, as sing those warriors now.

The mystery then, is solved, and more-

These legions and the arms they bore,

Are not for blood or plunder meant.

They are not in the canyon’s shade

The “reign of terror” to extend,

Nor are they by proud monarchs made

Through peaceful nations war to send.

But in the noblest cause they stand,

Defence of home and blood-bought right;

Greater than any Spartan band

These are the warriors God hath raised,

No national feeling now is raised,

Obedience is the watch-word there.

‘Tis by its power a kingdom grows

To revolutionize the world;

Its standard, Truth, will not its foes

To utter nothingness be hurled?

Ordained a king and priest to reign;

So Israel leads the daring van,

Invincible the legions are

Who sing such strains with one accord

They quail not at the din of war,

But fighting, pray, and serve the Lord

They hail the time to come when one

Shall chase his thousand, bid them flee,

The power of God so strong shall be.

By Priesthood men shall rule and reign,

Its influence wield from sea to sea;

Earth’s myriads shall their rights regain

From tyrants and oppressors free.

Because Naisbitt’s message in the full poem is an homage to Eliza R. Snow and her most famous hymn, he doesn’t detail the purposes and duties of the priesthood. Instead he captures, I think, the feeling that many priesthood holders have when, in a group, a favorite hymn is sung. Naisbitt’s setting is a campout in a canyon, where the hymn, I imagine, echoes off the canyon walls, giving it volume and meaning and helping each priesthood holder feel the weight of responsibility and the support of the spirit.

I think most priesthood holders have experienced similar feelings, similar brotherhood and strength from the spirit following a hymn. And when experiencing such feelings, principles like those in the lesson are understood much better.

← We Are All the Work of Thy Hand
Literary DCGD #34: Farewell to my Mother →