I started thinking about the phrase “stumbling block” recently. It’s such a common phrase that it’s easy to take its significance for granted. And maybe miss its meaning and current relevance.

The literal meaning of the words is obvious, and “stumbling block” is in that sense basically the same phrase as “tripping rock”. But “tripping rock” is fresh and so it forces you to take a look at what the words actually mean: a stone that causes people who are walking somewhere to fall. Why should such an apparently innocuous concept be so deeply ingrained in scripture that it becomes an integrated part of our religious lexicon?

I thought I’d consider another such phrase for comparison. If you used the phrase “tipping point” in the first half of the 20th century, the literal meaning would be clear. But as the graph below (created using a simple Google tool that searches a vast library of books and checks frequency of use), the term didn’t really come into its own until the second half of the 20th century. Of course the Malcolm Gladwell book of the same name explains a lot of the uptick in recent years, and is probably the reason (directly or indirectly) that you’ve heard the phrase. But Gladwell’s book was published in 2000. What explains the upwards trend in the 1960s?

A quote from Rear Admiral Grace Hopper, who was a pioneering computer scientist, might explain that: “Life was simple before World War II. After that, we had systems.”

The concept of a tipping point–of a region where a small change can lead to much greater effects–is a concept that bears a lot of focus in the modern branches of science that were spurred by the extremely complex logistical problems of World War II. Complexity itself (or chaos, in prior decades) has grown in importance in economics, meteorology, computer science, physics, math, and a host of other disciplines that are either new or have undergone dramatic change in the second half of the 20th century.

While an expert trained in one of those fields might associate the term “tipping point” with related technical concepts (like a similar technical term: saddle point), in the broader consciousness the precise meaning of the word is obscured by its use as a buzzword. It’s familiarity obfuscates instead of clarifying. The same thing, perhaps, that has happened to the phrase “stumbling block” on a much, much grander scale. 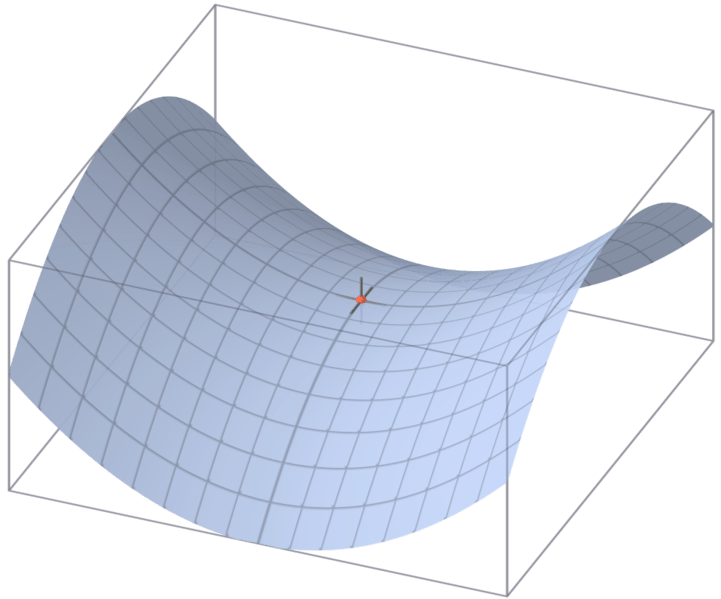 The red dot in this illustration is a saddle point: an equilibrium point that is stable in one axis and unstable in the other.

So here’s why I think that original, literal meaning of the phrase “stumbling block” may have been important. In order to stumble, you must first be walking. If you are walking then, most likely, you have some destination in mind. A stumbling block causes you to stumble when you are on the way to some other destination precisely because you don’t even notice it’s there. It’s a feature of the landscape through which you’re traveling on the way to some other location that escapes your notice.

Traditionally, the term “stumbling block” was linked to the term “scandal” and it referred to the activities of others, which had the appearance of evil, that may lead a person to sin. If your Elder’s Quorom President insults you and you stop coming to Church, then his rudeness is a stumbling block. Similarly, the poor behavior of Nephite Christians described in Alma became a stumbling block insofar as it prevented those who were not members from joining the Church. These are not a very satisfying example for me, because they miss the idea of a stumbling block being unnoticed. If bad behavior turns people away from the Church, then any synonym for “obstacle” or “repellent” would do the trick. Why stumbling block?

I have a hunch a modern example might prove illuminating. If I had to guess at a big stumbling block that was affecting the Church (and, what the heck, I’m going to guess) I would argue that it’s an assumption that there’s a reliable correlation between righteousness and leadership callings. This isn’t going so far as to say that leaders are infallible, but it assumes first, that “righteousness” can be boiled down into some kind of simple, 1-variable aggregation (like the g factor of general intelligence) and 2- that the higher you go up in the Church hierarchy the more of this characteristic you have.

This gets people into all kinds of trouble for reasons too numerous to enumerate, but what’s interesting to me is that it seems to be one of the very few points on which the most hardened and doctrinaire Mormon (who won’t allow face cards in the home) and disaffected ex-Mormons agree: that if Mormonism is true then the leaders ought to be exemplars of righteousness and pillars of virtue. This assumption seems to be lurking behind a great many of individually less-onerous assumptions. Problem with the historicity of the Book of Mormon in the context of the assumption that it describes all of the Western Hemisphere? No problem: adopt the limited geography model.

Except that Elder McConkie was still declaring that Lamanites  were “the principal ancestors of the American Indians,” as late as 1981 and it was as late as 2007 that the Church modified the phrase to “the Lamanites are among the ancestors.” Additionally, Joseph Smith and the Doctrine and Covenants also frequently seem to completely blur the lines between “Lamanite” and “Native American” with no distinction whatsoever. So the assumption of an expansive geography of the Book of Mormon, despite being unsupported by the text, remains propped up by the underlying assumption that the leaders of the Church are reliable in general.

Are they? Is that really a necessary ingredient of our faith? A cursory look at the Old Testament patriarchs would suggest that it is not. Nor, I think, does our doctrine really require it. That the decisions and actions of the leaders will be for the benefit of the Church need not imply that they are invariably correct or even more correct than the actions or decisions of other members who aren’t in leadership positions any more than the belief that all trials can be for our benefit implies that all trials are intended by God. That He can make majesty out of a mess is part of what makes Him God, after all, and so we have the potential to sustain our leaders not because we think they are the best of the best but simply because we’re contributing to the team effort. After all, isn’t that why they would need our support?

D&C 21:5 tells us to receive the word of Joseph Smith (and, by implication, our modern prophets) “as if from mine own mouth,” and we usually assume this means that the word of the Prophet, at least acting in his role as prophet, is as good as God’s. But that’s not actually implied at all, and quite the opposite seems indicated when the same verse urges us to practice “patience and faith” in this endeavor. In other words, we’re commanded to treat the words as if they were God’s, even though they might very well not actually be what God would say if He were around personally. We do our best to honor our leaders doing their best, but we’re really just all muddling through together.

This is an uncomfortable proposition because it takes away the safety net. If we can’t rely on the word of modern prophets to be infallible then there’s no bedrock to which we can point and say “This, this is the ultimate starting point.” It might be uncomfortable, but what other reading of D&C 68:4 actually makes sense?

What kind of comfort can we expect in a world where Abraham was asked to kill his son? Rest is not for this realm. What kind of foundation can we rely on that isn’t Christ Himself? And if our relationship with Him is not rock solid (mine is not), what surrogate could cover the deficiency? This is the world as it truly is, not as we wish it to be. Only when we frankly accept how truly dire the situation is will we really understand that the Gospel, which assures us there is hope despite our total inability to grapple with these problems successfully, really is indeed the good news.

72 comments for “Paradigms and Stumbling Blocks”