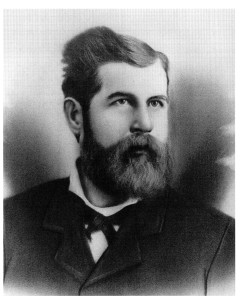 We often use the phrase “a marvelous work and a wonder” to describe the restoration and subsequent spread of the gospel across the earth. And this work is marvelous and wonderful, as lesson 20 of the Lorenzo Snow manual discusses. As a story it has conflict and drama and surprise. And it is, I think, easy to see the hand of God moving the work forward. It may be, however, that the work doesn’t move forward in a straight line, continually growing and improving. Our history shows, I think, some steps back, times when problems led many to leave the Church and the number of active, participating members diminished. So, given that, what does “a marvelous work and a wonder” mean?

The following poem is an excerpt, the first four stanzas of a longer, politically-oriented poem describing the Mormon situation in the 1880s—one of the most dramatic times in Mormon history. Still, despite the difficulties, its author opens the poem with the view that the Church is “a marvel and a wonder.”

The author, James H. Hart (1825-1906), was born in Birmingham, England and joined the Church there in 1847. He served several short missions in the British Isles in the ensuing years before serving a mission to France in the early 1850s. In 1855 he immigrated to the U.S., and served as President of the short-lived original St. Louis Stake until 1857, while managing the Church’s periodical there, the St. Louis Luminary. He lived in Salt Lake from 1857 to 1864, when he moved to Bloomington, Idaho (Bear Lake County), becoming first the postmaster, then a county probate Judge in 1870. He also represented the area in the Idaho State Legislature for six years. For most of the 1880s Hart also served as the Church’s immigration agent in New York City, assisting tens of thousands of immigrants through U.S. immigration procedures and on their way to Utah. Hart was also a frequent contributor of poetry and other material to the Church magazines.

A Marvel and a Wonder

This wondrous age of science, and notable inventions,
Has gained a notoriety for wonderful conventions.
The strongest of all gatherings, the largest and the best,
Is the wonderful assembly of “Mormons” in the west.

Its faith and wondrous increase are without a parallel,
Its glorious ultimatum, the Gods alone can tell;
The prophets have described the work as like a little stone,
That, cut from Heaven’s quarry, has to a mountain grown.

‘Tis dangerous to fall upon this stone, so bright and rare,
And to its boasting enemies its Author says “Beware.”
‘Twill break the strongest legions who in their armor trust,
While those on whom it revolutes ’twill pulverize, as dust.

“Behold,” said the Eternal, “and I will now proceed
To do a work and wonder, a work so strange, indeed,
That men will gaze and wonder, but won’t believe it true,
Though angels and Apostles declare it unto you.”

Hart’s connection of the “marvelous work and a wonder” to the “wondrous age of science, and notable inventions” is interesting, and represents a connection that I think has often been made. Like science and invention, he argues, Mormons’ “faith and wondrous increase are without a parallel.” He goes on to talk of the stone cut from the mountain without hands, prophesied to fill the whole earth.

Of course, science also has taken a step back or sideways from time to time, or has perhaps slowed its pace a little. But that suggestion isn’t what Hart is after. He is trying to suggest that those who oppose the Church are opposing the Lord (fitting with the political material after the stanzas above):

‘Tis dangerous to fall upon this stone, so bright and rare,
And to its boasting enemies its Author says “Beware.”
‘Twill break the strongest legions who in their armor trust,
While those on whom it revolutes ’twill pulverize, as dust.

Despite this purpose, I think Hart does suggest, in the last of the stanzas above, a potential criteria for when “a marvelous work and a wonder” occurs. He suggests that the Lord will “do a work and wonder, a work so strange, indeed, / That men will gaze and wonder, but won’t believe it true.”

I tend to agree. Growth itself, I think, isn’t necessarily evidence of the Lord’s hand. But among other things, the work should be something unusual, something that will make men “gaze and wonder,” and not believe its true. I think this idea is also found in the very phrase we use to describe the Church, “a marvellous work and a wonder,” which doesn’t say anything about growth rate. Instead, this phrase speaks to the bewilderment of observers at what the hand of God has wrought.

← Literary DCGD #39: The Records of Our Dead
A Series of Announcements; or, Be Excited, Be Very Excited →