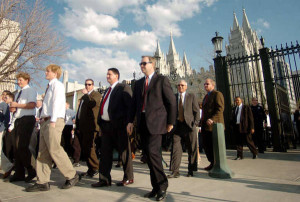 First, why I think excluding Ordain Women was a mistake. I can understand why Church authorities would turn away the Ordain Women activists. The rationale, it seems to me, would be something along the lines of, “This is an attempt to turn a sacred meeting into an organized media event designed to embarrass the Church into changing its doctrine. We don’t want to encourage this group or other groups to use Church meetings in this way.” I understand and appreciate that reasoning, but I think in this case it was mistaken. As a threshold matter, regardless the meeting was going to be used as a media event. Allowing the Ordain Women activists to attend the meeting would have largely defused interest in the story and in any case would have given journalists a less hard-edged narrative. More importantly, however, the number of women seeking entrance to the meeting was very small, there is no reason to suppose that their participation would have been anything other than decorous and respectful, and it would have signaled generosity and goodwill toward these sisters. I don’t think that there would have been any real downside in allowing them to attend.

Second, why do I think that it would be unfortunate if women generally were to begin attending priesthood sessions? I think that it would probably be a good thing if women were ordained. There would be costs and benefits to such an action, but I think that the benefits would outweigh the costs. Obviously, this is not my call, but that’s my opinion if it were my call. I have blogged about this in the past, and have even been mistakenly contacted by a journalist as a supporter of the Ordain Women organization. I think, however, that something important would be lost if priesthood session were turned into a mixed gender meeting. As I understand the reasoning of the Ordain Women organizers, the all male priesthood session is both a symbol of female exclusion from authority within the church and a mechanism by which male power is reinforced. The first part of this reasoning strikes me as difficult to either demonstrate or refute. Symbolism is going to vary a lot depending on the context in which the symbol is seen and interpreted. It makes sense that feminist would read priesthood session’s symbolic meaning in the way that they do, but their reading, it seems to me, is neither necessary nor self-evident.

The second part of the reasoning — namely that female exclusion from priesthood session is a mechanism for reinforcing male power — strikes me as mistaken. The implicit analogy here seems to be to cases like Roberts v. United States Jaycees, where the U.S. Supreme Court required the Jaycees to cease excluding women from their ranks.* Part of the rationale in that case was that much important business was conducted within the Jaycees and excluding women from their meetings in effect excluded women from these important mechanisms of power. Furthermore, the Court in effect reasoned, there was nothing about maintaining an all-male membership that was necessary for the Jaycee’s mission. If I am reading the Ordain Women movement correctly, part of the drive to gain access to Priesthood Session is the perception that this is an important meeting where important matters of general church governance are thrashed out and men are given inside access to power. Equality requires that women have their seats at the power table.

This is the part that I think is mistaken. To be sure, there may be times when important aspects of general Church governance are thrashed out in priesthood session, although after a lifetime of attending the meeting I can’t think of any specific instances. Mainly, priesthood session is a meeting where the leadership of the Church speaks to men as men. The topics tend to revolve around fatherhood, mission preparation, avoiding pornography, and what it means to be a good and righteous man. The talks are important in that they assume a male audience. (Incidentally, I assume that this is why men without the priesthood are given access to the meeting.) This, I think, is to the good. I think that Mormon men and the Mormon community are better for creating a forum in which men are addressed as men by their leaders, called to repentance, and exhorted as men to more godly lives.

There are two objections that one might make to the idea of having an all male forum. First, one might argue that any messages directed toward men may be directed toward them when women are present. This is clearly true. On the other hand, I think that there is something different about the experience that one has if one is in a single gender context. Think about the difference between a lesson on motherhood taught be a woman to a group of women, and one taught by a woman to a group of women and men, even when the content of the message is the same. It seems to me that an important part of the experience of the message is the context in which it is given. There is a solidarity and sense of identification that comes from being in a meeting of brethren (or sisters) that is altered when we have a mixed gender context. (I think that there is an analogy here to some complaints made of late by some Mormon feminists about the way that “male allies” distort their discussions and fora.)

The second objection is that there is nothing to be said of any substance to men that should not also be addressed to women and vice versa. Accordingly, a single geneder forum serves no purpose. This, I think, is mistaken. First, I am sufficiently gender essentialist to think that there are sins, concerns, and challenges that are not evenly distributed across the population and hence that there is substance which is especially relevant to one gender or the other. Second, and more importantly, I think that gender is a central part of how we experience life. To the extent that the Gospel speaks to the human experience, at times it should speak to us as men or as women. Not doing so would be to imagine that something universally important to our experience is accidental or unimportant. Another way of putting this point is that I believe a universal that denies particularity is either vacuous or pernicious. Hence, I think there is value in speaking of the Atonement for men, not because there is anything about the Atonement or its application that is uniquely male, but because to speak of a universal phenomena like the Atonement requires that we talk about how that phenomena plays out in the particularities of our experiences, including the experience of gender.

*The holding was quite a bit more complicated than that, but that’s the gist of the case.

← Why is climate change not popular in Deseret?
Standing as Witnesses →