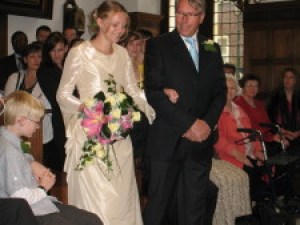 A Dutch Mormon non-same-sex marriage: a proud father with his daughter
The involvement of the LDS church in the issue of same sex marriage in the United States runs very deep and is highly emotional. The battle for proposition 8 was intense, highly visible and centrally directed and seemed at the time to result in a repeal of the liberty for same sex partners to formally and legally marry in California. At the time it drew a lot of attention in Europe as well, reflected in major articles in journals, newspapers and magazines. One of these was Time Magazine, the European version, reporting on the massive investment the Church did in California to further the cause of proposition 8. Also church members in the Netherlands became aware of it, and some joined in. Ironically, quite a few of them thought that the Church had ordained that prop 8 should be defeated, so prayers were sent to heaven to block that evil proposition 8. It seems the Lord listened to them in the end …
During the prop 8 debates, apostle Ballard addressed a meeting of European church leaders. He asked whether representatives of the Dutch stakes were present. Two were there; one of them, hardened in Church administrative debates, immediately ducked away behind a large neighbor, but the other one happily raised his arm: ‘Present!’ He then was severely rebuked by elder Ballard, because the Netherlands were the first to legalize same sex marriages and why had he not opposed that piece of legislation? And what was he planning to do to have that law repealed? Luckily, the apostle did not give him much time for an answer, so the chastised Stake President could quietly lick his wounds. In fact, his answers would have been easy, though probably not overly appreciated. The first question, why was there no opposition, could be answered with the counter question why the church leadership never gave any directives in the issue, when it really mattered in Europe. Why only when it played in California, many years later? 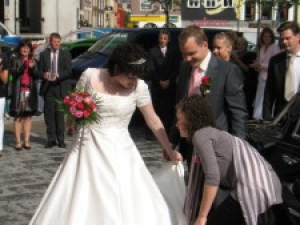 Brides need attention
Some history, as the Netherlands were the first in this global movement. The movement started in the ‘80s, which resulted in a provisional trial in the Court of Amsterdam. Their verdict in 1989 was that the law did not stipulate that marriage was uniquely meant for a man and a woman, but that clearly the legislator meant it that way. The movement continued to gather steam, and in 1994 about a 100 municipalities had opened provisional marriage registers for same sex couples. From 1998 onwards same sex couples could engage in a ‘registered partnership’, a form of ‘marriage light’ that was already available for traditional couples as well. Important as this partnership is in the Netherlands, it was not enough; the notion of equality before the law reigns supreme – as in the US – and from 1 April 2001 two men or two women could legally marry in the Netherlands, for the first time in the world. 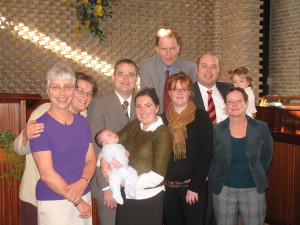 Dutch Mormons are as family oriented as any. The one with the sunspot is the author
Why was there no opposition from the Dutch LDS church? I was stake president when the movement took off, and it simply never occurred to us, for two reasons. First, the minute Dutch LDS contingent would make no difference, and we are used to being a political non-entity. Some Christian churches were opposing the bill, but mainly those churches we did not want to be associated with. The mainline churches did not put up much of a fight either, realizing that this was a race that had been run already. When it came to the actual bill, the Roman Catholic Church had lost all political credibility by the storm of abuse accusations against its clergy. In 2001 over 70% of Dutch population fully agreed with this new liberty; at present it is over 80%. The second reason is that about the same percentage holds for the Dutch Church members: there would never be any ground support for a Dutch church action against the bill. Maybe, if the top leadership would have pressed, some more members would have been willing to rally for this cause, but from Salt Lake there was only a deafening silence. On the whole, the Dutch members reflected the general attitude towards the issue, and most would not have been moved in the opposite direction by any leadership. At prop 8 time I wrote in a published comment on the Time Magazine article mentioned above: ‘It is misleading to ignore church members who do not agree with the action engineered by the church leadership pro proposition 8. Both in the USA and especially in Europe, many faithful LDS are in favor of same sex marriages, at least see no reason why the advantages of legal marriage should be withheld from people with a different sexual orientation.’

The answer to the second question – what are you going to do about it now? – would first repeat that the large majority of Dutch LDS have no issue with this extension of civil rights and diminishing discrimination. But, more important, at the time of Prop 8, and even more today five years later, one thing has become crystal clear: the legalization of same sex marriage has made no difference at all for the marriages in the Netherlands. The impact of the new openness on the marriages between a man and a woman has been absolutely zero. It is simply not an issue, neither in the Netherlands, nor in Belgium, where it was legalized on 13-2-2003 (at long last we beat our southern neighbors in something, if not in football). At present 2% of all contracted legal marriage are same sex, with a slight preponderance in woman-woman, which is nullified by a higher divorce ratio. So 98% of all marriages are traditional in the sense of man x woman. These figures regard civil unions, which are mandatory before any religious celebration. Religious organizations are fully free to solemnize these unions or to refuse same sex marriages in their own ranks; at no point in the discussions has there been any talk of forcing churches to adopt the same ruling. Freedom of religion is inviolate, as is the separation of church and state, as it is in the USA.

Our own territory, not under any threat.
The main dynamics in Dutch marriages are similar to those of the USA: an increase in divorce frequency ( over 1/3 ends in divorce, less than in the USA), a later marriage date (the mean age for the first pregnancy in Netherlands is 29.3 years, higher than in the USA) and more cohabitation contracts as first phase of the marriage. These dynamics do affect marriage as such, but are completely independent of same sex option. After 2001 these trends have continued without any change. (Whether they do form a genuine threat for marriage as an institution is another matter). Taking out same sex marriage as the moral scapegoat of our generation is highly demagogic, and zooms in on latent or overt homophobia to the detriment of basic rights and liberties. When the Baptist minister Albert Mohler Jr. said at BYU on October 21, 2013: ‘The moral revolution we are now witnessing on the issue of homosexuality is without precedent in human history in terms of its scale and velocity,’ he did not fight a real enemy, but like Don Quixote mistook a windmill for a real giant. In this case it seems to be a Dutch windmill, larger than the Spanish version.
Historically such a statement as Mohler’s is nonsense, socially it is void. Sociological theory predicts that when two parties battle over an issue, that issue becomes more important, gaining in stature and symbolic value. That is what is happening with marriage as well. The issue of marriage has never been more at the front of people’s minds than it is now, and the institution of marriage benefits from it. To that extent, the Church exertion on Proposition 8 might have benefited marriage as such, whatever its eventual political (lack of) success. I understand that president Uchtdorf barred any further action such as the church endeavored in favor of proposition 8, and if so the final outcome of the Californian struggle bears him out. On June 26 2013 the Supreme Court in fact nullified the Prop 8 action, and California joined the ranks of the ‘states and nations with marriage liberty’. From the Netherlands we bid California a hearty welcome!

136 comments for “Why same sex marriage is not an attack on the institution of marriage: experiences from Europe”