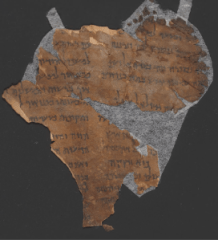 One of the non-Biblical texts from the Dead Sea cache is known as hodayot or the Thanksgiving Scroll or Thanksgiving Hymns  (or 1QHa and 1QHb, for you scroll groupies). It is so named because of the repetition of the line ‘odeka ‘adonai  “I give thanks to You, O Lord…” The scroll is lengthy, nearly thirty columns, and fragments of seven copies have been found. Alas, the text is quite fragmented, and not terribly exciting to read, so I’ll link to Wikipedia instead of the text. While these poems/hymns/psalms “resemble the biblical psalms in many ways, these poems show a development of literary forms and express the theology of the Qumran group. They speak often of the psalmist, suffering, including attacks by Belial’s people, and of God’s grace to him despite his own unworthiness…. [In some of these] the speaker stresses the trials he has endured, God’s grace in saving him from them, and the knowledge revealed to him so that he could teach it to the community.” (The Meaning of the Dead Sea Scrolls, 235.)

The psalmist immediately states his reason for offering thanks by recounting what God has done for him: for example, “because you have placed my soul in the bundle of the living” (1QHa 10:22); “because you have redeemed my soul from the pit” (1QHa 11:20); “for you have illumined my face by your covenant” (1QHa 12:6); “because you have dealt wondrously with dust and mightily with a creature of clay” (1QHa 19:6). Other reasons frequently cited for giving thanks are that God has granted the psalmist knowledge of marvelous mysteries (e.g., 1QHa 12:28–29) and brought him into the community (the ya?ad), giving him fellowship with the elect on earth and with the angels in heaven (e.g., 1QHa 11:23–24). As in the biblical Psalms, the psalmist recounts at length the trials and sufferings that have been inflicted upon him and how he has been delivered by God’s gracious help; betrayal, persecution, and exile as the result of the perfidiousness of his enemies are more common motifs than complaints of physical illness.- Eerdmans Dictionary of Early Judaism, “hodayot” p. 748.

Many of the Biblical Psalms offer thanks to God as well, e.g. Psalm 9:1 “I will give thanks to the LORD with my whole heart; I will tell of all your wonderful deeds” which is why they make such great Thanksgiving songs. Go read (and listen to!) Kristine’s post here with some examples. And so with Kristine, the composers, Nephi (2 Nephi 4), and the various Psalmists, I too offer thanks to God, for the many joys of life, for the harder times that make those joys stand out, and for the promise that through his son we “might have life, and… have it more abundantly.” (John 10:10)