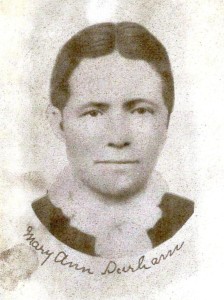 The Mormon conception of marriage is central to our theology and understanding of the next life. We see marriage as the beginning of eternal families, and a key element of eternal progression. Doctrine and Covenants Gospel Doctrine lesson #45 explores this
belief, but, I think, doesn’t quite get at how or why marriage might be so central to eternal life.

The following poem may explain somewhat.

The author is listed as M. Morton, and is likely Mary Ann Morton Durham, known today as the author of the hymn “Sweet is the Peace the Gospel Brings” (#14 in the current LDS hymnal — the composer of the work, Alfred M. Durham, is likely a descendant of her husband by another wife). Both this poem and the hymn were published in the Millennial Star in succeeding years, both were signed M. Morton and listed as written at Luton, along with a handful of other poems and several signed “M. A. Morton”.

Not much is known about the life of Mary Ann Morton. Born in 1829, after marrying, joining the Church and writing poetry for the Millennial Star, she emigrated to Utah in 1856 with her husband, Thomas Durham, and crossed the plains as part of the Martin handcart company. They both survived the ordeal, and settled in Elsinore, Sevier County, Utah, where Mary Ann passed away and is buried. I do not know for sure if the following was written before or after Mary Ann married.

“While He, who rules by heaven’s design, the sceptre mildly sways,
She loves, reveres, with thought sublime, and cheerfully obeys.
Each other’s weal or woe they share, nor know a selfish aim;
They learn to bear, and to forbear, nor e’er unkindly blame.

‘Tis true, a union so divine transcends a mortal’s ken,
Till the pure gospel light refine: faith can discern it then.
This is the power alone can bind on earth, that binds above;
Its precepts pure; its laws refined; its ultimatum, Love!

What I find attractive here is Mary Ann’s conception of marriage as the way we learn true love. She sees marriage as teaching both to overcome selfishness:

Each other’s weal or woe they share, nor know a selfish aim;
They learn to bear, and to forbear, nor e’er unkindly blame.

And to learn unity:

And she sees eternal potential in a strong marriage, “a union so divine” it “transcends a mortal’s ken.”

While I don’t think her views will satisfy most feminists today (1st two lines of the 3rd stanza are problems), still, she does capture, I think, something of the eternal conception of family and marriage. Given that this was either written early in her marriage or perhaps before marriage (and given that her husband married polygamously two other women), I would love to have poetry about marriage from her that was written late in her life. I wonder what, if anything would be different in what she emphasized.