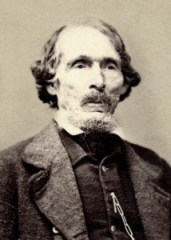 Its been a decade or more since practicing “random acts of kindness” became a kind of fad here in the U.S. I’ve always liked the concept, and I’ve practiced it on occasion. But I don’t think its a substitute for the kind of doing good to others that Lorenzo Snow manual lesson #22 is talking about. While “random acts of kindness” might be a starting point, its no substitute for “mourning with those that mourn” or “comforting those that stand in need of comfort.” Perhaps the difference between the random, transitory nature of the “random acts of kindness” fad and the true care for others spoken of in Mosiah is behind what William W. Phelps is describing in his poem below:

William Wines Phelps was one of the first and most prolific of Mormon poets, although unlike his contemporaries Parley P. Pratt, Eliza R. Snow and John Lyon, Phelps never published a volume of his own poetry. He is also unique because he is likely the author of the only poem, outside of scripture, attributed to Joseph Smith (The Vision, a paraphrase of D&C 76). If I recall correctly, he is still the Mormon author with the most hymns in the current hymnal. This hymn was included in the many LDS hymnals in the 19th century, but was dropped before the current hymnal.

Remember, ye clergy, as eyes to the world,—

Ah ye that pretend you are working for God,

For hundreds a year, in your clerical robes:—

The poor are forgotten at home and abroad:—

Remember—ye christians, in all christendom,

That boast of your tracts, and the aid you afford,

For churches, and Bibles, and missions afar,

But not for a prophet to honor the Lord:

That worship all manner of gods, in your turn,

The world with its hay, wood and stubble, must burn:

That know how your Savior is coming, anon,

To make up his jewels, of purified gold,

From all of the cities of great Babylon:

That walk by the Spirit, and go by command

To gather the guests for the feast of the Lord—

With friends, and with foes, on the sea, or the land,—

The poem is an interesting mix of millenarian ideas, promotion and criticisms of other religions and the way charity is practiced. But along the way there is a lot for us today to consider.

Certainly the criticism of popular charity is still on target. Its true, I think that “The poor are forgotten at home and abroad,” and even Latter-day Saints, with our beliefs and knowledge of the Saviour, and prophetic inspiration, must still “gather the guests for the feat of the Lord.”

Phelps’ poem asks us all to consider how well we remember those less fortunate. Perhaps we don’t boast of our tracts or aid or our far-flung missions, but even if we do, we need to remember the poor. And in the final two stanzas, Phelps makes it clear that Mormons are not excluded from his criticism and plea. Shouldn’t we ask ourselves if we are somehow leaving the poor out of those we are gathering to the feast?

But we need to go still farther. When we get down to the details, it isn’t just a matter of not leaving anyone out. We can’t get along with mere recognition. It is, as we are taught in Mosiah, remembering everything about those who are or should be part of our community. Truly remembering someone is, I think, the same as what Mosiah described. Remembering is mourning with them, it is comforting them, it is going beyond just understanding the poor. It is recognizing that we can’t escape a duty simply because “ye have the poor with you always.”

To really do good to others we must remember the poor.