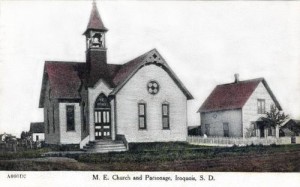 On Thursday, November 21, the district court of the Western District of Wisconsin declared (part of) the parsonage exemption—a special tax provision for certain religious persons—unconstitutional.

What Is the Parsonage Exemption?

To understand the parsonage exemption, we should briefly detour into default tax law. By default, virtually everything you receive from your employer constitutes taxable income, and you are required to pay taxes on it.[fn1] This generally includes housing: for the most part, if your employer provides you with housing, or with a housing stipend, you have to include the rental value of the housing or the amount of the housing stipend in your gross income.

Section 107 of the Code provides a couple exceptions to this general rule. I’ve briefly talked about the parsonage exemption here. In brief, section 107 says that “ministers of the gospel”[fn2] don’t have to include in gross income (a) the rental value of housing provided as compensation, or (b) a rental allowance paid as part of their compensation.

Why Would a Church Provide Housing or a Housing Stipend?

Because it lowers the church’s cost of compensation. Assume, for example, that a minister lives in an area where rent on a 3-bedroom apartment costs $2,000 a month.[fn3] Assume further that the church intends to pay the minister $100,000 a year.[fn4] If the minister is married filing jointly, that puts her in the 25% tax bracket. After taxes, she has $83,142.50 left to spend.[fn5]

So if the church can provide that value on a pre-tax basis, it has to pay significantly less. Specifically, it can pay $68,000 cash and provide an apartment—or it can pay $68,000 cash and, in addition, provide a housing allowance of $24,000—and the minister can enjoy $83,142.50 of after-tax consumption. That is, the church pays, at most, $92,000 (and it could be less if the provision of an apartment doesn’t cost the church $24,000) for the minister to live on the after-tax equivalent of a $100,000 pre-tax income. The parsonage exemption, then, functions economically as a subsidy to churches that employ and provide housing for their minister or minister-equivalent.

So What’s the Problem?

In short, this is a tax benefit provided solely to religious persons. As such, plaintiffs allege, the parsonage exemption violates the Establishment Clause of the First Amendment.

Judge Crabb agreed. While acknowledging that religious organizations can constitutionally receive tax benefits, the judge noted that tax provisions that solely benefit religious organizations violate the Establishment Clause. It’s worth noting, though, that all of the violative provisions she cited were provisions of state tax law; I’m not aware of any provision of the Internal Revenue Code (up until now) that has been struck down as violating the Establishment Clause.

Note that I think she’s right: the parsonage exemption doesn’t make any tax policy sense. It reads as a purely political move; someday, maybe, I’ll look at the legislative history (some of which is cited in the opinion) but, even if it had non-political genesis, it doesn’t appear to have any purpose today, except as a giveaway to religious institutions that hire and house their clergy.

So Is That It? Can the Decision Be Challenged?

I think, on the merits, the decision is pretty sound. But I don’t think the case itself is bulletproof. Specifically, I think the has some procedural problems. (I’m not a procedure person, though: if anybody who knows a lot about Article III standing wants to chime in, that would be great.)

Basically, the parties suing—two employees of Freedom From Religion Foundation and the Foundation itself—never tried to claim the parsonage exemption. Usually in the world of tax litigation, a litigant has to make a claim to the I.R.S. and have that claim rejected before she can sue. Here, Judge Crabb said that doing so could create a catch-22: if the provision were declared unconstitutional, the taxpayers wouldn’t be able to receive the benefit, so their complaint could not be redressed.

But I’m not entirely convinced that this catch-22 overcomes (or meets) Article III standing. If I represented the government, I’d appeal the case alleging that the plaintiffs had no standing to sue, and therefore the court couldn’t hear the challenge, much less declare section 107(2) unconstitutional.

Like I said, though, I don’t know the intricacies of civil procedure. Still, it feels like a stretch to assert that the plaintiffs had standing to bring this case.

Nothing. At least, not for now. Judge Crabb told the I.R.S. that it could no longer enforce section 107(2). But she also delayed her holding until after the conclusion of any appeals. What’s more, even if the Court of Appeals holds it unconstitutional, that holding will only apply in the states covered by the Seventh Circuit.[fn6]

If the Seventh Circuit doesn’t dismiss the case on standing grounds, I suspect it will hold that section 107(2) violates the Establishment Clause. From there? It probably ends up at the Supreme Court.

If a church provides a housing stipend to its minister, but is worried that section 107(2) will inevitably be declared unconstitutional and wants to get ahead of the inevitability, it could always rent a home for its minister directly. Going with the example above, instead of paying a housing stipend of $2,000 a month, the church could use that $2,000 to rent an apartment for the minister. In the current world, the minister should be indifferent between the two and, in a world where the stipend is taxable but the church-provided housing is not, should actually prefer the direct provision from the church.[fn7] And the church should be entirely indifferent as to whether it gives the money to the minister or the landlord.

Is There Any Particular Mormon Consequence to This Case?

I don’t actually know. But I would imagine there is: certain Church leaders (e.g., the prophet, First Presidency, and Quorum of the Twelve, at least) receive compensation from the Church. They almost certainly qualify as “ministers of the gospel” for tax purposes; if a portion of their compensation isn’t designated as a parsonage allowance (or, alternatively, if the Church doesn’t provide them with housing), somebody’s not doing his or her job very well.

Cross-posted to What We Pay For Civilized Society. [h/t Marc.]

[fn1] There are, of course, some exceptions. For example, the Internal Revenue Code provides that certain fringe benefits don’t need to be included in an employees gross income. But these exceptions are explicitly laid out and are generally fairly narrow. It’s worth noting that, while gifts generally are excluded from gross income, it’s virtually impossible for an employer to give an employee a tax-free gift.

[fn3 I’m using $2,000 mostly because it makes the math easy. But here in Chicago, that’s probably a reasonable (and possibly a low) estimate).

[fn5] Note that I’m ignoring the standard deduction, personal exemptions, and other deductions for the sake of simplicity.

[fn6] That is, Wisconsin, Illinois, and Indiana.

[fn7] Okay, that’s not entirely true. A minister can currently apply the stipend toward her monthly mortgage payment; without section 107(2), the minister would have to make her mortgage payment out of after-tax dollars.

22 comments for “Money for Nothing and the Housing for Free”