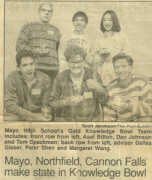 Played soccer and ran track, but I only lettered in Knowledge Bowl. First in State, in the written round.

I was always somewhat bookish, even before my mission.

It began in my first city, Strasbourg. We encountered a guy who, as I recall, asked kindly “how do you think you can tell everyone else they’re wrong when you barely know anything about your own tradition, let alone all the others?” (Edit: On further reflection, I think he was Muslim.) While I’d respond differently today, it made an impression at the time. I felt deeply and vulnerably ignorant, and was inspired to start learning just to make that feeling go away. I started digging into the huge backlog of Ensign and The Instructor in the local Church library. (My memorization of the discussions got seriously bogged down after the second, since we rarely taught beyond that anyway.) I learned that the mission office would order books for us through Church distribution and the Deseret Book catalog. After looking through them, I ordered copies of all the Institute manuals, Teachings of the Prophet Joseph Smith, and Gospel Doctrine by Joseph F. Smith. I had already read through the prescribed missionary library of Jesus the Christ and such, so new material was needed. During my required study time, I read the Book of Mormon and New Testament in French, following along with the Institute manuals, marking up and taking extensive notes.

In my second city, I met Elder Winn who seemed to know many things about history and doctrine. In retrospect, I don’t think he knew that much. He had probably read 2-3 books whereas most missionaries had read none. But he had a copy of Mormon Doctrine which I borrowed and read cover to cover. I definitely raised my eyebrows a few times (“dragons” are simply memories of pre-flood dinosaurs? What?), but found its breadth and depth inspiring.

Mulhouse, and the Chicago Temple-style fountain, outside our apartment.

My third city, Mulhouse, was a real turning point. I’d been through the New Testament entirely in French and the KJV, the Book of Mormon a few times, and read all my other books. I also encountered Christophe, who had gone to BYU, and taught German, French, and English professionally, as well as volunteer Institute. A friendly guy with an overweight cat named Tummy, Christophe introduced me to… the FARMS Catalogue. Although little more than a four-page listing of titles and authors on yellow-brown paper, those titles tantalized me. I ordered several things.  And then again. Book of Mormon Authorship and Book of Mormon Authorship Revisited, Offenders for a Word, Rediscovering the Book of Mormon,  Hugh Nibley volumes on the Book of Mormon, Temple, and Early Christianity, a copy of John Welch’s “Greek New Testament Word Studies” (partially published in the Ensign and expanded elsewhere)…. My Mom sent me a copy of President Hinckley’s biography, notable for its non-hagiographic approach. 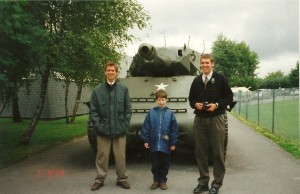 “Do the members support you, Elder Spackman?”
“… they back us up.” A visit to Bastogne.

I read scripture during study time, and other books at meals, before bed, and on the train/bus when no one was around, and sometimes when they were.  I ended up with a very uneven library of nearly 50 books, notable since they all had to be shipped from the US, heavily oriented towards scripture, history, and

Liège, and its “famous” baptismal font on oxen. Yes, that’s a copy of The Great Apostasy I’m holding

apologetics. One thing that stood out repeatedly was languages. Greek word studies, Hugh Nibley’s command of languages I’d never heard of, differences between the KJV and Louis Segond Bible, and the totally unexplained presence of Hebrew letters at random spots in Psalm 119 of our KJV (really, look it up!) made me very aware of the power of language both to confuse and enlighten, as well as the limitations of English-only study. I wanted to master them. In retrospect  very unusual for a missionary, I read the entire Bescherelle grammar volume, which got me out of the French re-entry class for missionaries at BYU, I read out loud with lovely Parisian-accent language tapes of the Book of Mormon, bought a modern Greek language tourist book, and started trying to learn the Hebrew alphabet from Psalm 119. I also picked up a Spanish-in-15-minutes-a-day book to play with, and an illustrated book about writing Mandarin characters. Each time I finished the Book of Mormon or New Testament, I’d write the date inside the front cover and start over. I also did a highly selective read of the Old Testament and D&C with the Institute manuals, but found more profit and relevance in the other standard works. Meanwhile, the boats kept bringing books. Reading kept me sane, and the knowledge was useful and even, well, somewhat prestigious among missionaries. I felt like the proverbial one-eyed man among the blind. 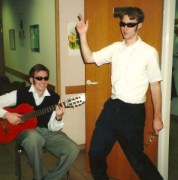 A moment of levity in Nancy. One of the departing YSA was an Elvis fan.

At the one year mark, something happened. My first mission president departed, and a new one arrived, with a significant history I knew nothing about. Let us back up about several decades, to France in the late 1950s.

A highly successful and charismatic missionary goes off course a bit, then a lot, then starts recruiting other missionaries as disciples, all in secret. They begin tracting only a little, but studying 12 hours a day, and not the normal stuff either: History of the Church, RLDS proselytizing material, Fundamentalist polygamy material, Adam-God material. They start wearing old-style ankle-wrist garments, and considering polygamy, going much further than the typical baseless late-night speculation of most companionships. The ringleader’s SOP with a new companion was to test the waters and see how he responded. As various General Authorities and the mission president began to suspect something amiss, an Elder Ray Hart arrived in the mission and was assigned to an Elder Tucker as trainer. Within a month, Elder Tucker would be unveiled as the ringleader, sent home, and excommunicated for Apostasy along with several other Elders and Sisters, the result of excessive study of seriously unapproved material.   (See part 1 and part 2 for the full story from Dialogue.)

In light of President Hart’s affirmation of mission policy to limit our study materials (which had been fairly loose to that point), I asked him during our first meeting what I should do with all my books. I told him I’d acquired a library of about fifty volumes, on history, scripture, French language, and had more on the way.  I offered to box them up and leave them in the office if necessary, but expressed a desire to keep studying. He inquired as to my study and proselytizing habits and after reflecting for a bit counseled me to keep them and keep reading, as long as it didn’t take away from my work time.  Years later, in the BYU library, I was shocked to recognize my MP’s name in the story of the French mission apostasy. In light of his personal experience with Elder Tucker, I’ve gained more respect, gratitude, and even a measure of surprise at President Hart’s decision to allow me to continue as I had been, but it proved formative.

I kept reading and studying, determined to get a good grasp on the Bible. Having lost my prestigious (and somewhat accidentally acquired) University Club scholarship at Utah State, and wanting to attend the BYU Jerusalem Center (another mission buddy had attended and told me about the experience), I transferred to BYU, where I eventually became a Near Eastern Studies major. I attended the Jerusalem Center. I planned on applying to medical school, but my semester of organic chemistry combined with the growing pull of Hebrew and the Old Testament convinced me otherwise. Off to the University of Chicago I went for a MA/PhD, and you all know how that turned out. Just as the effects of the old mission apostasy reverberated through France for decades (I served in some of the same areas), the effects of my MP’s decision also have done so. I blog, teach, publish. I hope my writing and teaching will affect many people for good.  I have high hopes, anyway.

Herstal. My last apartment, and one of Elder Tucker’s area as well.

My mission converted me in many ways. I was converted to Christ, to scripture, to study and scholarship. Passing interest in languages became a passion. Previous disdain for history, Europe, French cheese, and Near Eastern studies became serious interests, loves, and, I hoped, professions. Was it the best two years? Nowhere near as good the years following. Was it the most formative two years? Unquestionably.

28 comments for “On Missions, Books, and Seriously Going Off the Deep End, Plus a Paean to my Second MP (U: Now with pics)”