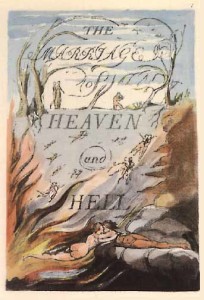 The study of management—of human beings going about their ordinary business of making a living—is one of the richest and most profound venues for the study of theology. Once you’ve considered the idea, it seems obvious.

But of course, most of us don’t consider that idea. I never did, until very recently. What could be more antithetical to spiritual reality than the world of business? Even if I thought Hugh Nibley’s critiques on business were a disappointingly infantile digression from an otherwise heroic figure, the idea that the world of mammon could actually be a source of spiritual insight (other than as a temptation to be denied or a trial to be endured, of course) never entered my mind.

But why shouldn’t it? If we are to take seriously the theology of the mundane, and that is something I believe we should take seriously, and locate insight and meaning in pedestrian and everyday human activities, then why would we except the realm of business and commerce?

Management always lives, works, and practices in and for an institution, which is a human community held together by the bond that, next to the tie of family, is the most powerful human bond: the work bond. And precisely because the object of management is a human community held together by the work bond for a common purpose, management always deals with the Nature of Man, and (as all of us with any practical experience learned) with Good and Evil as well. I have learned more theology as a practicing management consultant than I did when I taught religion. – Peter Drucker

I was first introduced to the conflux of Drucker, Nibley, and theology in a post by MBA student Walker Wright critiquing Nibley’s (in)famous Leader to Managers. In it, Wright rejects Nibley’s leaders vs. managers dichotomy as a false choice. Quoting Harvard Kennedy School’s Barbara Kellerman, he notes:

Scholars should remind us that leadership is not a moral concept. Leaders are like the rest of us: trustworthy and deceitful, cowardly and brave, greedy and generous. To assume all good leaders are good people is to be willfully blind to the reality of the human condition.

Wright goes on to argue that the myth of the heroic leader, a grand visionary untrammeled by pesky minutia, functions for the most part as an excuse to avoid real work. In contrast, Wright argues that we must embrace the mundane in the pursuit of the lofty: “Zion as a vague, lofty abstraction sounds good on paper (or in scripture), but the steps that must be taken to transform it into a reality are something else entirely.” As a corollary, Wright also argues for a broadening of the term “intellectual” beyond the scope of “New-York-Times-reading-complexity-craving-literature-philosophy-and-history-reading-liberals-like-me-and-you,” using Joanna Brooks’ characterization. As Wright points out: “those who practice medicine, law, and business tend to be highly intelligent and (often out of professional necessity) curious.”

This is the context in which Wright introduced me to Peter Drucker as more than just a particularly influential management consultant. Peter Drucker saw himself, in contrast to progressive, scientific theorists of the previous generation, as a humanist. He was the consummate interdisciplinarian and never lost sight of the worker and manager as human beings rather than merely resources. He was, in simple terms, the ideal anti-Nibleyian manager. 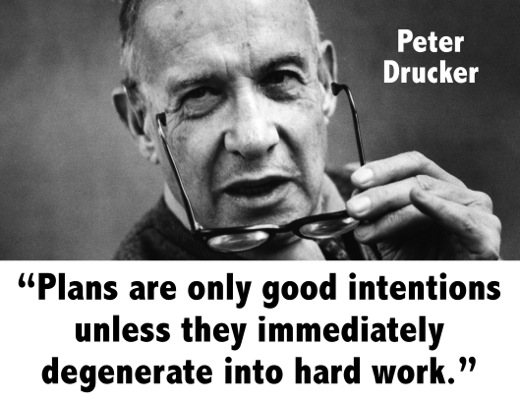 Wright pushed this topic further in two subsequent posts coauthored with Allen Hansen, All Things Unto Me Are Spiritual and The Upward Path. The first is a fascinating historical comparison of worship through corporeality in Hasidism and Mormonism, centering especially on Enoch’s pursuit of holiness through his commercial trade as a shoemaker. According to R. Israel’s explanation of Enoch’s story:

This does not mean that when Enoch sewed together shoes he was cleaving to supernal thoughts. The law forbids it, for how can he be occupied with something else when he is employed on behalf of other people? Rather, the essence of his unifications was the concern that each and every stitch would be good and strong in order for people to benefit from the shoes. Thus he cleaved to the attribute of his maker who bestows his beneficence on all, and this is how he performed unifications, desiring nothing other than to cleave to the attributes of his maker.

If the first post touches glancingly on the connection between business and theology, the second delves in deeply. After all, one cannot engage in a study of the role of the mundane in spiritual life without doing so. As Wright and Hansen put it: “People do not spend the majority of their time in the act of deep contemplation. Instead, they are performing the seemingly menial tasks of daily life. This largely consists of one’s form of employment.”

Wright and Hansen subsequently weave together threads from Hasidism, positive psychology, and human resources literature to build a picture of eternal progression as  a practical, everyday activity. They conclude:

The Church is an organization. Human life is experienced within organizations, communities, and societies. By delving into the meaningful aspects of this life, we can begin to catch of glimpse of the next. By doing so, we can help bridge the gap between the secular and the religious, the Church and the Gospel, the temporal and the spiritual, knowing and doing, believing and belonging. By practicing “worship through corporeality” in all its forms (including in the workplace), we can perhaps become part of something bigger than ourselves, instill the hum-drum of daily life with greater meaning, and re-enchant “disenchanted Mormonism” (to borrow Rosalynde Welch’s wonderful term) while grounding “enchanted” Mormonism in reality. 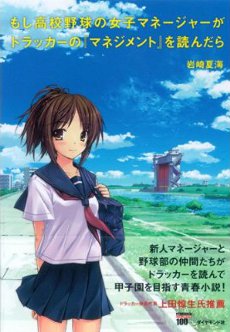 Wright has already written additional pieces that demonstrate the exciting scope of this research agenda. In Spiritually Edifying and Psychologically Satisfying, Wright examines the integration of Gospel narratives into our life experiences while drawing on neuromarketing research. In The Sometimes Sandy Soil of Doubt & Uncertainty he reviews President Uchtdorf’s recent General Conference talk in light of the role of humility in effective business leadership. And in Moshidora and the Progress Principle he examines a popular Japanese anime with the premise of a high school baseball team manager who applies Peter Drucker’s principles to visit the idea of eternal progression once more.

Mormon doctrine holds that the Fall, rather than a tragic catastrophe, was a great and costly leap forward. We believe that our mortal bodies are a higher form of being rather than a fall from spiritual purity. Mormon monism collapses the distance between spiritual and physical, violating the ancient tenet of sacred distance and thereby threatening the spiritual realm (in the eyes of some) while ennobling the physical. And yet it seems the Mormons are still inheritors in many ways of the conventional Christian distrust of the temporal, the physical, and the earthly. If Zion is to be built on this Earth, however, that tradition of the fathers must be set aside. That is what strikes me as worthy of celebration in these posts: an opportunity to at long last lay down the burden of anti-biological self-loathing and more fully embrace the lessons to be learned from our ordinary lived experiences. I hope to see lots more in the future from Walker Wright, Allen Hansen and others.

Note: Largely because of how impressed I was with the posts discussed here, I subsequently asked Wright to join as a regular contributor to my personal blog. Allen Hansen suggested the title and illustration for this post.

20 comments for “The Marriage of Heaven and Hell: Business and Theology”