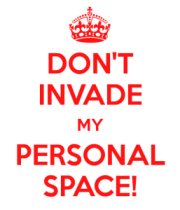 We were headed to the car. As we left the building, my wife slid her arm in mine, in part because the sidewalk was still slick after the snowstorm earlier in the week. And when we reached the curb and waited for the light to cross the street, my personal space was invaded.

We live in New York City. Personal space is often an issue. On the bus or in the subway you can travel to your destination without saying a word, or communicating in any way, to the person next to you. Its respect, really–treating the other as we would like to be treated. No one wants to be interrupted from their book or music or whatever, so we don’t infringe on each other. Its really the same thing that many people experience on airplanes today.

New York’s sidewalks are also full of people, unlike most places I’ve seen around the U.S. I usually can’t go a block without passing at least a dozen people, and many times more than that. So its natural to try to stay out of the way of others. And you don’t really greet anyone on the street, unless you know them. [In contrast, my NYC-raised son, when he first lived in Provo, was exhausted and confused by all those he didn’t know who would greet him on the street. Nor did he realize initially that store employees who asked “how may I help you” didn’t mean “I’ve got my eye on you, so don’t try to steal anything.”]

So when I felt someone touch my other arm (opposite from my wife), I naturally moved aside to get out of the way, and looked back to find a small, elderly lady there. To my surprise she grabbed the inside of my elbow–and I realized she needed help crossing the street, just as my wife and I were about to do.

The light turned green, and the three of us made our way across the street. Reaching the other side, the lady dropped my arm and went on her way, while my wife and I went on down the street to our car.

Issues of personal space are, of course, cultural. How close we allow someone to get is heavily influenced by the norms of the local society. Given our neighborhood in New York, I’m amazed at this woman’s courage. She must have really felt like she needed the help to violate the norms. No doubt, the fact that my wife was on my other arm helped–I don’t know if she would have assumed that I would be ok with helping her without it.

I know this is a simple thing. My wife and I certainly weren’t inconvenienced in any way. I’d happily do the same again, as I’m sure most people would. Its a simple, easy courtesy–part of what we should do as human beings. We are meant to walk arm in arm with others.

What I find interesting is what this small act says about our culture and helping others. In most cultures in the West, and especially in the U.S., there are powerful norms against asking for help. Reaching out and assuming that we will be helped or asking for help requires courage because those who do so are violating social norms. Our culture clearly teaches says that inconveniencing others is wrong. You don’t take an arm unless it is offered.

This prohibition against inconveniencing others is the same reason many people feel annoyed when asked for help–a social norm has been violated. I don’t know about you, but this is something I need to work on–how to react when my personal space is violated by those seeking help.

But there is another aspect to this beyond just reacting well. The elderly lady who assumed my help did so because, with my wife on my other arm I looked like I would help. Without my wife there, or if I had been dressed differently, or if I had been walking as quickly as I normally walk, she may not have sought help from me. Being open to help means we need to be available, and look like we are willing.

I think that’s something we need to think about. How do we appear willing to help? That also must be based on local culture. It likely has to do with how we carry ourselves, our gait and aspect. It has to do with what we say in public, how we express our opinions. And it probably has to do with what we wear. Perhaps true modesty in both dress and action–i.e., not extreme, neither rich nor poor, neither outlandish nor dull–might be the best way to appear open.

I think that there is something here connected to “true religion.” To successfully help we need to both be willing to help (even if our space has been violated) and appear to be someone who will help. We need to be both willing to extend our arms and be available to do so. And if we need help, we need to have the courage to ask for a hand or arm, and even, when it can be done correctly, assume that others will help, and grab on to their arm, if it isn’t too intrusive–because some who should give need a little push.

What I am certain of is that we are meant to help each other. Salvation isn’t just an individual task–its a communitarian one. We are meant to progress arm in arm.

7 comments for “Arm in Arm”