The changes at the Gospel Topics section of LDS.org (which I wrote about two weeks ago) and especially the Church’s new Race and the Priesthood article have rekindled questions about the fallibility of Church leaders. After all, the Church’s current position completely disavows the past practice of denying the priesthood to blacks and all but explicitly states that the practice was an error from the start. Chalk it up with Adam-God and blood atonement and poor Brother Brigham seems to be batting 0.000 at theological innovation. It’s difficult to reconcile such grave errors with the statement, canonized in Official Declaration 1, that “The Lord will never permit me or any other man who stands as President of this Church to lead you astray.”

It’s possible that President Woodruff had in mind an even more grave contravention of God’s plan when he spoke and so is still correct, baseless priesthood ban notwithstanding. But if institutionalized racism is not “astray”, then what is? The simpler solution is that he was mistaken.

I don’t think that suggestion should come as a mighty shock. The Book of Mormon (also canon, after all) specifically talks about its own mistakes in, eg, the title page (“if there are faults they are the mistakes of men”), Alma (“but behold, I mistake”), and 3 Nephi (“if there was no mistake made by this man in the reckoning of our time”). Just as no book in the Bible claims that the Bible is inerrant, no work in the broader Mormon canon claims that the canon is inerrant either, with the possible exception of the Woodruff statement in question.

I believe that this is a feature rather than a bug. One of the great lessons of 1 Nephi is the vital importance of establishing our own independent testimony of the things we embrace as true. In chapter 11, Nephi tells the Spirit “I desire to behold the things which my father saw,” and the Spirit replies, “Believest thou that thy father saw the tree of which he hath spoken?” In other words: your father already saw. And told you what he saw. Don’t you believe him? Why do you also seek to see?

This skeptical take echoes the infamous statement that “When our leaders speak, the thinking has been done.” Perhaps less well known is President George Albert Smith’s response to that statement: “Even to imply that members of the Church are not to do their own thinking is grossly to misrepresent the true ideal of the Church.” 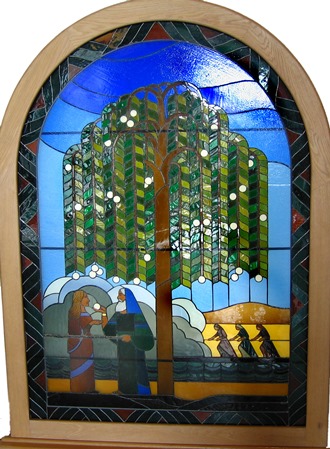 Nephi saw the Tree of Life only because he believed, but was not satisfied.

Just so in 1 Nephi, the Spirit exemplified the true ideal of the Church. Nephi says, “Yea, thou knowest that I believe all the words of my father.” He does not retract his desire to see the vision his father saw. He wants his own experience, and the Spirit reacts by shouting “Hosanna to the Lord,” and then stating that Nephi is blessed, impertinent request and all. Perhaps the reason for the Spirit’s initial push-back of Nephi’s request was precisely to underscore the importance of that request’s validity.

This “true ideal of the Church” exists in tension with the Church’s institutional hierarchy and emphasis on obedience, but is not incompatible with them. As Section 121 makes very clear, the Church’s view of authority is diametrically opposed to the world’s view.

We have learned by sad experience that it is the nature and disposition of almost all men, as soon as they get a little authority, as they suppose, they will immediately begin to exercise unrighteous dominion.

Any other institution with a leadership hierarchy like the Church’s would be rife with coercion, but the Church need not be since, as verse 41 states: “No power or influence can or ought to be maintained by virtue of the priesthood.” The final verse (46) reiterates this point by stating that dominion shall flow “without compulsory means”. Note: this isn’t to say that the Church is devoid of coercion and unrighteous dominion. Clearly, it is not. It merely locates the cause of those failings with universal human nature rather than particular institutional design.

There ought to be no compulsion from leaders over members just as God exercises no compulsion over His wayward, recalcitrant, and rebellious children. Christ won His throne by descending below all things, not by running roughshod over them. The message of the Book of Mormon is that we are free. This is because freedom is a necessary prerequisite to inculcating attributes of godliness like independence. Compulsion from our leaders counters God’s plan.

So would inerrant leaders or inerrant scripture. Not because they would coerce us, of course, but because they would provide opportunities for members to coast without personal involvement and risk. It’s a different threat to our freedom–complacency rather than subjugation—but with the same ultimate consequence.

Oddly enough, however, the common thread that unites the arguments from the self-identified faithful and questioning members is the rejection of this reality. Some wish they could depend on inerrant leaders or inerrant scripture because this would make religious life easier. It’s like subcontracting for spirituality: forget building on a rock or on sand, pay someone else to build the house for you! Much easier. Other have realized that they cannot, and seem filled with bitterness and resentment that the easy path has been closed to them. They do not realize that it was a dead end all along. In this case the grapes really are bitter. They are poison, in fact. We ought not to mourn the fact that inerrant leaders and scripture are out of our grasp, but rather praise God that they are so. Every one of us has to ultimately walk by the light of our own faith. This can only be true in a world where leaders of the Church make real and genuine mistakes. Where they are fallible not just in name, but in tragic actuality. This is not an excuse to be disobedient, but a deeper understanding of the cost and nature of our obedience, which is required in general but can never be thoughtless or unconditional.

This means that not only must they be errant, but that it’s counterproductive to try and put some kind of boundary on the allowable degree of error. I presume that should the 12 Apostles start breaking bad and cooking meth that would probably cross some kind of line, but the effort of trying to establish the precise location of that line is not just futile, but folly. A precisely demarcated tolerance of error is functionally the same thing as inerrancy in that it creates an excuse to divest ourselves of responsibility. If we say “Well, OK, but they won’t make mistakes this bad,” it’s just a way of trying to claw back most of the sense of safe dependence that errors in leaders and scripture divinely deny us. This is not to suggest that God causes specific errors. It simply explains why through inaction He allows them to take place. So that we can never fall back on “just following orders”.

I believe that one reason this topic tends to provoke such strong feelings is that it is such a tragic one. I can certainly remember a time when my faith was much more black-and-white, and when I thought that the scriptures and leaders were, in practice at least, inerrant. As a teenager I tried to come up with my own justifications for the old priesthood ban. I wanted to preserve the happy and safe fantasy where I could rely on the Church—it’s scriptures and leaders—and never be disappointed.

The process of learning to let go of this false belief consisted of a series of independently painful and confusing episodes (nothing spectacular or unusual) and the culminated abandonment of my childish dependence left a hole in me that I still probe from time to time like a lost tooth. It turns out that my safety net was never more than a mirage, but it felt real and therefore so too does the loss.

And so I will admit that the frustration expressed by members at the mistakes (real or perceived) of our leaders causes a frustrated reaction in myself: “Let it go!” I want to shout. Because I have. And because it hurt. And because I still miss the clarity of a child’s faith.

← My Beef with Goals
Update: Nominations for 2013 Mormon of the Year →

78 comments for “Leaders are Fallible (No, Really)”