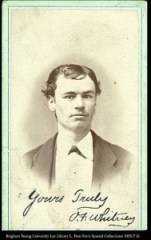 The second lesson in the Joseph Fielding Smith manual, used in Priesthood and Relief Society lessons in the coming year, discusses the life of Jesus Christ and his role in the plan of salvation; quite a lot to cover in a single lesson. In the texts included, Smith ranges from Christ’s birth as the only begotten son of God, to his role establishing a pattern for us to follow, to how we are His sons and daughters through the atonement and through our obedience to His teachings.

Fortunately, Mormon poetry, like our teachings, emphasize the role of Christ, making it relatively easy to find poetry that covers similar territory, like the following text, once a hymn included in LDS songbooks.

Its author is Orson F. Whitney, an Apostle who served during the first half of the 20th century and a strong proponent of Mormon literature. Born in 1855, Whitney worked as a politician, journalist, poet, historian and academic. He was a journalist for the Deseret News in 1878, edited the Millennial Star while serving a mission in Europe in 1881 and taught English at Brigham Young College in Logan in 1896. In 1899 he was called as Assistant Church Historian, serving in that position until his call to the Quorum of the Twelve in 1906. In 1888 Whitney, then serving as a Bishop, gave his “Home Literature” talk, widely credited with transforming Mormon literature1 Whitney wrote several hymns currently in our hymnal, and the epic poem Elias. He died in 1931.

A Stranger Star O’er Bethlehem
Shot down its silver ray,
Where, cradled in a manger’s fold,
A sleeping infant lay
And guided by that finger bright,
The Orient sages bring
Rare gifts of myrrh and frankincense,
To hail the new born King.

He wandered thro’ the faithless world,
A Prince in shepherd’s guise;
He called His scattered flock, but few
The voice would recognize
For minds upborne by hollow pride,
Or dimmed by sordid lust,
Ne’er look for kings in beggar’s garb—
For diamonds in the dust.

He wept o’er doomed Jerusalem,
Her temple, walls and tow’rs;
O’er palaces where recreant priests
Usurped unhallowed pow’rs;
“I am the Way of Life and Light”
Alas! ’twas heeded not—
Ignored Salvation’s message, spurned
The wondrous truths He taught.

On Calv’ry’s hill they crucified
The God whom world’s adore.
‘Father, forgive them!’ drained the dregs—
Immanuel was no more.
No more where thunders shook the earth,
Where lightnings thwart the gloom,
Saw that unconquered Spirit spurn
The shackles of the tomb.

Far flashing on its wings of light—
A falchion from its sheath—
It cleft the realms of darkness and
Dissolved the bands of death.
Hell’s dungeon burst! wide open swung
The everlasting bars,
Whereby the ransomed soul shall win
Those heights beyond the stars.

Unlike so many poems and hymns about Christ, this work attempts to cover his entire earthly life and purpose, tying together both his birth, the later atonement and crucifixion, and his resurrection. As such, I think it works well as a complement to Smith’s expositions on Christ found in the lesson.

As published in the Juvenile Instructor, the above was a hymn, set to music by E. F. Parry, which continued in LDS Hymnals at least until after Whitney’s death. [I suspect it was dropped because Whitney’s language uses generally unfamiliar vocabulary, such as “falchion” and “recreant”]. Along with Far, Far Away on Judea’s Plains, it is one of the few Mormon Christmas songs.

← Literary OTGD #02: Shadows and Whisperings
My Beef with Goals →