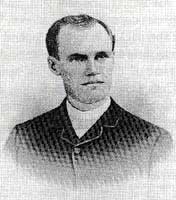 Finding Mormon poetry that talks about Christ is not hard at all. In fact, of all the Mormon poetry that I’ve read (considering only poems written by Mormon authors), the number of poems about Christ surpasses by far the number of poems about any other single individual. If this is a good proxy for what Mormons believe, then there is no doubt: Mormons worship Christ, not Joseph Smith.

But the final Lorenzo Snow lesson for the year focuses on the mission of Christ, mentioning also that he has visited the earth in the latter-days and will come again. That particular mix of ideas is actually quite difficult to find in Mormon poetry (or at least in what I’ve collected so far). The following poem is nice, and its short, and actually does mention many (but not all) of the ideas in the lesson.

Its author is Evan Stephens, best known as a composer and the first full-time director of the Mormon Tabernacle Choir. Born in Wales in 1854, he immigrated to Utah with his parents at the age of 12, and eventually studied at the University of Utah. By 1885 he was directing the teaching of music there, and in 1890 he was named the director of the Mormon Tabernacle Choir. That position was upgraded to full-time in 1895, and Stephens continued directing the Choir until 1916, expanding it from 125 to 300 voices. In addition, he wrote hymns. The 1927 LDS hymnal (from which this poem was taken) included no less than 84 of his hymns (we have just 19 in the hymnal today). He died in 1930.

Christ is Born, the Joyful Story

Christ is born, the joyful story
Spreads from heaven o’er the earth,
Prince of Peace and King of Glory
On the earth has mortal birth.
Christ is born, and heav’n rejoices,
Lo! the world, redeem’d from sin!
Joyful sing angelic voices,
Peace on earth is ushered in.

Christ shall come again in glory,
Here to reign as King of kings;
Wars shall cease and conflicts gory,
Never more shall sorrows bring.
He shall reign o’er death triumphant,
Reign in justice, bonds release.
Worship, worship, Christ the Infant,
Christ the Lord, the “Prince of Peace.”

The mission of Christ that comes out of this poem is similar, I think, to what Lorenzo Snow says in the quotes in the manual. In the poem Christ is the “Prince of Peace” and because of Christ “Peace on earth is ushered in.” And, the Christ that Stephens describes will “come again in glory.”

I’m not sure that this hymn adds anything new to our understanding of Christ, but it is still a very nice, worshipful description of what we think of our Savior. I wouldn’t mind seeing it back in the hymnal.