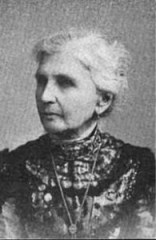 Mormon beliefs about the pre-existence are an important part of our understanding of our purpose in this life and the meaning of the life to come. The beliefs covered in the second lesson in the Old Testament Gospel Doctrine manual, “fore-ordination” and the “war in heaven,” are no exception. But, it is also worth remembering that what happened in the pre-existence is veiled from our memories. The details most relevant to individuals are something we don’t know. Our own specific missions aren’t clear. We are left with “shadows and whisperings.”

But, as the author of today’s poem, Emmeline B. Wells, recounts, these “shadows and whisperings” are themselves a sort of evidence of the pre-existence.

Like her better known predecessor, Eliza R. Snow, Wells was an accomplished poet and author. She was also tremendously active in Mormon Utah, serving as the second editor of the Woman’s Exponent, taking over soon after it was founded and running it until it was replaced by the Relief Society Magazine. She also ran the Relief Society’s grain storage program (a predecessor of today’s Welfare program) from 1875, and served as a voice for the woman’s suffrage movement in Utah. She began her service as president of the Relief Society in 1910, at age 82. She died three weeks after she was released in 1921 at age 93.

by Emmeline B. Wells

A faint, soft shadow flits across my mind,

And thrills me with a gentle tenderness;

A trace, perchance, of vanished happiness;

I try to call it up, but cannot tell,
And yet ’tis something, I have known full well.

My thoughts go back to places where I’ve strolled,

And gaze into the faces known in youth,

And wander round the scenes so dear of old,

To seek this vision out, and find its truth;

Alas, I search in vain, each much loved spot,
It still eludes me, still I find it not.

It often cheers me in my saddest hours,

And if in doubt my feelings wildly stray,

I feel most strongly then, its charmed powers,

Gently it comes, and whispers, “peace be still,”
O, doubting heart, abide “the Father’s” will.

Oh bliss of heaven on earth, we may not know,

For dusky fall the shadows of to-morrow;

Whate’er the talisman, for sin or woe,

Life’s cup is tarnished with a silent sorrow,

But we shall know when this poor life is past,
The secret of the shadows that are cast.

I sometimes think I must have lived before,

In a much brighter, fairer world than this;

That I have stepped from that enchanted shore,

As though I woke from out a dream of bliss,

Where soft hands lingered in a fond caress
Upon my head, to soothe me and to bless.

As if a shadowing of recompense

Had followed me from out that home afar

For in my heart remains a partial sense

Of a bright realm with golden “gates ajar,”

And through the portals of the glorious way,
Perhaps there streams to earth a heavenly ray.

Should seem to mock us, with half-confidence;

Puzzling us with their distant whisperings,

The music of an unknown utterance,

That yearning, human hearts must ever feel
Longing for knowledge, that will all reveal.

… soft hands lingered in a fond caress
Upon my head, to soothe me and to bless.

be if such a blessing made no difference in our lives? Wells suggests as much:

As if a shadowing of recompense

Had followed me from out that home afar

For in my heart remains a partial sense

Of a bright realm with golden “gates ajar,”

And through the portals of the glorious way,
Perhaps there streams to earth a heavenly ray.

And if so, then these “shadows and whisperings” may provide us with evidence, even if they do “seem to mock us” with

That yearning, human hearts must ever feel
Longing for knowledge, that will all reveal.