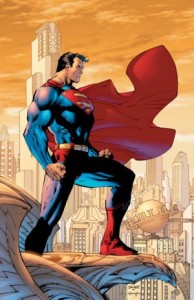 Superheroes are a different breed. For a lot of them, this is literal. Most of the well-known superheroes in the Marvel Universe (Fantastic Four, X-Men, Avengers, etc.) are mutants. One of the central themes is the tension between ordinary humans and those genetically gifted with extraordinary mutant powers.  Other superheroes start out as perfectly normal human beings before something happens to set them apart. Peter Parker is consecrated by the bite of a radioactive spider. The Green Lanterns are called and chosen by an ancient alien race at the center of the Universe and endowed with power rings that let them fulfill their duties as Guardians.

It’s no coincident that one of the oldest superheroes, and perhaps the archetype of the entire genre, is defined in contrast to human beings: Superman. Quentin Tarantino, cribbing from earlier work by Jules Feiffer, included a monologue in Kill Bill that gets to the heart of this:

Superman stands alone. Superman did not become Superman, Superman was born Superman. When Superman wakes up in the morning, he is Superman. His alter ego is Clark Kent. His outfit with the big red S is the blanket he was wrapped in as a baby when the Kents found him. Those are his clothes. What Kent wears, the glasses the business suit, that’s the costume.

The villainous Bill (in the movie) interprets this to be Superman’s condemnation of a weak humanity, but others have suggested a more optimistic explanation for the Clark Kent persona as “Superman’s love letter to the human race in general and to Jonathan Kent in particular.”

In either case, the central point is that superheroes are different, and that a major aspect of what sets them apart is some special or unique ability that is as easy and natural for them as breathing is to us, and yet is totally beyond our abilities. Superman flies without any real effort. The Wolverine regenerates automatically. Rogue effortlessly sucks the life force out of anyone she touches. (Yes, I watched a lot of X-Men cartoons when I was a kid in the 90’s.) What is impossible for a mere mortal is not only possible for a superhero. It is natural.

Which is exactly how many Mormons view prophets.

While we celebrate the idea that anyone can receive revelation, we also emphasize the unique calling of the President, his counselors, the Twelve Apostles, and the General Authorities. There is often an implicit assumption that revelation + authority is a qualitatively different thing than the kinds of revelation we can have access to as mere civilians, but I think that is wrong. Authority, in this case, is kind of like a God-given version of the conch from Lord of the Flies: folks are supposed to pay attention to you when you hold it, but they don’t have to. More importantly: it doesn’t change who you are or what you have to say.

If revelation is a difficult, murky, and evolving process for ordinary members, why should the actual process be any different for those called as leaders? And yet we tend to assume, especially in the midst of difficulty or controversy, that the prophets have only to ask and then all will be revealed. This despite the fact that “ask, and ye shall receive” is a promise to all of us, and we all know form our own experiences that it’s never as simple as ordering something from Amazon. Sill, when we grow impatient with the Lord’s servants, we tend to assume that they could get more revelation faster and clearer if they just tried.

Some of this is understandable. The scriptures often present a narrative in which revelation plays a key role, and the difficult work is not always apparent. When Lamanites attack in Alma 43, the newly appointed Captain Moroni simply asks Alma to ask God “whither the armies of the Nephites should go to defend themselves against the Lamanites.” In vs 24: 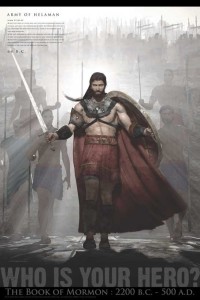 It’s no wonder we get the impression that prophets are super heroes from stories like this. But the story doesn’t say how hard it was for Alma to get this revelation or how sure he really was in it. Do you always know when you receive revelation? I have, at least a few times in my life, received revelation. But when I lay my hands on someone’s head to give a blessing, the cacophony of inner voices tends to be as distracting and confusing as ever. Seeking out the Spirit has never been easy for me and I’ve very rarely been really confident that I have succeeded. I imagine that full-time prophets get much better at it then I am, but then again: they are often asking bigger questions. (Of course if revelation comes with some more extreme manifestation, like an angel or a heavenly vision, it might be easier to be confident. Those kinds of revelations are possible for ordinary members, however, and don’t seem to be run-of-the-mill even for prophets. I’m sure it would have helped Wilford Woodruff or David O. McKay overcome the difficulties Nate Oman outlined yesterday if it were otherwise.)

If Alma’s revelation was really so quick and effective, why didn’t Captain Moroni rely on that trick all the time? Why go to the bother of building fortifications across the entire border if he could just ask Alma to have God send an angelic memo with the time and date of the next incursion? If you condense 1,000 years’ worth of miracles (not counting the Jaredites) into a single volume of text you’re going to get an appearance of ease and plenitude, but careful reading reveals it is not so. Enos spent all day praying for his own, personal witness and I think it would be a mistake to chalk that up merely to his own spiritual ineptitude. Moving beyond just the question of revelation, the superhero motif fails utterly when we consider Alma and Amulek’s awful roles as mere witnesses at the place of martyrdom, and Jonah—pining to watch an entire city be consumed by fire—is surely the Hancock of superheroes: the power and mission are there, but the moral code is not. (The definitive statement in this regard, of course, is D&C 9:8.)

The lack of superheroes is also a key facet of pop culture. The original superheroes of the 1930s were an evolution of the masked avengers like Zorro and the Phantom who had no superhuman abilities. Bruce Wayne as Batman (created in 1939) is one of the last vestiges of this pre-superhero error. He manages to keep up with the supernatural abilities by tapping an exorbitant R&D budget and a bottomless well of morose revenge.  Tony Stark as Iron Man is much the same, another supergenius billionaire able to use technology to hang with the superhero crowd. In their case, however, esoteric technology available to know one else works much as the bite of a radioactive spider or the gift of a power ring to set them apart from mere mortals. 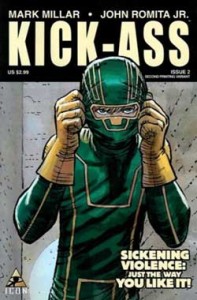 But more recently comics like Watchmen (1986-87) and Kick-Ass (2008-2010) have featured plain old humans who want to be superheroes, but who fall painfully short. Kick-Ass is a teenager who is so severely beaten when he attempts to stop a crime that he loses the ability to feel pain, which is only marginally a special ability. Watchmen is filled with misfit costumed crime-fighters who lack any powers at all (with one exception), who bicker and squabble with nothing like superhuman gravitas, who are overcome by paranoia or alcoholism, and who are spurned and rejected by society.

These stories are pervaded by an intense sense of loss and mourning that show how acutely we wish our mythology were true. Given the disparity between how ancient Greek philosophers talk about God and the well-known Greek pantheon of gods, I wonder if we’ve been misreading stories about Zeus and Hera all wrong. (Not just Plato and Aristotle, either. I’m thinking of B-listers like Anaximander and Xenophanes.) I wonder if they filled a social role more similar to our superheroes than to what we think of when we think of “religion”. (It’s by no means clear to me that the distinctions between our houses of worship and our movie theaters would be as clear cut to an archaeologist two or three millenia hence, and there’s little doubt which would appear to have had the greater prominence in our society.)

We want prophets to be a different breed, set apart, so that there can be superheroes among us. But there are no superheroes down here today. There’s just us, all of us, together.

Note: I’m not recommending a work just because I cite it in a post. More info on that statement here.

19 comments for “Are Prophets Superheroes?”