One of my heroes is Hugh Nibley. I know. I know. How cliche for a Mormon Studies guy. Though it seems almost equally cliche to dismiss Nibley. 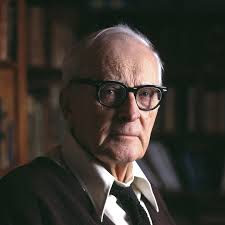 In my second semester of graduate school at the University of Utah, I took a graduate seminar in ethics and public affairs. It was a small group. I was the only active Mormon. However, most of the regular participants in the seminar were very familiar with Mormonism. Jason was a returned missionary who had served in Japan. He worked at Sam Wellers Bookstore in downtown Salt Lake City. He was gay and had left the Church. Another participant in the seminar, Arlyn, was somebody I knew a bit better. He was active in the College Democrats and we had been in some classes together before. He was the youngest member in our little group. He was LDS and he came from the tiny Mormon enclave of Shelley, Idaho. He was also gay.

The professor, Luke Garrott, was not LDS. However, he engaged Mormonism. This is something which none of my other professors at the University of Utah did. I never found any of my professors at Utah to be “anti-Mormon,” but instead they were completely uninterested in Mormonism.

I took many of Garrott’s classes as an undergraduate. He was my graduate advisor for a time and I had been his TA. He was the person who had introduced me to Mormon historian Leonard Arrington. We read from Building The City of God while discussing economic democracy in an upper-division undergraduate course on democratic theory. I felt very comfortable bringing up Mormonism with him, whether in class or when chatting with him in his office.

During this ethics seminar, and I do not remember the larger context of the exact conversation, I brought up Hugh Nibley as an example of a Mormon approach to social and economic equality. Jason reacted quickly with disgust in his voice saying, “Oh, he was a defender of the faith.”

I didn’t know how to respond. I honestly did not know much about Nibley. His book Temple and Cosmos was on a shelf at my home growing up, but I cannot imagine that anyone actually read it. I would not encounter the term “apologetics” until many years later. I had not attended BYU, and only one of my religion classes at Ricks touched on Nibley or related themes (and as a 17-year-old freshman that Book of Mormon class was way over my head).

In that moment, I had no idea what Nibley’s apologetics (as I now know it is called) had to do with his social criticism. I really do not think they have to be, though Nibley surely saw them both as being part of his larger argument for Zion. However, I had to deal with the initial gut reactions or eye rolls that people had to Nibley. That is not all that different now when I bring up Nibley in any variety of Mormon-focused settings. Some of you may be rolling your eyes right now.

The thing that most impressed me from that conversation, now over a decade ago, was how much I liked the sound of being a defender of the faith. Today, while I am not an apologist is the sense of FAIR or The Interpreter, I find myself  regularly, both with myself and in my writings, arguing for the value of Mormonism.

Like Nibley, I cannot conceptualize myself as anything other than a Mormon. At the same time, like Nibley, I find myself as very much a stranger within much of Mormon culture. However, while I am a stranger, I am not a foreigner. Mormonism is my home.

I no longer have a geographical home as an east coast suburban kid who has spent his adult life bouncing around the rural American West. Heck, I no longer felt at home in the Democratic Party and abandoned it. Yet, no matter how heterodox my theology might be, I feel at home in Mormonism.

Adam Miller, conceptualized faith in a way that spoke to me in his new book Letters to a Young Mormon.

“Faith is more like being faithful to your husband or wife than it is like believing in magic,” writes Miller. “Fidelity is the key. You may fall in love with someone because of how well they complement your story, but you’ll prove yourself faithful to them only when you care more for the flawed, difficult, and unplotted life you end up sharing with them.”

← Are Prophets Superheroes?
Literary OTGD #05: Age after age has roll’d away →