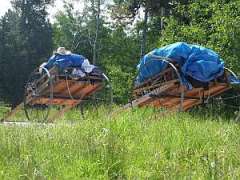 When it comes to handcart reenactments, we spend too much time on all the wrong questions, questions like: How much physical suffering is needed for a youth-appropriate spiritual experience? Personally, I’d like to minimize the suffering in my spiritual experiences, thank you very much. Or anxious hand-wringing, like: Do handcart reenactments distort the historically authentic experiences of pioneers who traveled to Utah by various means and responded in individually determined ways to the contingent experience of physical exertion and deprivation over which a superstructure of religious Exodus narrative had been established amid a plethora of competing counter-narratives? Again, I’m not terribly interested; perfect authenticity is not only boring, it’s inauthentic. Instead, the question we should be asking ourselves is What kind of awesome ward activities can we justify thanks to the examples of pioneer ancestors and/or revered persons of non-direct ancestry?

We had a new bishop. He announced in ward council that he felt inspired do a pioneer trek with the whole ward. I stifled a groan: “Trek,” to me, meant artificially imposed suffering while youth leaders fussed about what was or wasn’t appropriate. I’d never actually done a trek, but that was my impression. It sounded like the opposite of fun.

But the ward council was enthusiastic. My family was enthusiastic. There was no way I was going to be able to avoid the trek. While the logistical undertaking of moving everybody from point A to point B using only handcarts seemed intriguing, I was suspicious of the rest.

Preparations began nine months in advance. There were ward activities. Handcart races. Square dancing. Firesides. Family history nights. Temple sessions. Ward members were encouraged to start walking every day to get in shape. The trek specialist considered several routes, found one she thought would work, obtained all necessary permits, planned menus and daily itineraries, arranged to use the stake’s handcarts, and started acquiring supplies for a three-day, twenty-mile trek.

The ward trek ended up with 75 participants ranging in age from a few months to just short of sixty. We met at 6:00 AM at the trailhead, loaded the handcarts, and started walking. We walked seven miles the first day, camped, hiked eight more miles, camped again, and finished the loop at the trailhead on a Saturday afternoon.

(Or rather, that’s what they did. I was still teaching, so I walked halfway the first day, then turned around and walked out, drove home, got cleaned up, raided the refrigerator, and taught my classes. Then I drove back up to where everyone was camped. The next day I drove out, taught my classes, drove back to the trailhead, and bicycled to the next campsite. The last day I walked the whole way. Going back and forth between civilization and a pioneer trek was not awesome. It was actually kind of annoying.)

A few key ingredients made our ward trek awesome. 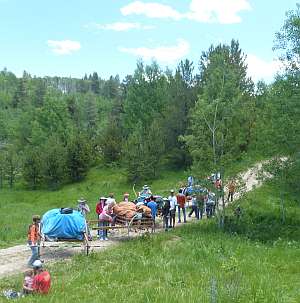 Usually, high adventure trips are the exclusive province of physically very fit young men between the ages of 14 and 17 who are able to acquire some specialized, seldom used, and rather expensive equipment. Multi-day hikes are physically strenuous, and the frame backpacks and other equipment required for hauling and preparing food while hiking are not cheap. Occasionally some young women will justifiably ask, Why can’t we do that, too? But no one even contemplates bringing along the Relief Society. Or the High Priests Quorum. Or the Primary children.

Why not? If only there were some device that would let one transport food, clothing and other essential items long distances without carrying them on one’s back, a device of some sort so that an overnight hike didn’t require the same degree of physical strength… With such a device, one could conceivably use everyday camping equipment and household goods, rather than lightweight but expensive hiking gear. Presumably such a device would involve wheels, but it should be relatively simple, so that it would be inexpensive, and require no external power or fuel source.

Congratulations. You’ve just invented the handcart, and for much the same reason that the handcart pioneers did: to get as many people as inexpensively as possible from point A to point B.

The genius of the handcart is that it extends the possibilities for outdoor experience beyond the usual half-dozen or dozen teenage males to a much larger community. A trek is still a stiff physical challenge, but it’s one that the majority of ward members are capable of attempting. With the event open to the whole ward, the trek is transformed from an adult-supervised situation where artificial groups of healthy teenagers walk on command, to the real and serious situation of your real family (plus whoever else could be spared to help you, minus whatever family members are off helping someone else) carrying most of what it needs to survive under its own power, with no adult leaders keeping you in line because you are the adults. There may be someone telling you when to march and where to stop, but you listen because they know where you’re going, and you won’t make it there on your own.

When I was a teenager, I went on high adventure trips in the Sierras. It was fun, and I don’t want young men to stop going on high adventure trips together. It might be a good idea to break up their monopoly every so often, however. On a trek, the social structure of a ward gets rearranged. Instead of only young men hanging out around the campfire, young men and young women both hang out around the campfire, and the younger kids join in, and adults of various ages. A trek also imposes a degree of economic equality on participants in a way that camping doesn’t, because most of the marks of wealth distinction we have are not useful on a trek, and even fewer will fit in a handcart. Since it’s a handcart trek, lack is coded as authenticity rather than poverty. Being in a forest for three days also gives people a chance to contribute to the ward in ways that are rarely possible otherwise. At church on Sundays, you mostly get a sense of who can give a good sermon or teach a good lesson. Until the warmth of your oatmeal depends on someone else’s high-level talents in wood-chopping and firepit-digging, you may not appreciate how many other skills go into building up Zion.

← The Heavenly Family: A Proclamation
A Look at the Political Affiliations of Some Prominent Members →