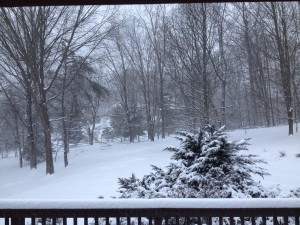 Strutting down the driveway, whistling with a snow shovel over my shoulder I had a moment where I was struck by the absurdity of the scene. I smiled. Then I wondered at it and how it came to be.

Late morning, and gloriously the DC area shuts down at the mention of snow. So I’m still in my pajamas, hanging the picture frames I’ve been meaning to get at for some time.

“James, quick, there’s a car stuck out there. Get your shovel and go help.”

That was it in terms of words and thought. But even if the proximate cause, it didn’t really explain much. Why hadn’t we thought or discussed it some more? Why no hesitation? Why was I whistling like a Disney dwarf?

Growing up in northern Wyoming surely has a lot to do with it. Boy did I have a lot of opportunities to shovel snow and freeze my hands pushing on car bumpers. But I remember a lot more talk and thought going on then – most of it dark and grumbling. I remember scowling when my Dad would wake me early to go shovel neighbors’ driveways, or when my teacher’s quorum adviser would call late Sat night asking me to be to the church an hour early, and then hand us shovels right after sacrament meeting. Our cul-de-sac was never plowed, which meant I often enjoyed cursing the dissonant sensation of sweating and freezing at the same time, plowing tire tracks for my neighbors by hand.

Reality is, I had an awful lot of the natural man in me. Saying that I was less than fond of service projects is putting it mildly. Becoming like a child is certainly not a matter of becoming like a teenager – at least not one like I was.

I can’t remember when the switch flipped, but I’m confident it wasn’t because I switched it. The disconnect between my scowling youth and today’s whistling was, I believe, bridged by community. Or communities. Specifically, my ward communities.

Today’s snowstorm mirrored to me one of the myriad ways in which I have been unreflectively, transparently, and wholly transformed by a multitude of Saviors on Mt. Zion who work collectively as part of an institution audaciously called the Kingdom of God on Earth.

Experiencing it is grace, whether or not I see it. Today, I’m grateful I saw it.

← I Believe in Gender Roles
Good news for Gene Schaerr →